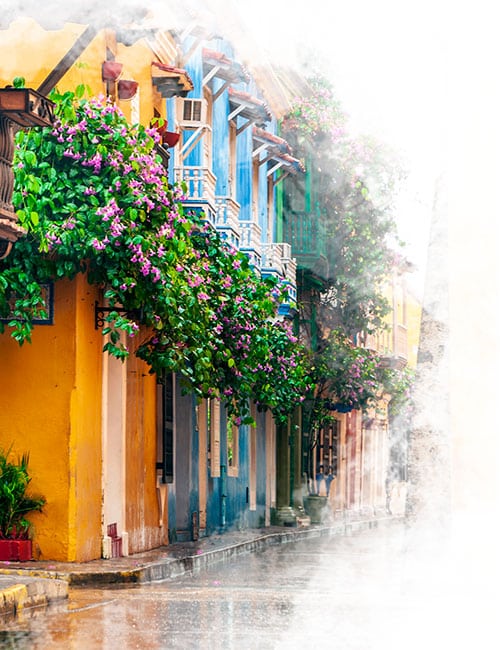 This warm and sultry Caribbean port city was founded in 1533, strategically placed between the Magdalena and Sinú rivers. It became the main port for trade between Spain and its empire in the Americas, establishing its importance in the early 1540s. During colonial times, it was the key port for exporting silver to Spain, and importing slaves from Africa to the Spanish Americas. Also, as it was a walled city (ciudad amarullada), they were able to repel invaders and pirates. Today, people are welcomed to this UNESCO site by lovely tiled roofs, breezy balconies, and flower-filled courtyards.

Cartagena has much to offer any traveler, with a ton of things to see and do. You can wander the Old Town, which is the part within the walls. Here you will find colonial buildings, churches, and plazas, including the Plaza Bolivar, known as the heard of the Old Town. Here you can sit and watch the world go by, with performers playing traditional Colombian music.

You can also visit the Playa Blanca, the most famous beach in Cartagena with is turquoise waters and golden sands. From here you can also travel by boat to visit the Rosario Islands, an archipelago about an hour south of the Bay of Cartagena. Here you may be able to kayak through mangrove tunnels, snorkel or scuba dive, or just enjoy the soft sand and bright blue waves.

Cartagena is full of history as well. You can visit the Inquisition Palace, which shows a darker side of the city’s history, with displays of some of the instruments used by the Spanish Inquisition, as well as pre-Colombian, colonial, and independence-era art. You can also visit the Museo de Oro y Arqueología, which contains an interesting collection of gold artifacts and pottery from the Sinú culture.

With its perfect weather, extensive history, and beautiful beaches, Cartagena is definitely a must for anyone visiting Colombia.