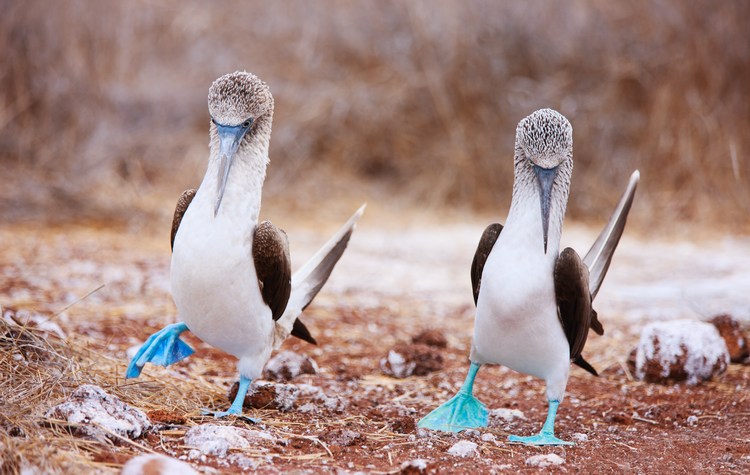 Those conservation efforts are incredibly important for this isolated archipelago, which has some of the highest levels of endemic species found on earth. Indeed, a trip here means a chance to spot some of the most unique animals in the world, including giant tortoises, swimming iguanas, and the finches named after Charles Darwin, among others.

Galapagos is a wildlife lover’s paradise, and we’re showing you why with this guide to the 6 Galapagos Island animals you won’t want to miss on your trip. Plus, we’ll tell you when the best time to spot them is, and how to do it sustainably by travelling with Kuoda. 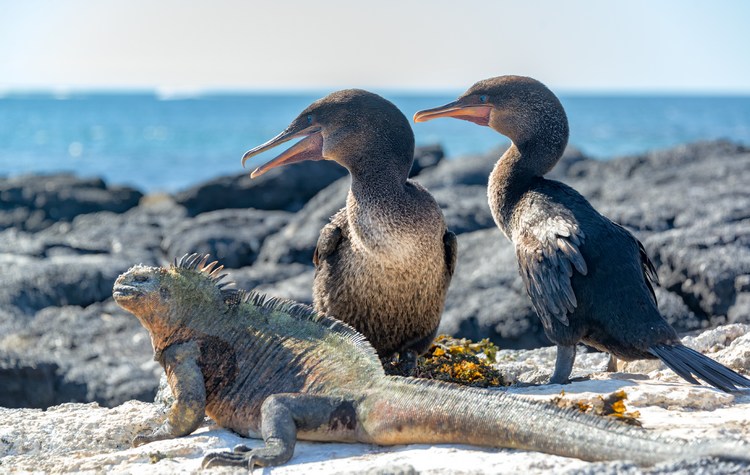 The landscapes of the Galapagos Islands range from coral reefs and highland forests to sand dunes and scrubland. For this reason, the Islands are biodiverse; that is, they’re home to many different plants, animals, reptiles, insects, etc. While this biodiversity is important, it’s actually the endemism that makes Galapagos so special.

But what is endemism? It refers to when a species is only found in one specific location on earth. Galapagos Islands has some of the highest levels of endemism in the world. That’s because, Galapagos Island animals survived by evolving to the unique qualities of their environments. Even between islands, the same species, separated by many years, evolved in different ways.

To put it into numbers, 97% of the reptiles and land mammals, 80% of the land birds, and 20% of the marine species in Galapagos are endemic. Which means that planning a trip here gives you the opportunity to see things you can’t see anywhere else.

So many of the animals in the Galapagos Islands are unique, it’s difficult to narrow down which are the ones visitors are most excited to see. We’ve gathered a list of 6 of our guests favorite sightings. 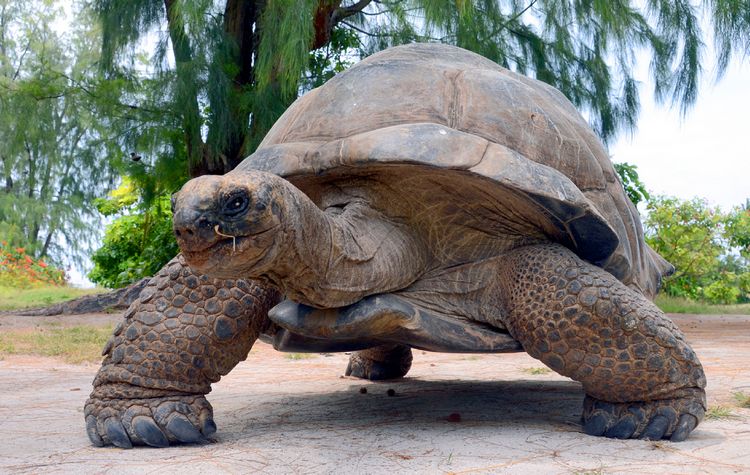 Galapagos is an old Spanish word that means ‘saddle’. Early explorers used this term to describe the giant tortoises that inhabited the island here and so it can be said that Galapagos was actually named for these friendly giants.

The Galapagos tortoises are one of the only two remaining groups of giant tortoises in the world, so a chance to behold these ancient creatures is limited to only the lucky few who make it to the Galapagos every year (or to Aldabra Atoll in the Indian Ocean, the only other place where giant tortoises can be found).

No trip here is quite complete without spotting the Galapagos giant tortoise, but the good news is, they’re easy to find. These giant reptiles originally lived only in Espanola and San Cristobal, but they’ve since spread throughout the Galapagos Islands. 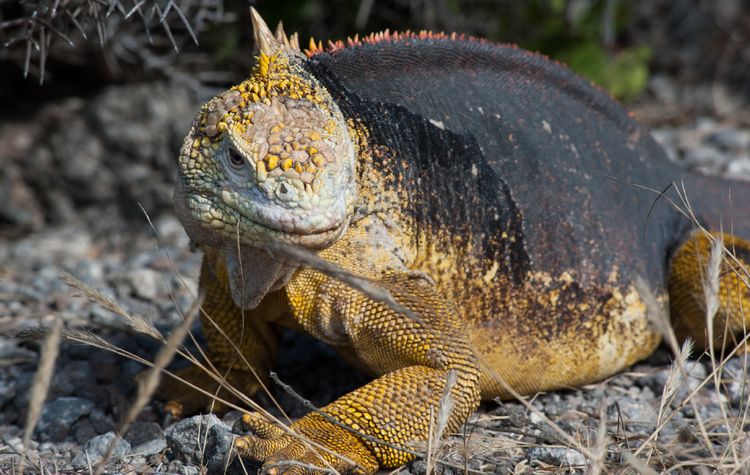 Descendants of land-dwelling iguanas that drifted over to the Islands from South America millions of years ago, the marine iguanas of the Galapagos Islands are the only lizard on earth that goes into the ocean. They evolved this ability in order to feed in shallow waters along the coasts of the Islands.

You can find marine iguanas on almost all of the Galapagos Islands. However, the isolation of each group from one another has caused them to evolve a bit differently. The marine iguanas on each island therefore have their own unique size, color, and shape. 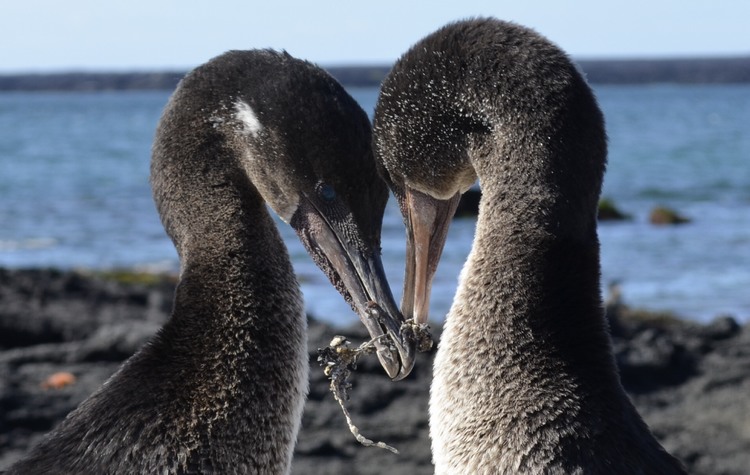 Out of all 29 species of cormorants that exist, the flightless cormorant of the Galapagos Islands is the only species that cannot fly. With very few natural predators, their wings became nonfunctional and they lost the ability to fly.

Because they can’t fly, you can always be sure to find these unique birds on the islands of Isabela and Fernandina. The over 1,000 breeding pairs of flightless cormorants are easy to spot drying their wings out from recent dives along the shorelines. 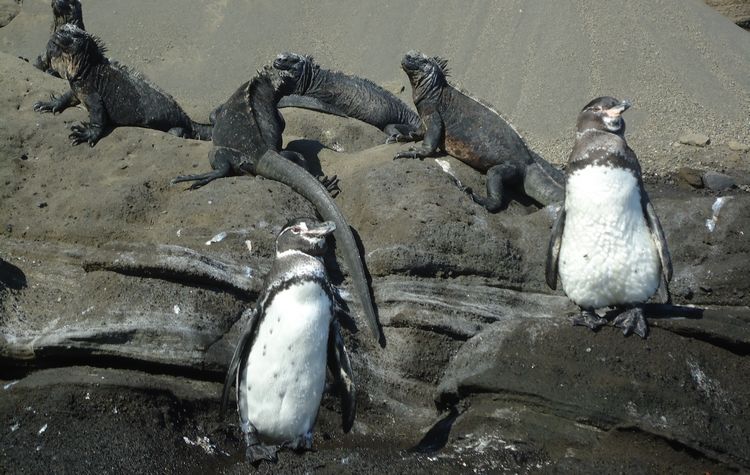 Every penguin species in the world is found south of the equator except the Galapagos penguin. Already a naturally small colony of penguins, their population is decreasing and there are no more than a few thousand inhabiting Galapagos today.

Living predominantly in the western islands, they’re known to wander to other islands on occasion. We usually spot them while they nest and forage along the shorelines, and there’s not a Kuoda traveler who isn’t delighted by the sight of these endangered species. 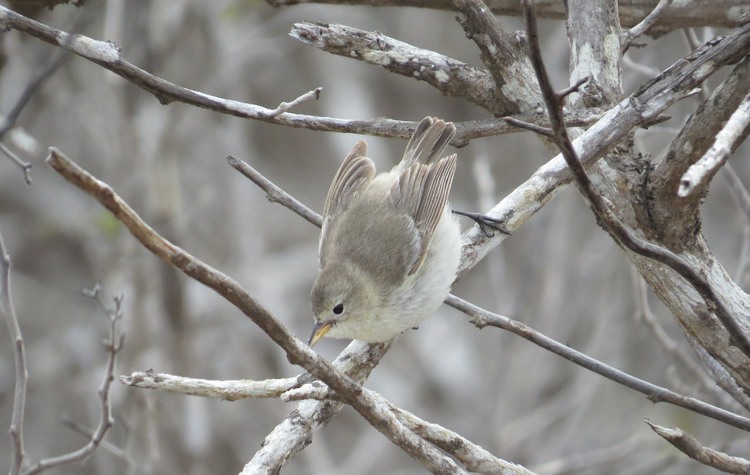 The Galapagos finches are sometimes called Darwin’s finches. It was these finches that played an essential role in Darwin’s inception of the theory of natural evolution.

Noticing that the finches had similar body types and coloration across the islands but different beak structures, Darwin concluded that the finches developed their beaks in accordance with the habitats in which they evolved. There are over 13 species of Galapagos finches all descended from one common ancestor, and we’ll spot them on every island. 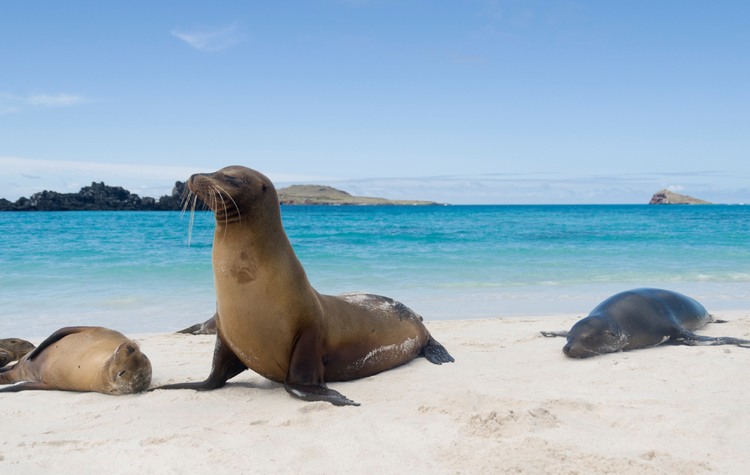 With over 40,000 individuals, Galapagos fur seals may be the smallest species of fur seal in the world, but they’re easy to find. Their huge colonies dot the rocky shores of Fernandina, Isabella, and Santiago Islands.

Unlike other seals, these fur seals are land-lovers. They hunt in the waters at night but spend most of their day lounging on the coastline where we’ll hear them barking from hundreds of feet away.

The Best Time to See Animals in the Galapagos Islands

Between December and May the temperatures in the Islands range between the low 70s and mid-80s. It’s the perfect time to escape the cooler months back home and do some hiking and wildlife-spotting in this (truly) one-of-a-kind destination.

June through to November brings the Humboldt Current to the archipelago and this causes cooler temperatures, though not by much. There tends to be more rain in these months, but it’s a great season for viewing marine bird life who flock to the nutrient-waters that come with the current.

The number of travelers permitted on the Galapagos at any given time is limited. Meaning that, this isn’t a destination that you can plan spur of the moment. But if all this talk of Galapagos Island animals has got the nature lover in you excited, talk to us about the customized and luxury Galapagos trips we can plan for you.

How to Visit Galapagos Sustainably 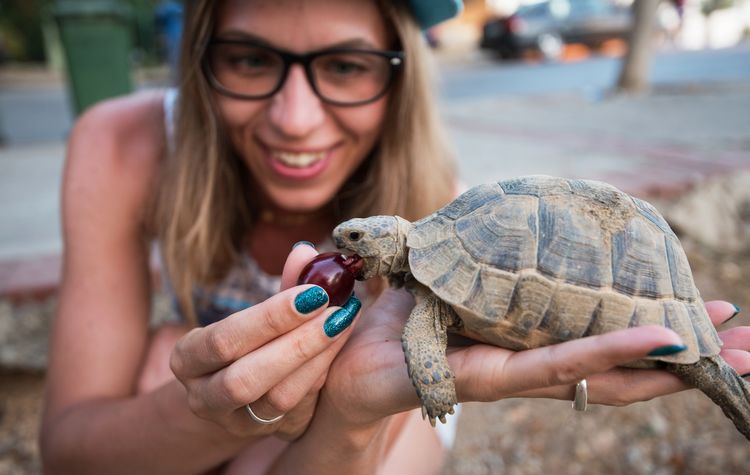 UNESCO named the Galapagos Islands National Park a World Heritage Site in 1978. It was actually one of the first national parks to earn this title.

In 2007, UNESCO placed Galapagos on its red list of endanger sites. The Islands were facing overfishing, population growth, increased tourism, and the introduction of invasive species.

The Galapagos National Park Directorate (GNPD) and the Ecuadorian Ministry of Tourism, together with local communities and tour operators, have since implemented a number of regulations to improve the environmental situation of these delicate Islands. These steps include but are not limited to requiring that tour operators and providers conserve energy and water, recycle and treat waste, use locally-produced products, and hire local employees who are paid a fair wage.

As a result of these efforts, Galapagos Islands National Park was removed from the red list in 2010. And while tourists today can take precautions in ensuring they’re not negatively impacting the land, animals, and communities here, the safer option is to choose a tour operator that knows sustainable travel inside and out.

See the Galapagos Islands with Kuoda 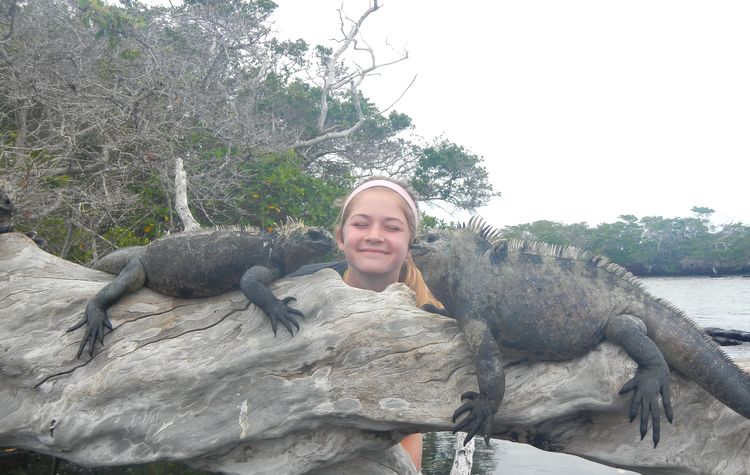 Some companies have taken the regulations set by the GNPD and Ministry of Tourism even further, and Kuoda is one of them. We’re a carbon neutral company that goes above and beyond in organizing sustainable tours that our guests can enjoy without concern for the impact they’re having.

From the sites we visit to the transportation we use to get there, there’s no detail that could impact the environment that we don’t consider. Get in touch with us to start organizing your Galapagos trip today.