The Traditional Fashion of Andean Men 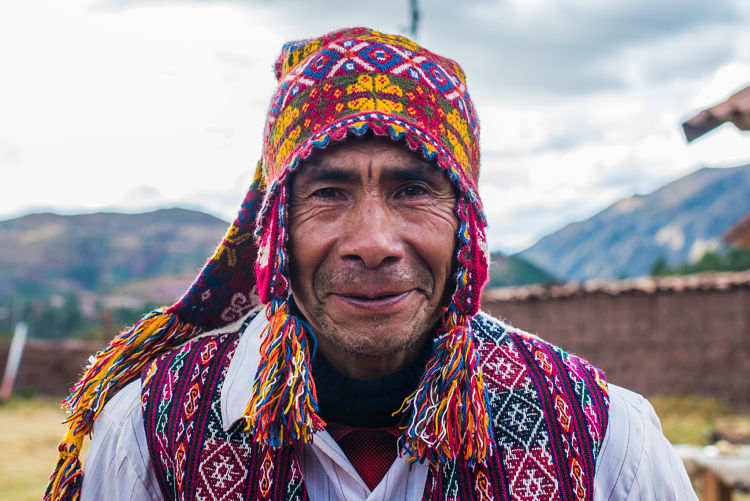 One of the things that will intrigue you during your Peru trip is the sight of Quechua men, women, and kids dressed in colorful typical Andean garb.

In this second installment about Andean traditional fashion, we’ll discuss the types of garments worn by Andean men, including their design, history, and origins. Men and boys in the Peruvian Andes wear several items rooted in long tradition, including belts or chumpis, earflap hats known as chullos, pouches for carrying coca leaves or chuspas, and especially the blanket-like, highly utilitarian poncho. 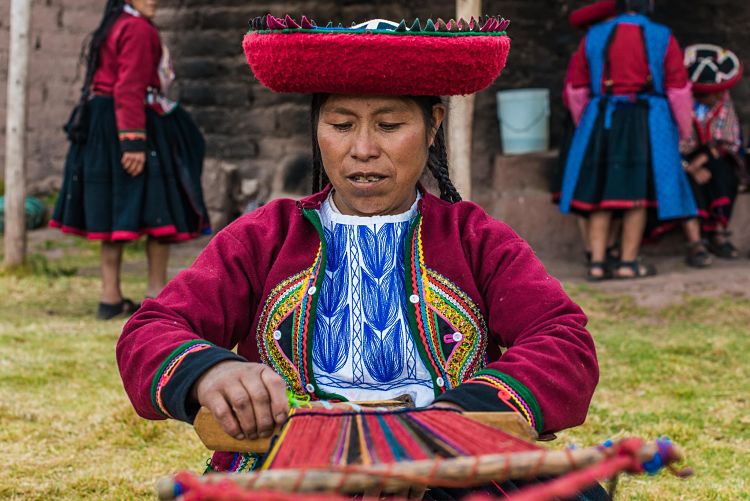 Chumpis and Aguayos – woven chumpi belts are used to fasten pants and also to support the lower back when carrying heavy loads wrapped in woven blankets known as aguayos. (An interesting side note: people at high altitudes have acclimatized over generations to performing hard work in low oxygen conditions. The cardiovascular systems of these folks become physiologically more efficient compared to those of people living at lower altitudes, with increased capacity for extracting oxygen from the thinner mountain air.) You will often spot both men and women carrying seemingly impossibly large loads on their backs, wrapped in an aguayo. They may be loaded with everything from babies to animal feed to firewood. The supporting chumpi belts are often woven with designs specific to the region the wearer comes from. 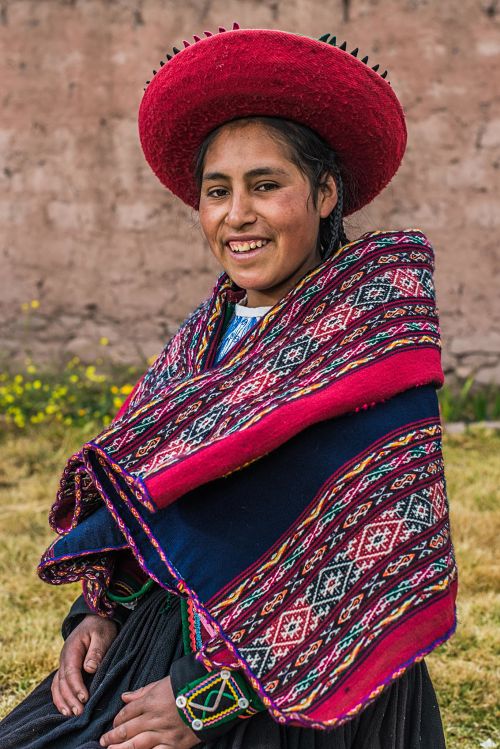 Chullo hats, knit or woven from alpaca or llama wool, are also commonly worn by Andean males. There is some debate among historians regarding the origin of chullos, with some saying they were adapted from hats brought by the Conquistadores and others saying they date from pre-Inca times. Whichever may be the case, all chullos have certain qualities in common: they have flaps to cover the ears and are often adorned with braided ties, pompoms, and beads. They may be quite simple in design or highly elaborate, depending on the wearer. The Q’ero people of the remote Paucartambo region, who maintain rich storytelling traditions and nature-based mystical practices, wear particular types of chullos with colorful beads, pompoms, and tassels, and geometric designs connoting marital status, public position, and region of origin. The earflap hats you might see on the ski slopes this winter in North America are modeled on chullos from the high Andes. 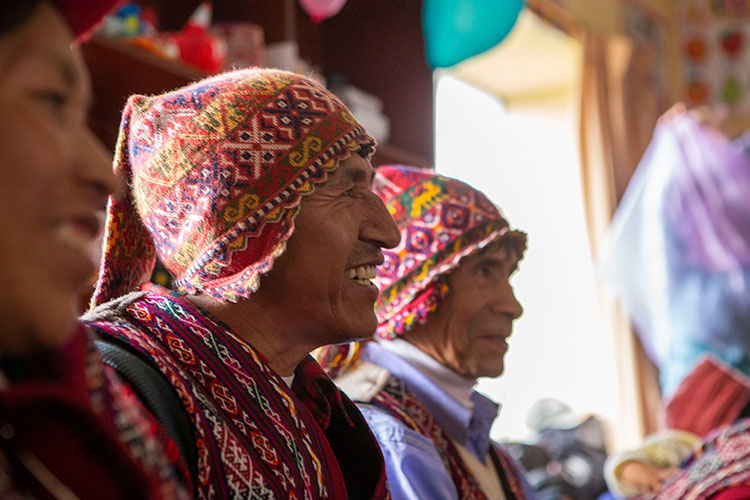 Chuspas, decorated pouches used to hold coca leaves, are another item commonly worn by Andean males. They are often woven with intricate designs and worn hanging down near the waist underneath the wearer’s right arm. Representations of people wearing chuspas on pre-Inca Moche pottery dating from as early as the first century AD have been found on Peru’s northern coast and Andean men still use them to this day. 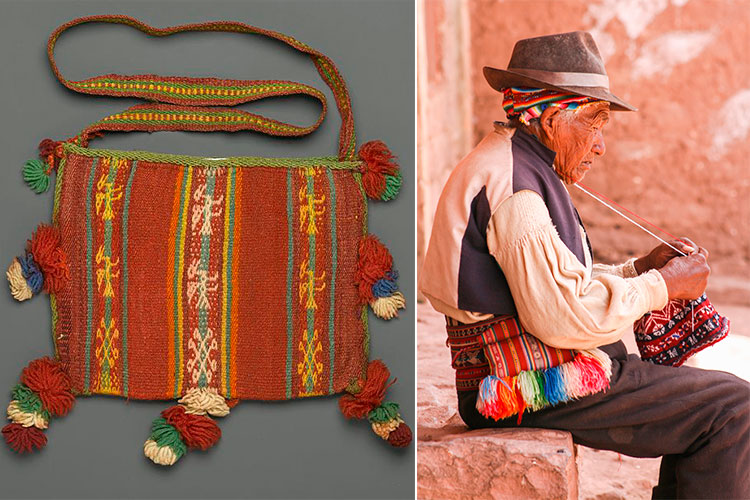 Ponchos – there is nothing like the embrace of a poncho to warm and protect you during the cold weather; few realize that ponchos (both the word and the item) originated in the Andes, and have spread around the world. While they used to be worn almost exclusively by men, ponchos today are worn by all genders and have been adapted to modern tastes. They can be seen on international runways and in high fashion magazines. Ponchos were traditionally sewn together from two rectangular weavings that were created on a backstrap loom; each weaving would be measured to fit the proportions of the wearer’s body. The two pieces are sewn together with an opening left for the head to pass through. The poncho could be of alpaca, sheep, or llama wool, and range from very simple to highly intricate designs, specific to each region. Ponchos from the Cusco and Sacred Valley region are traditionally bright red with geometric patterns. 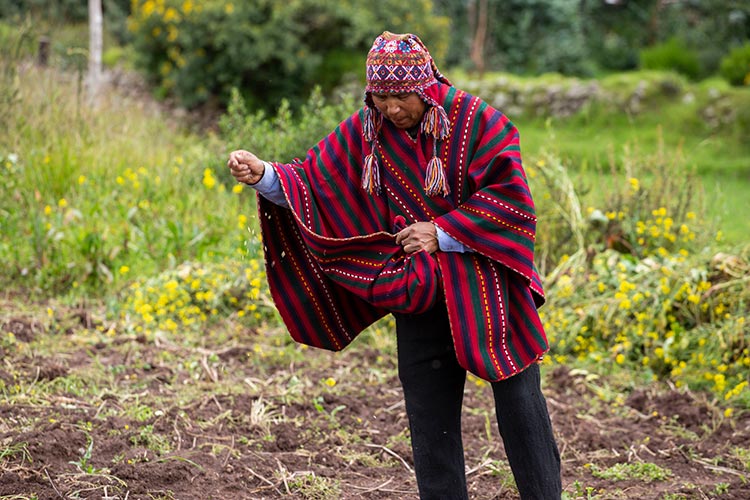 You will have the opportunity to take home a piece of Peru by purchasing a poncho of your own during your Peru vacation.  It will keep you cozy and wrap you in memories of your time spent in the amazing Andes.