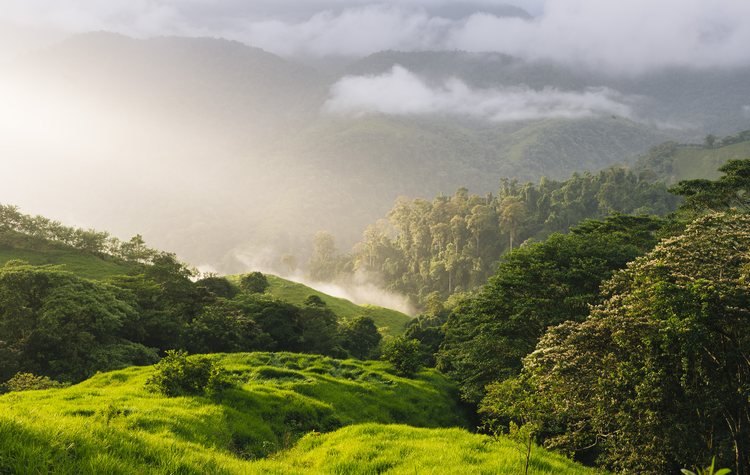 The name Sierra Nevada likely transports you to visions of coniferous California forests and the captivating Yosemite National Park. But did you know that there is another Sierra Nevada Mountain range that lies in northern Colombia?! The Sierra Nevada de Santa Marta mountains, or Sierra Nevada for short, is home to Colombia’s highest peaks, and offers immersive experiences!

The Sierra Nevada de Santa Marta hugs the Caribbean Coast of Colombia, which also makes it the world’s highest coastal mountain system. Aside from these exciting superlatives, we have quite a few compelling reasons why you should include Colombia’s Sierra Nevada in your next Colombia personalized trip.

Both avid hikers and culture enthusiasts can agree there’s a lot to be excited about when traveling through this unique region of Colombia. After all, Colombia’s incredible Lost City can be found in this very spot, as well as two fantastic national parks: the Sierra Nevada de Santa Marta Biosphere Reserve and the Tayrona National Park.

The culture and history 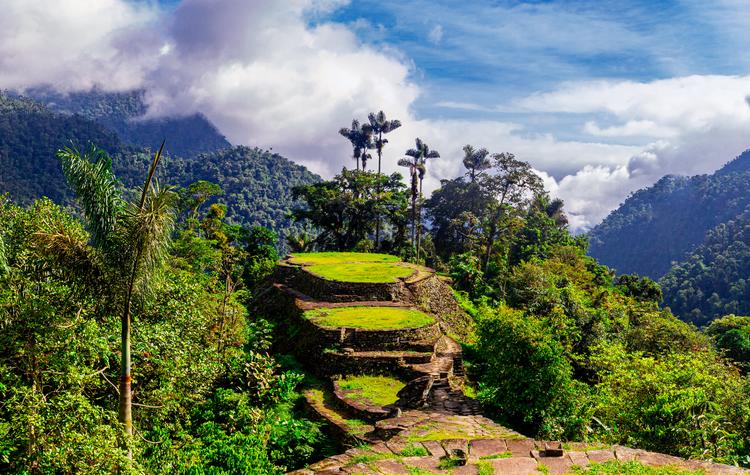 The great Tairona Civilization reigned in this area of modern-day Colombia until the Spanish ruthlessly swept through South America. But despite the onslaught of the Spanish conquest, the Tairona people left both archaeological wonders, as well as an important, and increasingly relevant, living legacy with their ancestors.

The Tairona’s direct descendants now belong to the Wiwa, Kogi, Arhuacos, and Cancuamo indigenous communities, who still protect this land with everything they have. And their fight extends far beyond their ancestral territories, because Tairona culture centered around the idea of a “Universal Mother Earth,” much like the Inca concept of Pachamama in the Andes.

Designated shamans called mamos were the primary leaders in Tairona society and still play a significant role in Colombian indigenous communities. Today, mamos have joined the fight against climate change, to remind us of our integral connection with nature before it becomes too late.

This is why private tours to Colombia that include the Sierra Nevada contribute to the very important mission of regenerative tourism. By visiting in a respectful and meaningful way, you are not only directly supporting local communities, but also re-discovering your own tether to the natural world, which is something you can incorporate into your daily life after returning home. 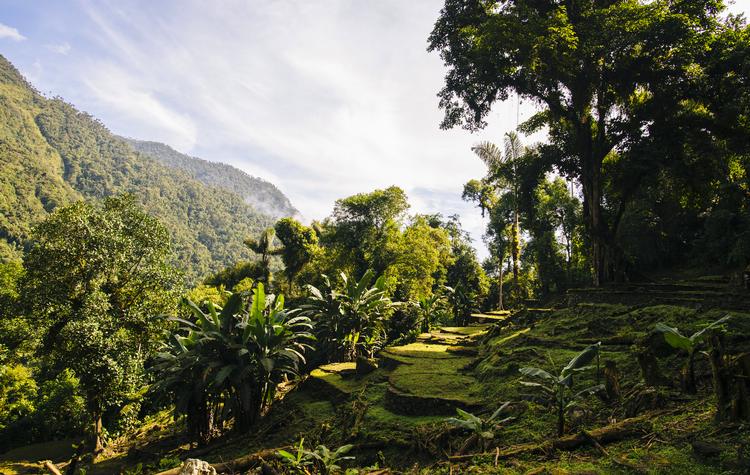 What’s amazing about this corner of the world is the fact that it spans both tropical paradise on the Caribbean Coast, and a starkly beautiful Alpine climate, including fields of glaciers, heading into the mountains. So, if you’re looking for a bit of mountaineering adventure, but also want a few days to relax afterward, you don’t have to travel far to accommodate both.

The main city of Santa Marta claims some of Colombia’s (and many argue South America’s), best beaches! You have just about 100 beaches to choose from, and they all offer the same spectacular vistas of piercing turquoise water and lush, sprawling vegetation.

The temperature also rarely falls below 75 degrees Fahrenheit year-round, and these beaches even rival some of the most romantic spots in Cartagena! So, for a unique off-the-beaten-path honeymoon destination, look no further than a tailor-made itinerary to Colombia that features the Sierra Nevada de Santa Marta. 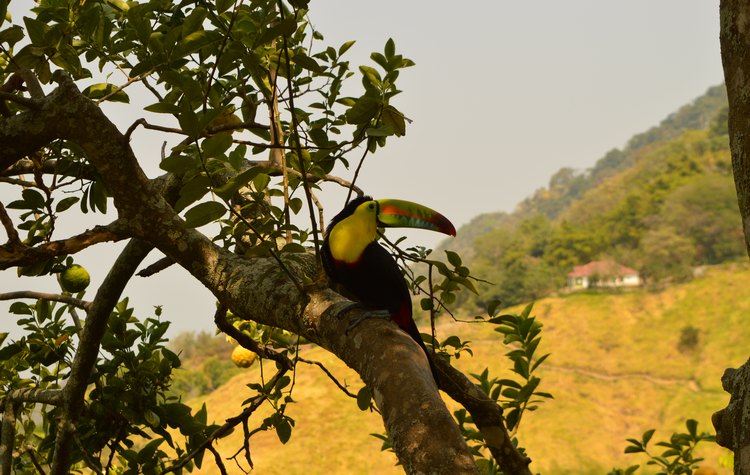 After Brazil and Indonesia respectively, Colombia holds the position as the world’s third most biodiverse nation! In particular, Colombia has the highest total of bird species in the world at a whopping 1,826 – 635 of which live in the Sierra Nevada de Santa Marta region.

Because of these two extremes spanning a relatively small area (roughly 6,500 square miles total), the Sierra Nevada de Santa Marta represents a full spectrum of climates and ecosystems, with nine different biomes. This striking one-of-a-kind contrast has drawn recent attention for international tourism to the area, and more importantly, ethical tourism based on eco-friendly travel.

There’s so much to see and do in this marvelous corner of Colombia, but perhaps one of the most exciting involves climbing towards, and around, the highest peaks of the highest coastal mountain range in the world! Let’s talk about the peaks of Colón and Simón Bolivar and how you can incorporate Sierra Nevada de Santa Marta hikes into your private Colombia journey. 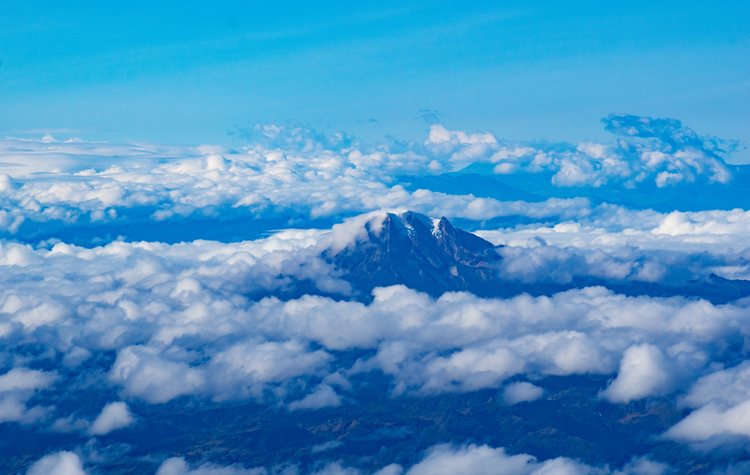 Pico Cristobal Colón is Sierra Nevada’s highest peak at a staggering 18,800 feet above sea level, which is incredible when you remember that the sea is less than a hundred miles away. Very few extremely skilled alpinists can make the summit of Pico Colón. But don’t let this deter you from hiking in this area! There are numerous routes for moderately-skilled hikers with crystal clear and spectacular views of Pico Colón not too far in the distance. 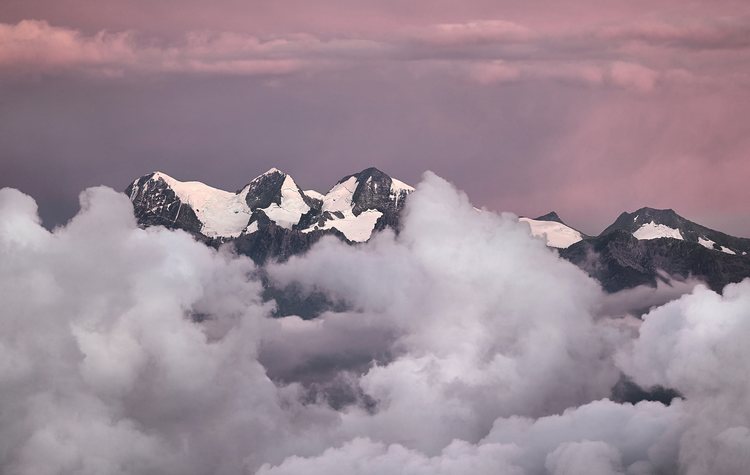 The same goes for Sierra Nevada’s second-highest peak, Pico Simón Bolivar – named after the great Venezuelan who aided many South American countries on their road to independence. Pico Simón Bolivar stands at 18,240 feet above sea level, only a few hundred feet below Pico Colón.

The most traversed (and also one of the safest) trails in the Sierra Nevada is the hike to Cerro Kennedy, with a summit of 10,170 feet above sea level. This is the best lookout point to catch a clear view of both Picos Colón and Bolivar. The total mileage of this trek is about 30 miles, and you need at least two days, but we recommend breaking it up between three to four, to help you acclimate to the altitude.

With this hike, you get up close and personal with the astonishing range of ecosystems within the Sierra Nevada, climbing through various stages of the cloud forest, until reaching the stark mountain highlands. This trail can also accommodate avid and advanced mountain bikers looking for a bit of an adrenaline rush during their private journey through Colombia.

Traveling to the Sierra Nevada de Santa Marta with Kuoda 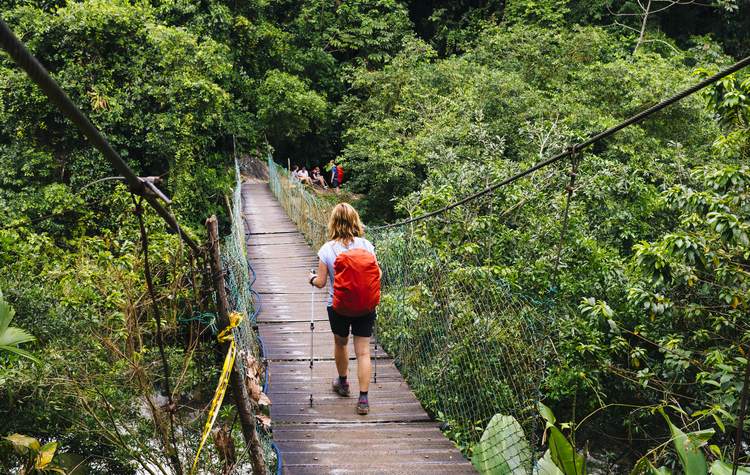 Kuoda Travel is a responsible luxury travel operator, which is why we pride ourselves on putting the welfare of our clients, local communities, and the environment first. Our expert travel designers think about the larger impact on both the local ecosystems as well as local culture with each and every itinerary they curate.

So, traveling with Kuoda to green destinations like the Sierra Nevada de Santa Marta means having a positive impact through travel. In addition to highlighting off-the-beaten-path and green destinations, we also work very hard to make sure we keep all of our accreditations and certifications up-to-date, to offer you the safest and most ethical travel experience possible.