The Top 8 Museums in Guayaquil, Ecuador 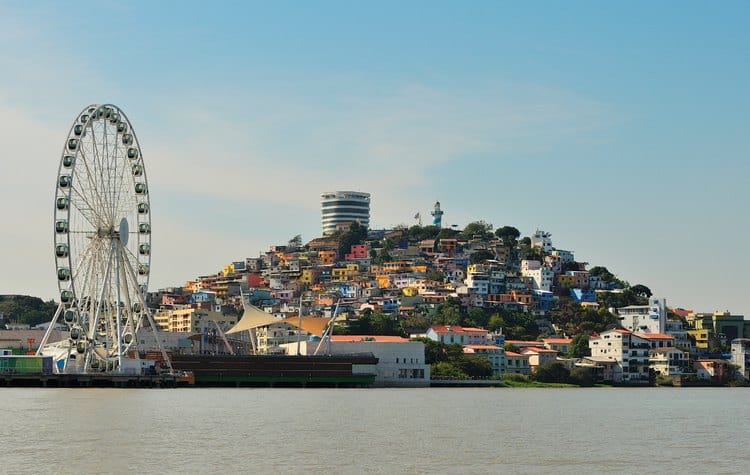 Founded in 1537, Guayaquil has become the most populous city and the largest seaport in Ecuador. For most of the South American city’s modern history, the economic focus has been placed on the import-export sector rather than tourism, thus Guayaquil is most commonly visited en route to the Galapagos Islands. We at Kuoda would argue, however, that the port city is a tropical destination in and of itself, full of interesting neighborhoods brimming with history and culture—not to mention the major resurgence that is making Guayaquil more beautiful, safe and accessible.

Uncover modern and ancient treasures in the top museums in Guayaquil, Ecuador and experience a deeper and more meaningful journey by doing so. From contemporary art to miniature renditions of the city, Kuoda can help visitors of any taste and interest find their ideal museum in Guayaquil.

Known as “the Pearl of the Pacific,” Guayaquil is located on the Guayas River—a geographical characteristic that lends to the city’s iconic riverfront promenade known as the malecón. While often referred to as a coastal city, Guayaquil does not have any beaches of its own. Instead, locals seek sand and waves at nearby Guayas or in the neighboring Santa Elena province.

When to visit Guayaquil 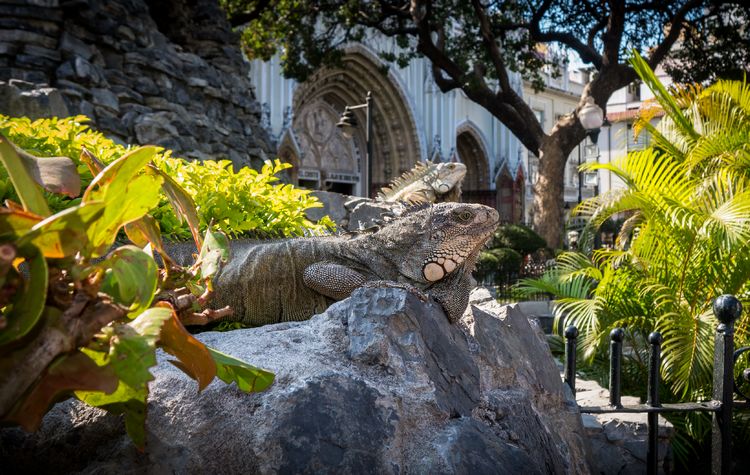 Guayaquil lies just over 150 miles south of the equator and a few meters above sea level, resulting in a tropical savannah climate that is much more stable than that compared to high-altitude cities like Quito and Cuenca. That said, there are certainly rainy and dry months.

The rainy season typically begins in January and runs through April. The remainder of the year is fairly dry and breezy at night. The summer season (December-March) can reach highs around 89°F while the winter months (July-October) rarely dips below 68°F. Tourists from less tropical destinations will certainly feel the year-round humidity. When packing, include plenty of layers as site-seeing by foot is enough to make any tourist work up a sweat in this tropical region.

Whether to escape the rain, humidity or simply to spend a few hours learning more about your travel destination, here are the top 8 museums in Guayaquil that Kuoda travel experts recommend: 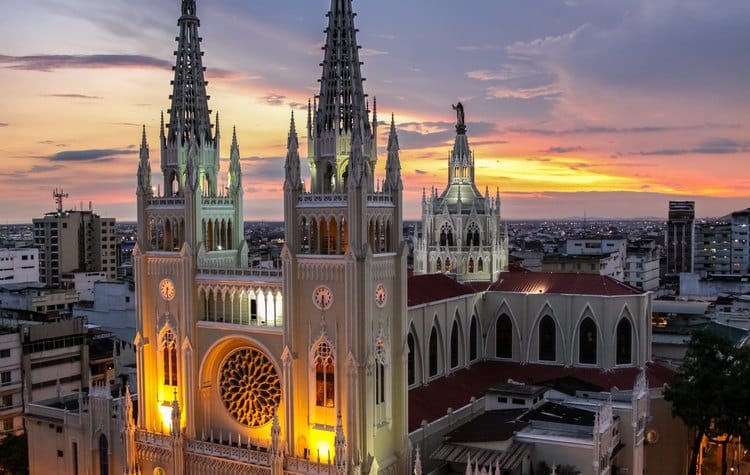 Museum of Anthropology and Contemporary Art

Commonly referred to by its Spanish abbreviation, MAAC, the Museum of Anthropology and Contemporary Art is a massive modern building that rests at the end of the riverfront. Inside the 10,000-square-meter museum, rotating exhibitions from renowned as well as rising Ecuadorian artists share the space with a permanent 50,000-piece collection of pre-Colombian ceramics and ancient archaeological findings. This is a superb space to understand the historical and cultural shifts that have taken place in Ecuador.

Visitors will also delight in the on-site library, cafe and 350-seat theater for live performances as well as films.

Accompanied by an English-speaking guide, navigate the history of Ecuador in the Municipal Museum, just one block south of Parque Bolivar. The eclectic collection includes artifacts from Ecuador’s oldest culture, the Valdivia (3200 BC), Colonial-era religious art and household items, a native species section and even a smattering of modern art.

Despite the varied items, this entertaining museum can be walked through in 1-2 hours, making it a great pitstop on the way to Parque Seminario—Guayaquil’s so-called iguana park, a less than five-minute walk from Museo Municipal.

Remember walking through a fire station as a kid and being in absolute awe of the shiny red trucks and all of the safety equipment? Relive that experience at the Ecuadorian Firefighters Museum, replete with antique firefighting equipment, uniforms and trucks from the 19th and 20th centuries. Inaugurated in the early 1980s, the museum plays an important role in reminding visitors of the importance these heroes play in a global society.

Guayaquil is the heart of the Ecuadorian Navy, so it’s only right that the port city play host to the Modern Navy Museum. Housed inside a three-story building are a compilation of scale models, photographs, documents, weapons and other items that display the evolution of the nation’s Navy, from 1941 until today.

Be sure to check out the basement where an underground exposition is quite fittingly dedicated to submarines.

Step back in time and size at the Miniature Museum of Guayaquil, a cultural center featuring the work of local sculptor artist Edgar Cevallos Rosales. Fourteen dioramas, brought to life by Rosales’ miniature clay statuettes, tell the story of Guayaquil’s history and development. In fact, each scene has a button that, when pressed, plays an audio recording describing the events taking place.

Located at the northern end of the malecón, the museum is a fun spot for travelers of all ages to learn about this tropical destination. Though the museum can be viewed in less than an hour, be sure to give yourself time to admire the details in this handmade didactic project.

Arranged around the four earthly elements—earth, wind, fire and water—the Nahim Isaias Museum displays some 2,500 pieces of art in its three-story building. Paintings and sculptures from the renowned Colonial Art School of Quito as well as a valuable collection of modern art aid in immersing oneself in the Colonial as well as the contemporary culture of Ecuador.

Built between 1936 and 1940, the Presley Norton Museum houses a valuable archaeological display of artifacts deriving from early coastal cultures such as  Valdivia (400 BC -1500 BC) and Machalilla (1500 BC – 800 BC). The majority of the 8,000-piece collection was collected by renowned national journalist Ismael Perez Pazmiño, founder of El Universo newspaper; in fact, the museum’s building was originally his home.

Visitors are welcomed to tour the bedrooms of the old residence and admire the classic Spanish architecture that the original homeowner desired. Before you leave, stop by the on-site souvenir shop or cafe.

Who says that a museum has to be contained by four walls? Though not officially a museum, Guayaquil’s Historical Park is like an open-air gallery of historic and iconic houses. The 8-hectare property is full of diverse vegetation that beautifully frames three defined areas: Wildlife, Urban Architectonic and Traditional.

Appreciate the history of Guayaquil in an outdoor setting as you stroll past traditional pastel-colored homes, a replica of the 19th Century Urban Car and its railways, live theatrical performances (available on weekends and holidays) and local fauna. This is a wonderful experience and perfect prelude to visiting the wildlife on the Galapagos Islands—just contact our travel designers to add on a highly-personalized visit to the archipelago. 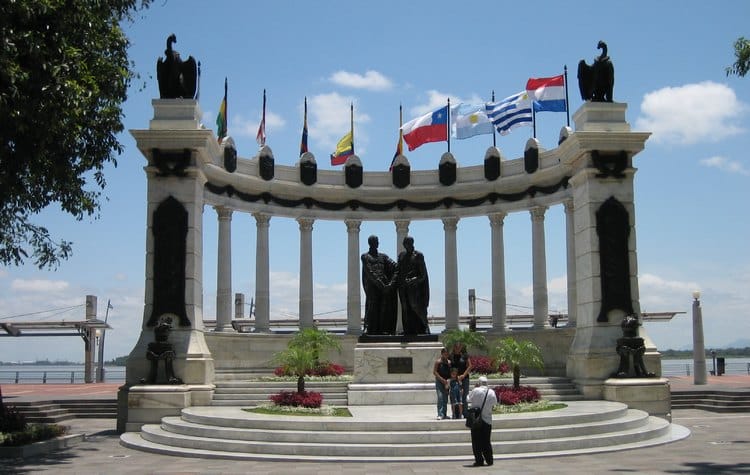 Guayaquil, Ecuador is an unexpected treasure for travelers interested in digging deeper into a destination’s history and culture. The major port city boasts a variety of museums, both indoor and out, that will make your journey to the South American city all the more rewarding and memorable.

From logistics to planning transportation and accommodations, save yourself time and effort by creating a customized Guayaquil, Ecuador trip with Kuoda.