Travel to Bolivia in comfort on this exclusive itinerary. This private Bolivia trip showcases the nation’s rich history and culture. It’s a journey through the country and an exploration through time, from the ancient roots of the Aymara civilizations to the colonial-cast cities of Potosí and Sucre to the cosmopolitan centers of Santa Cruz, Cochabamba and La Paz where tradition meets the 21st century. Ride the world’s longest cable car and gasp at the sight of the colossal Andean peaks rearing up around the lofty city of La Paz; walk among the talismans, aphrodisiacs and amulets at the city’s witches’ market; and discover the silver-laden mines that bankrolled the Spanish empire at Potosí. Scratch beneath the surface of the country as you explore the ancient treasures of Bolivia with Kuoda! 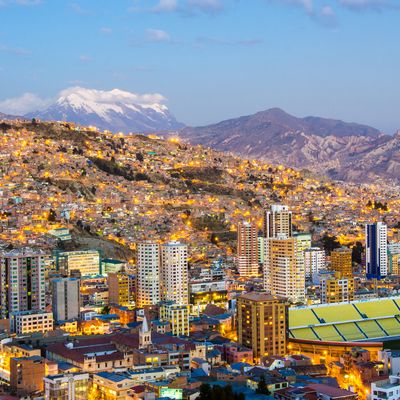 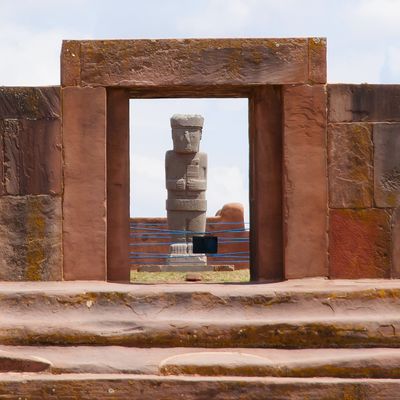 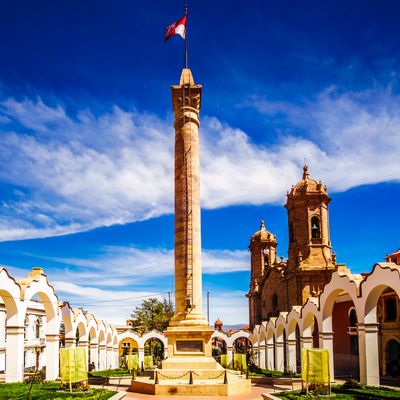 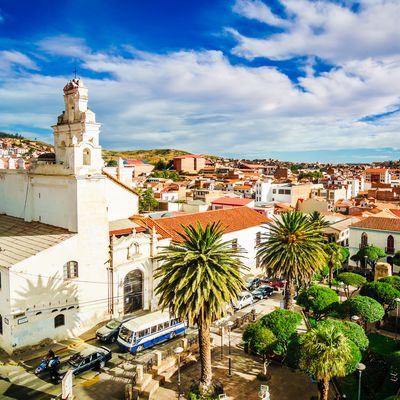 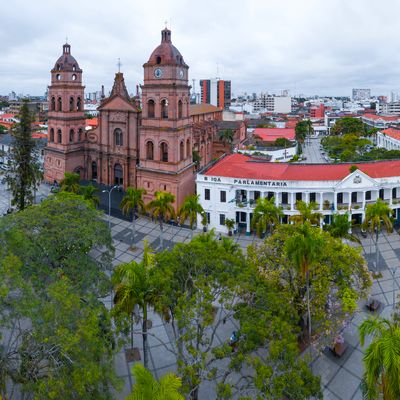 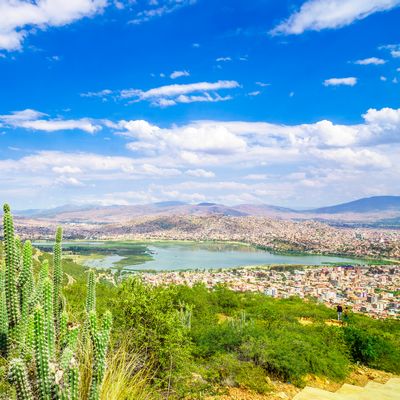 Welcome to Bolivia
You’ll be welcomed to La Paz by your Kuoda host. They will escort you to your hotel of choice, assist with check in and answer any questions, as well as suggesting some tasty dinner recommendations nearby.

This morning, follow your expert guide around the streets of La Paz. During this exclusive city tour, your guide will provide interesting commentary and bring you to noteworthy historical landmarks (such as those on the central Plaza Murillo), colorful markets (including the famous Witches’ Market) and some of the city’s captivating museums. In the afternoon, leave the urban environs behind for a trip out to the Valley of the Moon – so-called for its knobbly pinnacles and lunar landforms, which are caused by centuries of erosion.

Tiahuanaco visit to the Cradle of American Civilization

Day three of your private Bolivia vacation takes you to Tiahuanaco, the one-time capital of a surprisingly advanced though little-known civilization who were thought to peak around A.D. 700. The structures here, among them a great pyramid, the Sun Gate and several imposing monoliths, hint at just how sophisticated these mysterious pre-Inca people were.

Travel from La Paz to Potosi

Tour of Potosí and its Silver Mines

Today, your Bolivia luxury tour continues in Potosí. The mineral-rich mountain that towers over the city is known as Cerro Rico (literally Rich Hill). According to some, this peak has produced enough silver to build a solid silver bridge from Potosí all the way to Madrid.

Venture to the heart of the mountain to see the mine itself, which helped subsidize Spain’s South American Empire. But not without cost to the natives. Poor working conditions led to low life expectancies among miners. Though production is on a much smaller scale today, the mine is still a significant contributor to the city’s economy, and employs about 15,000 miners.

Back in town, stop by the Casa de la Moneda (Royal Mint). Examine the wooden machinery, which was used to make the silver coins for Spain during colonial days and visit the Santa Teresa Museum as well as other key points of interest within the city during your privately guided city tour.

Travel from Potosi to Sucre

Leave Potosí this morning and drive to Bolivia’s constitutional capital of Sucre. Enjoy beautiful mountain scenery along the route. In Sucre, we will bring you to your charming hotel and help you get settled in, before leaving you to relax for the rest of the day.

City Tour of Sucre and Visit to a Community

A guide will meet you at your hotel after breakfast and bring you on a private city tour. Browse the displays at the Casa de la Libertad museum, stop by the San Felipe convent and delight in the spectacular views from the Mirador de la Recoleta lookout point. Continue meandering through the city streets with your informative guide, admiring the colonial architecture, sumptuous churches and the manicured lawns of the city’s central park: Parque Bolívar.

Learn about indigenous ways of life at the Jatun Yampara Community, one of the most ancient cultures of the continent. While here, you’ll also get to see the exhibitions at the Museum of Native Clothing and discover the processes behind making ceramics and textiles, as well as other native constructions. Later, you’ll be dropped off back at your stylish hotel in Sucre.

On day eight, you’ll fly to the jungle frontier town of Santa Cruz de la Sierra. Upon arrival, you will be met at the airport and transferred to your hotel of choice, where you can spend the evening relaxing.

Though Santa Cruz is Bolivia’s largest city (not counting the conglomeration of La Paz and El Alto), though it feels more small town than big city. Its narrow streets, old-fashioned buildings, street stalls and colonial plazas full of people-watching locals, lend it a much more intimate ambiance. Ramble around the city streets, check out the museums and galleries and come dinnertime, take your pick from an array of high-quality restaurants. If you’re looking for a more laid-back way to spend the day, you could simply sit back and get your fix of tropical sun by the hotel pool instead.

Travel back in time on a guided bus tour to the six Jesuit Missions of Chiquitos, which were set up in the 16th century to evangelize the locals. On the way there, stop to stretch your legs at several sites of interest, including leafy parks and flower-filled gardens.

First up is the Mission of San Javier, the oldest of the six. Built in the mid-18th century and inspired by the ideals of Utopia (a perfect society) and Arcadia (an unspoiled wilderness), this mission was restored and brought back to its former glory in the latter half of the 20th century.

Explore the site and enjoy lunch, before continuing on to the larger Mission of Concepción for a relaxing evening.

After breakfast, head to the Mission of Concepción, which boasts a jaw-dropping cathedral and a pretty town full of shops peddling local wares. Come afternoon, head back on the road for a guided bus tour. Stop in San Javier to sample locally produced coffee, before disembarking at a lovely hotel in Santa Cruz.

Today, your luxury tour to Bolivia will take you west and up, up, up until your reach the city of Cochabamba, which sits at just above 8,200 feet. Cochabamba is known as “the City of Eternal Spring,” because of its pleasant year-round temperatures, which allow for al fresco dining, outdoor strolls and all those other Mediterranean delights.

You guide will take you to your comfortable, stylish hotel upon arrival.

This morning, you’ll get to know Cochabamba during a guided city tour that takes in all the city’s noteworthy sights. Stroll down the trendy El Prado Boulevard to the main square, 14 de Septiembre, to gawp at the rather fine cathedral. Take in the exhibits of the University of San Simon’s Archaeological Museum and the Alcides D’Orbigny Natural History Museum. Then witness a contrasting side of the city as your guide brings you to the sprawling La Cancha market, which is so big it even has its own postcode.

End the tour on a literal high as you take a cable car ride (or – if you’re a glutton for punishment and fancy a hike, you can climb up 2,000 steps) to the Cristo de la Concordia, one of the tallest statues of Christ in the world. This immense monument was completed in 1994 and is 14 feet taller than Rio de Janeiro’s famous Christ the Redeemer. Cochabamba’s Christ also offers far-reaching views across the city and the distant Bolivian Andes.

Cochabamba to La Paz and Home

Kuoda staff will transfer you from Cochabamba to La Paz and then to the airport there for your international flight home.

Like the sound of this Luxury Bolivia tour? Get in touch with Kuoda and we’ll start devising your very own customized Bolivia private travel experience.

INCLUDED
NOT INCLUDED
PRICE REFERENCE
An exemplary way for any adventure seeking traveler to experience the best of the region! This sample itinerary is just the way for you to get inspired.
ACCOMMODATIONS
TALK TO A DESTINATION EXPERT
1-800-986-4150
LET’S PLAN YOUR TRIP
ENQUIRE ONLINE
REACH OUT TO A TRAVEL DESIGNER
TELL US MORE ABOUT YOURSELF 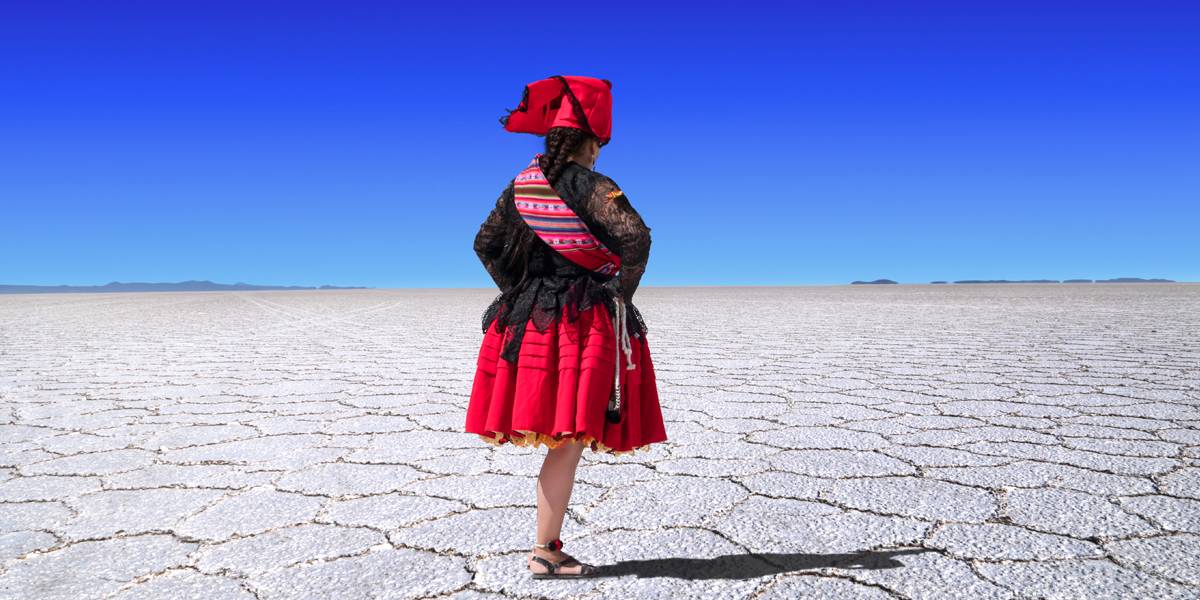 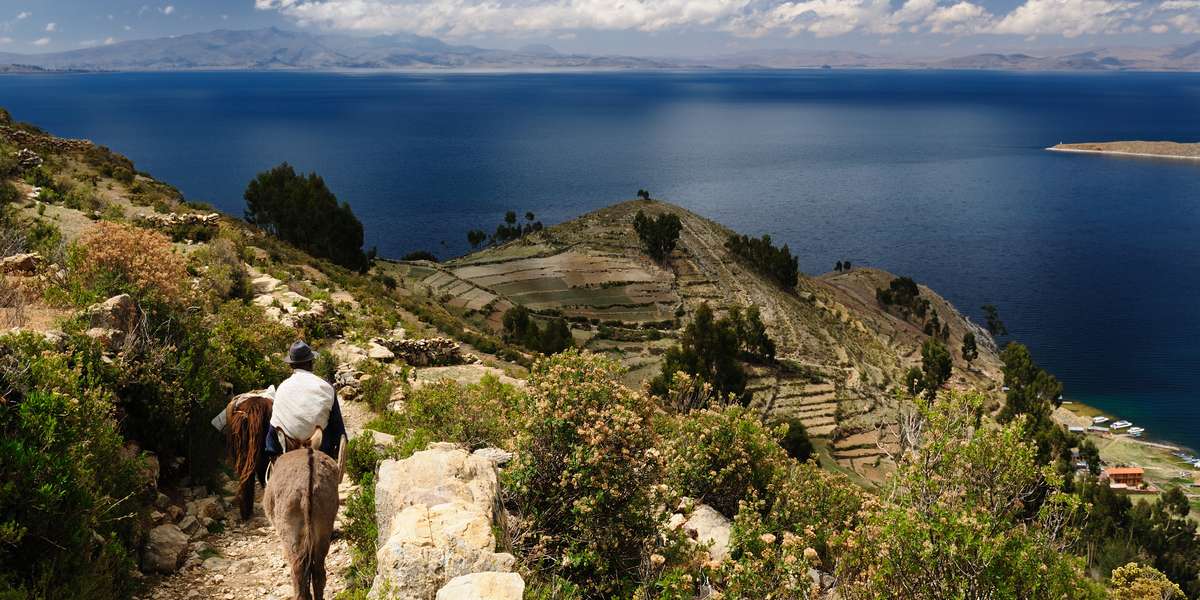 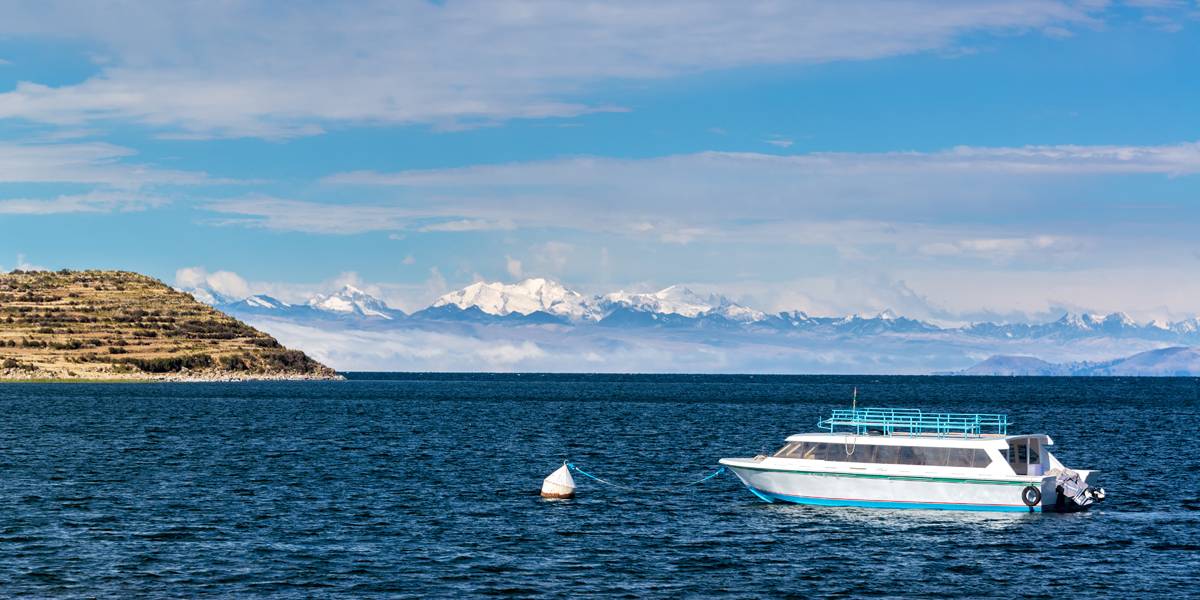 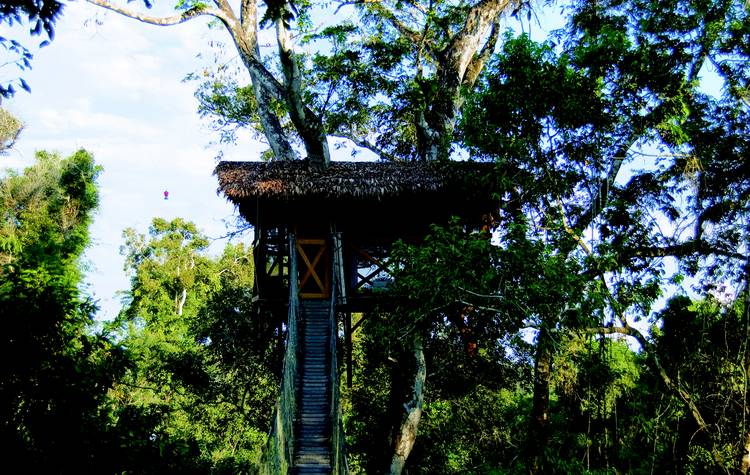 Four Eco-Lodges To Visit In The Amazon Rainforest 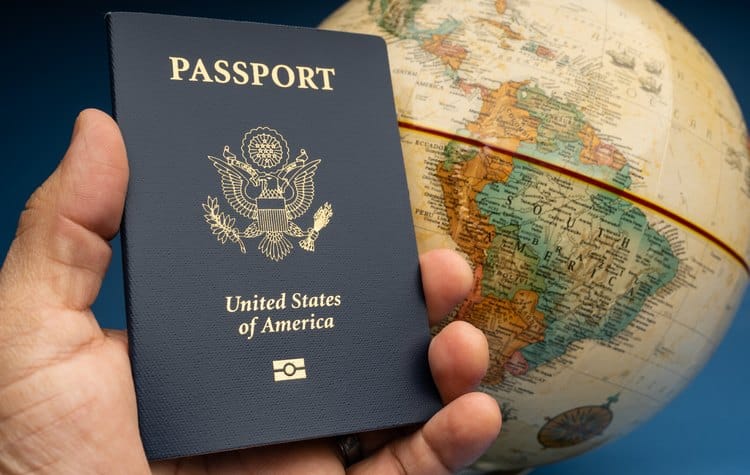 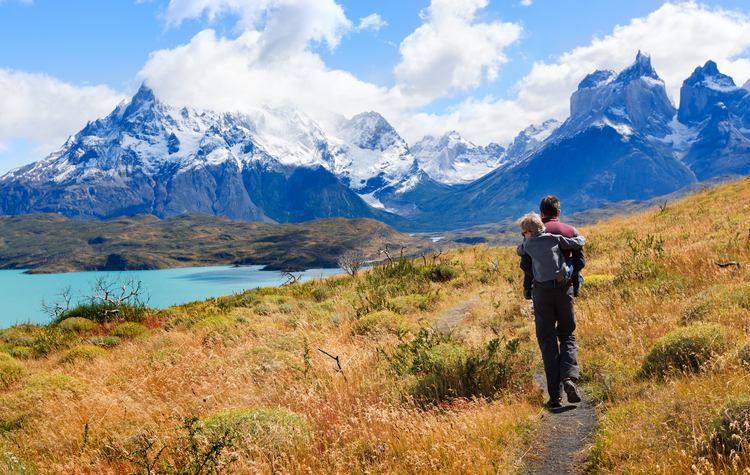 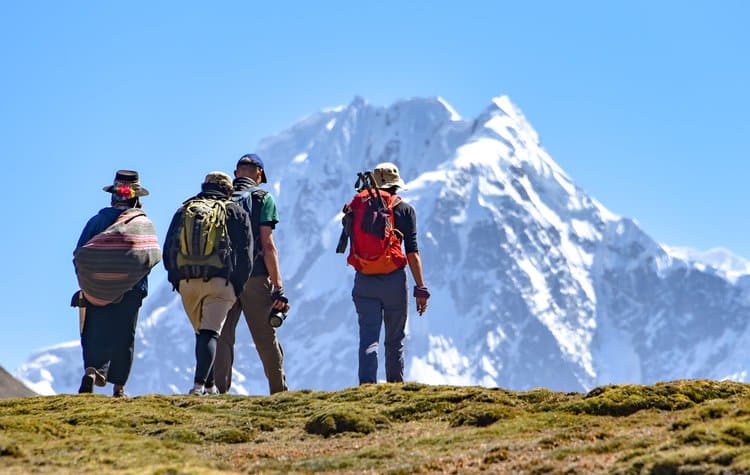