Why Journey to the “Liquid Rainbow” River in Colombia? 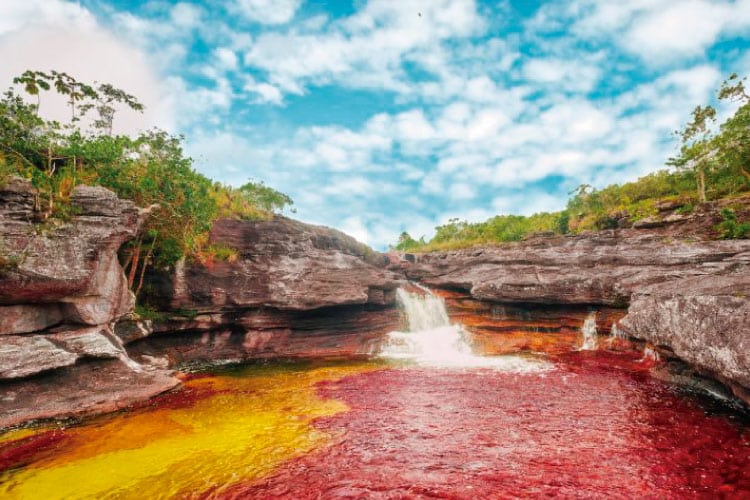 Did you know Colombia is home to the most beautiful river in the world and that this river only unveils its beauty four months out of the year? The Caño Cristales River, aka “the River of Five Colors,” aka “the Liquid Rainbow River,” makes nature’s canvass burst at the seams. Although it is not one of the classic top-five Colombian destinations (due to its somewhat tricky location), the Caño Cristales is an authentic off-the-beaten-path ethereal wonderland!

First thing’s first, the water itself doesn’t create this brilliant array of pink, deep magenta, yellow, green, blue, and even black; the plants growing within the river claim this honor, along with the light hitting those elements just so. Therefore, the Caño Cristales River only shows its true colors from July to November, the spring months in the southern hemisphere.

During these months, this striking technicolor dream comes to life in Caño Cristales, mainly from a plant called Macarenia clavigera that creates an array of deep reds, purples, and pinks. The water level and weather conditions during these months also make the difference. The light hits these pigments brilliantly. Other factors include black rocks, yellow algae, green sands, and blue waters coming together with the Macarenia clavigera; the result is pure magic.

How to get there?

The isolated location of Caño Cristales might deter you from visiting. Still, hopefully, it will inspire you to explore a part of Colombia that until now has been rarely traversed by tourists! You will first need to take a domestic flight into Central Colombia. More specifically, Villavicencio, followed by a smaller charter plane to La Macarena, where you will meet a local guide, who will take you into the exciting wilderness of the Serrania de la Macarena mountain range.

It goes without saying that Caño Cristales is a photographer’s paradise. After the obligatory still photos, videos, selfies, and art-shots, you will find this is also the ideal spot for a fantastic swim! The bedrock of this five-color river swoops and dips in the form of weathered rock pools. The river itself flows very fast, and these currents have contributed to pool formations and deep cavities in the bedrock.

For those already imagining the creepy-crawly wildlife lurking within these pools and potentially hiding in the color spectrum, worry no more! Another distinct feature of the Caño Cristales River is the lack of nutrients to sustain a booming fauna population – this means no fish. In other words, the river is quite devoid of wildlife, except for a lingering amphibian or reptile on the river’s banks (keeping to itself and often in plain sight).

Only recently, in the past 10 years or so, Caño Cristales is open and safe for tourists because in the 2000s and before, it was considered part of dangerous guerilla territory. Therefore, if you are looking for a captivating off-the-beaten-path moment during your once-in-a-lifetime trip to Colombia, look no further than the Caño Cristales River.  Contact us to learn more about crafting your ideal Colombian adventure!