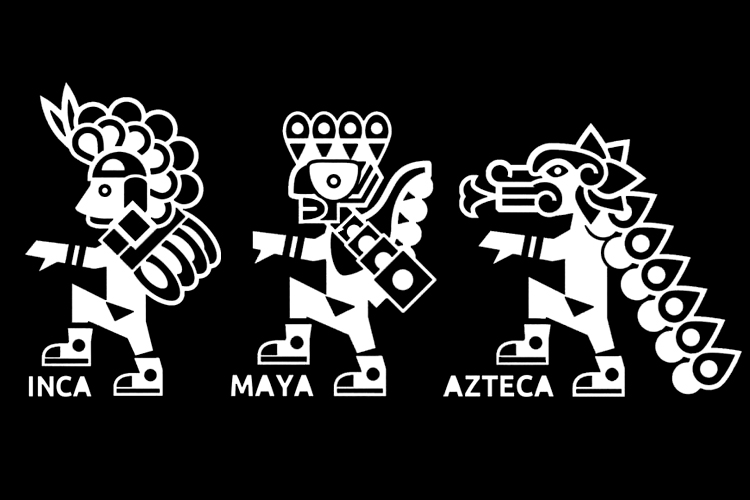 When researching places to travel in Latin America, you will undoubtedly come across information about the people who were there before, stories of great empires and civilizations that have influenced the people and cultures that still thrive today. Sometimes it is easy to get them confused, as well, especially if you didn’t major in Spanish while you were in college. Three of the most famous, and therefore most commonly confused, civilizations south of the U.S. border are the Aztecs, the Mayas, and the Incas. What did these great empires have in common, and what made them very, very different? There is a wealth of information about each of these great civilizations, but here we will try to explain a little bit of what makes each culture interesting and unique.

We’ll start today’s lesson with the oldest, and longest-lasting empire, the Mayas. At its peak, (250 AD – 900 AD), the Maya empire occupied much of the territory that is now northern Central America (including all of Belize and Guatemala), as well as southeastern Mexico, containing the entire Yucatán Peninsula, though their society collapsed around 900AD due to political instability and environmental factors. Maya society had a sharp divide between the upper class, which included the royalty, middle class, which included artisans, merchants, soldiers, and some of the lower ranking priests, and a lower class that included laborers, servants, farmers, and slaves.

One of the biggest achievements of Maya society is their writing system, which was the most highly developed and sophisticated writing system developed in Mesoamerica. Their writing system is a logosyllabic writing, which combines phonetic signs with pictures representing entire words. They also had an advanced knowledge of mathematics, using a base 20 system, and were the first in Mesoamerica to have a concept of ‘zero’. Along with this, they had extremely sophisticated calendars, recording lunar and solar cycles, eclipses, and movements of the planets with incredible accuracy. Astronomy was used by the Maya for divination and prophecy, rather than for scientific reasons or calculate crop cycles.

The ancient Maya had a very sophisticated methods of food production, using many farming techniques which provided a great variety of crops, including maize, sunflower seeds, beans, squashes, chilies, and tomatoes, among others.

Like much of the rest of Mesoamerica, the Mayas were polytheistic, and believed in a supernatural world where powerful deities lived and needed to be satisfied with ceremonial offerings and rituals. One of the most famous Mayan rituals is human sacrifice – blood was seen as important nourishment for the gods, and human life was seen as the ultimate offering of blood to the gods. Those chosen as sacrifices tended to be high-status prisoners of war, or sometimes volunteers, as being a human sacrifice was seen as a great honor.

The Aztecs were a Mesoamerican society which occupied central Mexico. The Aztec culture included different ethnic groups, which organized into city-states and joined to form alliances. The term Aztecs is often restricted to the Mexica people of Tenochtitlan, however it can also be more broadly used to refer to the Nahua peoples of central Mexico. The empire reached its peak just before the Spanish arrived and brought about the fall of Tenochtitlan in 1521, and as such, the Aztec empire.

Similar to the Mayas, the Aztecs had a marked difference between nobility and commoners. Nobility was hereditary, and nobles had certain privileges, such as wearing fine garments or consuming luxury goods, as well as owning land and directing laborers. The second class was made up of commoners, with about 20% dedicated to agriculture and food production, and the other 80% dedicated to warfare, arts and crafts, and trade. They could be enslaved, usually as a way to pay off a debt, but enslavement was not hereditary. Commoners could also obtain privileges similar to those of the nobility by demonstrating prowess as a warrior.

Another similarity to other Mesoamerican cultures, the Aztec society was based around agriculture, growing maize, beans, squash, chilies, and amaranth. They also constructed artificial irrigation systems, and even in cities, people had gardens where they grew maize, herbs, fruits, and medicines. Unlike the Maya, the Aztecs did not have a fully developed writing system, though like the Maya, they did use logograms and phonetic syllable signs

The Aztec religion organized itself around important calendar rituals dedicated to different deities. Similar to both the Mayas and the Incas, the Aztec religion was a polytheistic religious with strong natural roots. One of the central practices was offering sacrifices to their gods as a way of giving thanks for the continuation of the cycle of life. For them, death was necessary to the perpetuation of creation, and so blood sacrifices were needed ensure the continuation of life.

From Mexico and Central America, we move south to the Andes Mountains of Peru and Bolivia. The Inca people started out as a pastoral tribe in the Andes near Cusco, and according to legend, the first Incas emerged from caves in the mountains, captured Cusco, and built the first Inca homes in surrounding mountains and valley. From this small city-state kingdom, the Inca Empire began to expand, and brought much of modern-day Peru under Inca control. Pachacuti split the kingdom (known as Tawantinsuyo) into four regions, with Cusco as its capital. When conquering their neighbors, they always started with diplomacy, offering gifts and peace if they accepted Inca rule, which many did. Those who did not, however, were subjected to military conquest. At its peak, the Inca Empire included all of modern-day Peru, as well as a good portion of Bolivia, southwest Ecuador, and a good part of Chile. In 1532, the Spanish arrived to a Peru and an Inca Empire in the middle of a civil war. This civil war made it easy for the Spanish to conquer the weakened Empire, and the current leader was captured, and executed in 1533.

Unlike the Mayas or the Aztecs, the Incas had no writing system. To keep records, they used series of knotted strings called quipus, as well as ceramics and textiles. Though there are no hard and fast records, oral tradition gives us a good idea of what life was like for the Incas.

The Inca government had a central government with The Inca at the head, and four states – the four suyos of Tawantinsuyo. Cusco wasn’t a part of any of the states, but sort of a city-state apart, similar to Washington D.C. The Incas didn’t have hard and fast laws, but more customs and expectations of behavior, with three moral precepts governing how they acted:

While this gives a good taste of what makes each of these civilizations special, there is so much more to learn. You can also see that you will only learn more about one of these cultures during your trip to Peru – the mountain-dwelling Incas. When you come to Cusco and the Sacred Valley, you will walk down streets created by them and by walls that they built, as well as their mountain retreat that is now considered one of the 7 Wonders of the World – Machu Picchu.