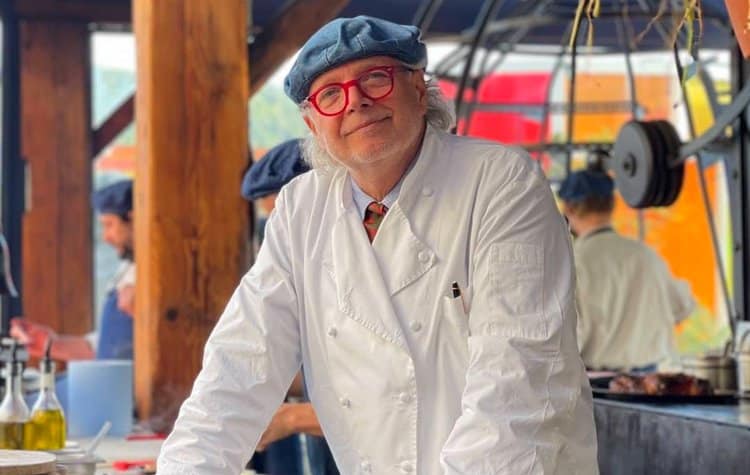 If you’re a foodie, South America has a diverse culinary scene that will satisfy your cravings in any country. But if you’re excited by experiencing food as much as you are eating it, you may have already heard about South America’s most beloved chef, Francis Mallmann.

A chef who walked a different path, he’s famous the world over for his unconventional methods. He left the Michelin world behind to learn and perfect the traditions of his homeland, Patagonia, Argentina. While you can taste test some of his more refined dishes in many of his restaurants around the world, there’s nothing quite like the experience he provides at La Isla.

Food-focused travelers interested in visiting Argentina must know about Francis Mallmann and the adventure he offers on his private island. Learn more about this famous chef and the once in a lifetime opportunity to stay on La Isla in this Kuoda guide to Francis Mallmann.

Who Is Francis Mallmann?

Francis Mallmann is an author, a restaurateur, and most famously, a chef. In fact, he’s likely South America’s most famous chef. He owns nine restaurants around the world, and most are spread out across his home continent. He’s been featured on international television programs as well as on Netflix’s Chef’s Table series.

Mallman opened his first restaurant with a friend at the tender age of 18. He has made his way through the kitchens of Paris and has served some of the world’s most important gastronomical personalities for more than four decades. But what makes Mallmann truly special is the way he cooks.

Mid-career, Mallmann decided to return to his roots and he began to learn and utilize local Patagonian techniques to create high-end dishes. He has mastered the art of cooking over open fires, and he highlights his seven techniques in his book Seven Fires.

While he has a number of homes around South America, Mallmann now spends the majority of his time on La Isla where he hosts guests for culinary experiences unlike anything else.

What Is La Isla?

La Isla is the private island of Francis Mallman. This tiny island sits beneath the glaciered peaks of the Andes off the coast of Argentina. It’s small in enough in size that it can easily be fully explored in less than an hour.

It doesn’t get much more isolated than this. Indeed, you’ll lose phone service on your way out to the island and you won’t get it back until you’re back on the mainland. It’s the perfect spot to experience the rugged countryside of Argentina and eat some of the best meals of your life.

The island has one cabin for guests and another for the nomadic cooks that work with Mallmann. La Soplada, which literally translates to ‘blown away’, is Mallmann’s cabin. And all but a few times per year, he emerges from that cabin to offer a 6-day dining experience for up to ten guests.

Why Foodies Have to Visit La Isla

To keep it personal and exclusive, this 6-day foodie dream experience isn’t on the menu year-round. You have to be lucky to score a spot on the island the few times per year it’s open to guests, where you’ll learn about Mallmann’s cooking secrets and his seven different types of fire techniques for cooking incredible dishes.

Besides learning to master the flames and smoke along with local ingredients, guests are treated to at least one meal per day cooked by Mallmann himself over an open fire. Meals are shared around the fire with some of Mallmann’s favorite wines, expert knowledge, and spellbinding stories. Indeed, the man is known as much for his romanticism and eccentrics as he is for his food.

Where Is La Isla?

To get there, guests fly from Buenos Aires to Comodoro Rivadavia. The flight is approximately 2 hours and 30 minutes. From there, you’ll take a 5 hour drive across the Argentinian countryside to get to your boat. A Zodiac will pick you up from Lago La Plata and in 45 minutes you’ll arrive at La Isla, where you’ll be greeted by Mallmann himself (and probably a lovely glass of wine).

What Else to Do on La Isla

On most days, you’ll have the chance to participate in a cooking class prior to one of your meals (as long as weather permits). This is an opportunity to learn traditional Patagonian cooking techniques from the master of the fire and one of the world’s best chefs.

And while the experience of La Isla is very much about cooking and eating, there’s plenty more to do on this island between gorging on gourmet food by the fire.

A specialist, bilingual mountain guide is employed by Mallmann and is always available to take guests exploring. You can request hikes and boat trips into the Patagonian surroundings, where views of the Cerro El Gorro peaks and the dense Patagonia forest will have you riveted. Even fly fishing can be organized if it so calls you.

On the island itself, guests delight in the disconnection from the outside world. You’ll have access to beautiful Argentinian wines, fires that burn late into the night, an extensive reading library, and a night sky punctured with stars as far as the eye can see.

At Kuoda, we specialize in providing luxury travel opportunities to those who like to travel in style and experience the best of the best. When it comes to food, there’s nothing more exclusive and personal than this 6-day experience on La Isla. Guests are treated to meals by one of the best chef’s in the world, cooking classes, hiking, boating, and more.

If you’re a foodie traveler, this has to be your next stop. Contact Kuoda to start planning today.