How Christmas is Celebrated in Bolivia 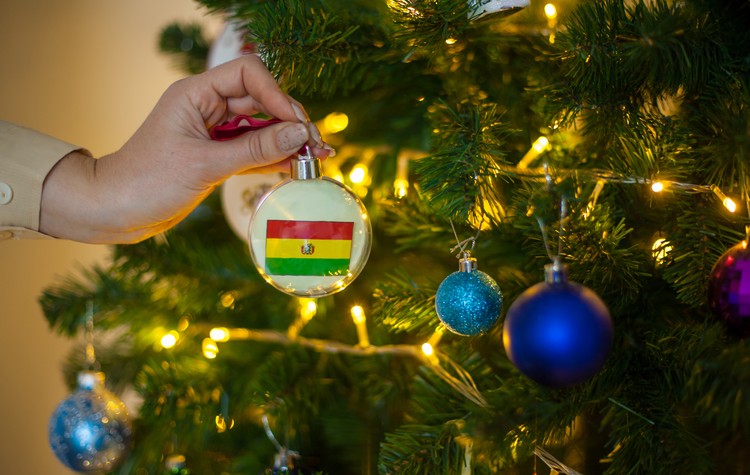 A traditional Christmas in Bolivia has some similarities and some differences from a traditional Peruvian Navidad celebration. A country whose population subscribes to a mixture of Catholic and indigenous beliefs, Bolivia shows elements of this integration of both religions in its holiday festivities.

Since it is also the time of the Summer Solstice, when crops are being taken from the fields, indigenous Bolivians consider this a time to celebrate the harvest. During the Summer Solstice celebration, Bolivians thank the Pachamama, or Mother Earth, for her abundance and ask for a prosperous year to come.

Let’s take a deeper look into how Christmas is celebrated in Bolivia!

As is common in many Catholic countries in South America, the main Christmas decoration in Bolivia is the pesebre, or nativity scene. These scenes, intended to reproduce the city of Bethlehem, can be highly elaborate, with figurines and props of all kinds to represent houses, baby Jesus, Mary and Joseph, angels, the Wisemen, the barnyard animals and much more.

In recent years, increasingly more Bolivian homes, especially in metropolitan areas, are incorporating Christmas trees and lights in imitation of Western traditions. The nativity scene, however, remains the most popular and the most artfully embellished Christmas decoration for most Bolivians.

Putting together the nativity can be a family ordeal, especially if one is hoping to win a local competition. For example, In Santa Cruz de la Sierra, located in the tropical lowlands of Bolivia, locals can enjoy the pleasant climate as they walk around the city admiring the large nativity scenes all vying to win a prize.

In the cooler Andean regions, however, families typically stay home and enjoy a mug of hot chocolate and a humble version of the Bethlehem depiction. The Aymara peoples, who live in the highlands, are known to produce pairs of clay animal figures which they bury in the earth. After covering them with dirt, a hefty pour of beer douses the area as an offering to Pachamama. With this tradition, farmers are asking for more of these animals (typically cattle and sheep).

Like Peru, the most important celebration takes place on Christmas Eve. Many families attend the midnight mass, or Misa de Gallo, on December 24. Gallo means rooster: the mass is so-named because folks return home around the time the roosters start crowing to greet a new day.

It’s a Bolivian tradition to bring two small presents to the midnight mass: a figurine of the Niño Manuelito (Baby Jesus) and an accompanying gift representing the person’s trade or profession. So, a baker might bring a loaf of bread or a cobbler a new pair of shoes. Along with a Jesus figurine, these gifts would be an offering and an appeal for abundance in the New Year.

After mass, it is a Bolivian custom to enjoy a hearty Christmas picana. This festive soup is made with several kinds of meat, such as lamb, beef, and chicken, and vegetables like squash and corn. Hearty and nourishing, the soup may be accompanied by a cold refresco (a drink made of seasonal fruit that is prepared in large batches), roast pork or beef, a variety of fruits and a salad.

On Christmas morning, December 25, many Bolivians enjoy hot chocolate and buñuelos, deep-fried balls of dough flavored with cinnamon and sugar. Traditional Aymara families may snack on jakhoilisa, a biscuit made with quinoa.

From nearly anywhere in the country, the sound of firecrackers can be heard in the background as families celebrate throughout the night.

In Bolivia, most of the gift-giving occurs on January 6, during the feast known as the Epiphany. Somewhat akin to the hanging of Christmas stockings by the chimney is the Bolivian custom of leaving shoes out on the doorstep. To the delight of children, the shoes are magically filled with presents when they open the door in the morning.

If your trip to Bolivia falls over this special time of year, ask your Kuoda travel designer where to find the best picana, and keep your eyes out for elaborate nativity scenes during your December holiday in Bolivia.