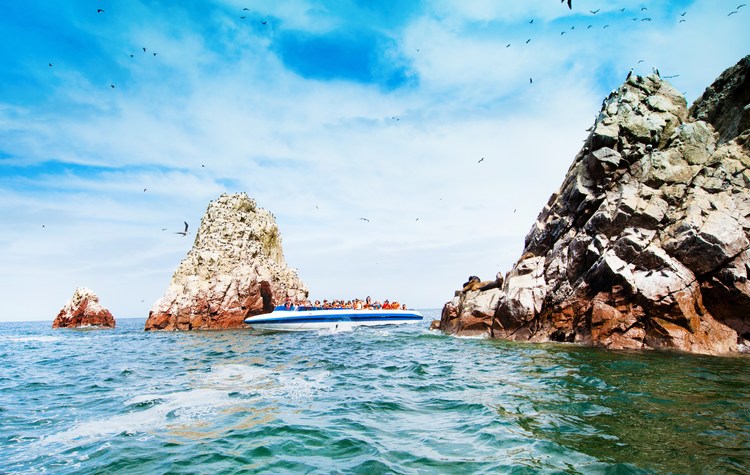 For travelers that love nature and wildlife, the Galapagos Islands may be the ultimate destination. It’s full of native and endemic species that you won’t find anywhere else on earth.

But not everyone has the time and the budget to make the trip out to these islands off the coast of Ecuador. Fortunately, Peru has a smaller group of islands that offer a very similar experience for far less of an investment.

The Ballestas Islands are home to spectacular bird and marine life that rival that of the Galapagos in number. On these tours, you have the opportunity to get up and close and personal without disturbing the animals or the beautiful stone habitats in which they live.

A visit here can be combined with a number of other must-see sites in the south of Peru. Read on to learn more about the Ballestas Islands landscapes, wildlife, history, and culture and why Kuoda recommends adding this to your Peru itinerary. 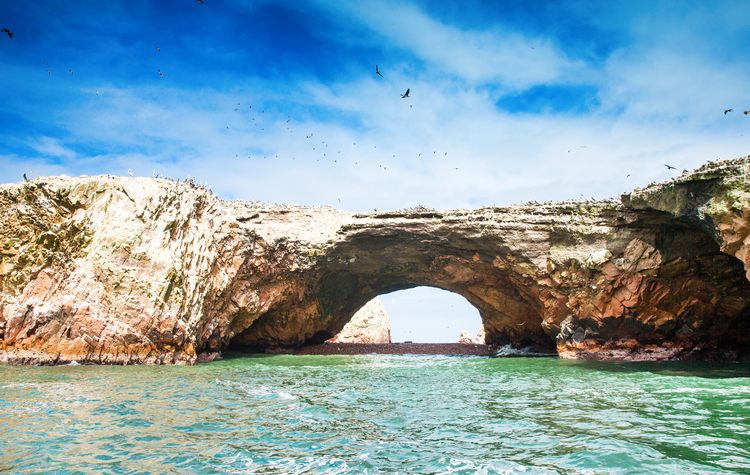 The Galapagos Islands are an archipelago of 19 islands and many smaller inlets located over 600 miles off the coast of Ecuador. Both the land and sea are protected, making the islands a double World Heritage site. Galapagos is well-known for its unique and abundant flora and fauna, much of which cannot be found anywhere else in the world.

The Ballestas Islands are the number one reason most travelers come to Paracas on the southern coast of Peru. The three main islands, Ballesta Norte, Ballesta Central, and Ballesta Sur, are part of the Guano Islands, Islets, and Capes National Reserve System.

For travelers that love wildlife, the islands are more important in their role as a sanctuary for marine fauna. They’re also a great alternative to the Galapagos Islands when either time or money is limited. 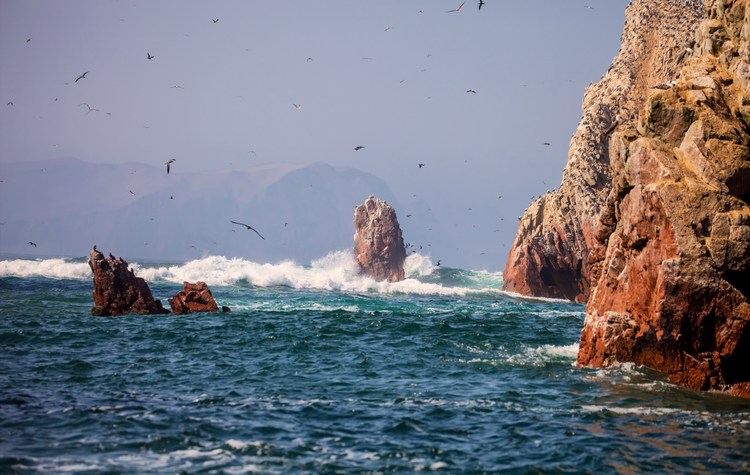 The Ballestas Islands are protected for conservation reasons so the only way to visit them is via a boat tour. The tours take off from El Chaco, or the “town of Paracas”, and last just over a couple of hours.

On your way to the islands, you’ll be treated to views of Peru’s desert coastline. Golden mountains of sand and brush as far as the eye can see will transport you into another world. But it’s the geologic formations of the islands themselves that are most striking for most visitors.

Indeed, the islands are named for their distinctive rock-arches. ‘Ballesta’ means ‘archer’s bow’, and the reason for that naming is obvious in the shapes of the caves and arches carved by the movement of rough sea over thousands of years. In colors ranging from smoky grey to scarlet red, the landscapes of the Ballesta Islands certainly rival what you’d see in Galapagos. 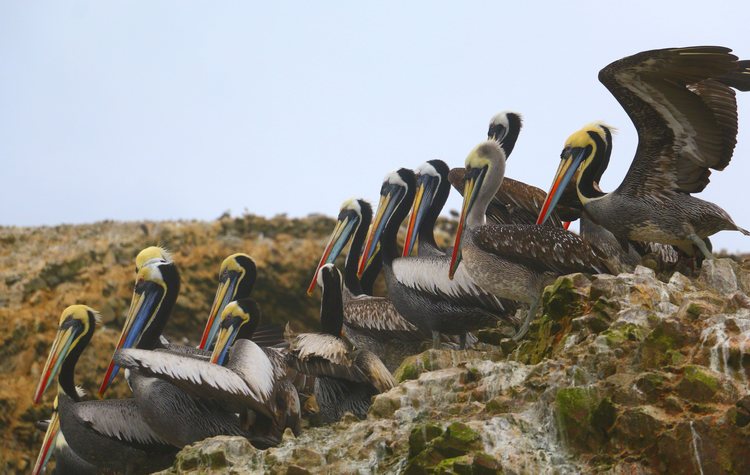 Wildlife thrives in Ballestas Islands. The cold waters of the Humboldt Current pull up lower temperatures and nutrients from the ocean floor and create the perfect conditions for all kinds of marine fauna. And the tours here get you as close as you possibly can to all that life, without causing any disturbance to the creatures or their natural habitat.

So, what can you expect to see on a tour of Ballestas Islands?

You’re sure to encounter birds in numbers you’ve never seen before. Among them are red-billed Inca tern, Kelp gulls, Peruvian boobies, pelicans, cormorants, and even the Humboldt penguin, which only populates the coasts of Peru and Chile. 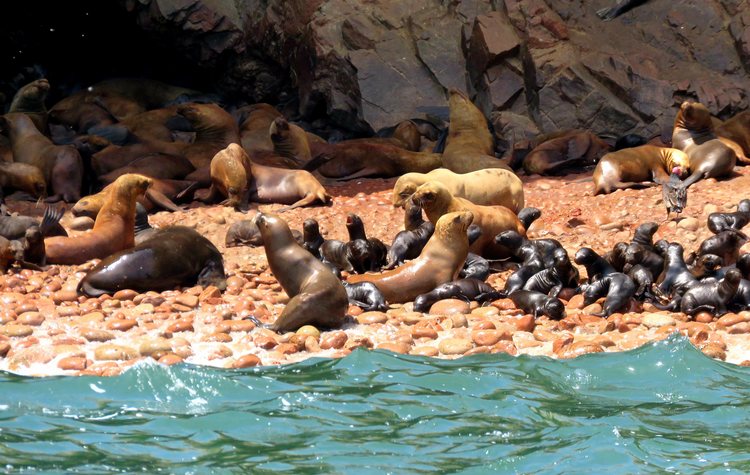 Many visitors are delighted by the sea lion populations here. Because they’ve been protected for so long, these marine mammals have no fear. They’re incredibly friendly, often swimming up next to and alongside tour boats. South American fur seals can also be spotted on the islands, but they’re more likely to be lounging on the rocky shores than playing with the visitors.

Depending on the season, you might spot some of the larger marine animals that frequent the area. Whales, dolphins, and otters aren’t uncommon in these parts, and you may even glimpse a gigantic leatherback turtle on your way out to the islands. 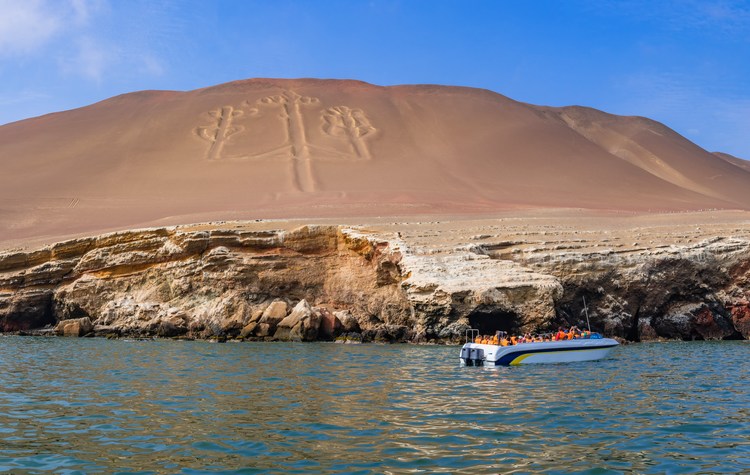 To get to the Ballestas Islands, visitors first need to travel to Paracas. Approximately 150 miles south of Lima, this resort town is located on the coast of Peru in one of the country’s oldest regions. The history of this region dates back to at least 900 BC and those ancient beginnings can be explored in a number of cultural sites in the area.

The most notable of these historic sites is the Candelabra Geoglyph. Nearly 500 feet in height and carved into a sand hill along the coast, nobody knows who built this geoglyph or why, but it’s certainly breathtaking. For more enormous glyphs with mysterious origins, check out the Nazca lines. Flights over the lines takeoff from a small airport in the town of Pisco, just north of Paracas, or from the larger city of Ica.

The Juan Navarro History Museum offers even more fascinating history. It’s home to ancient skeletons that have interested scientists and historians since their discovery. These skeletons have elongated skulls, an ancient practice of the Paracas culture that dates back between 700 AD and 200 BC.

Paracas itself is a small tourism hub with restaurants, local shops, and daily guided tours. If you only have one or two nights here, be sure you try the seafood. While everything that comes out of the sea here is fresh and delicious, the ceviche is not something to miss. 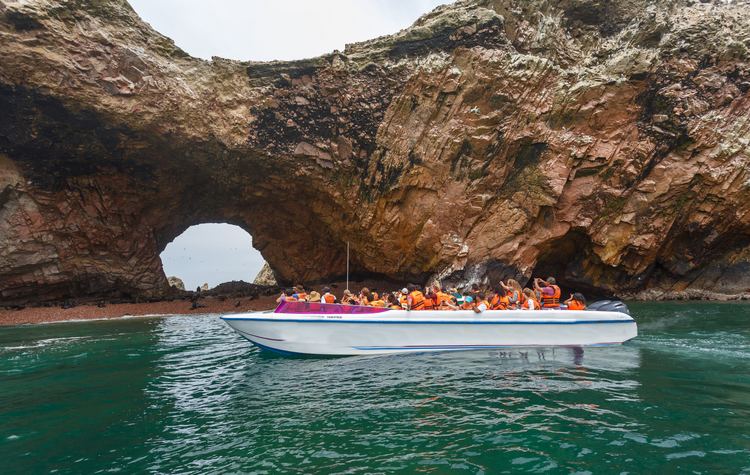 If you can’t make it to the Galapagos Islands, Ballestas Islands in Peru are a great alternative. These geologically unique and beautiful islands are a wildlife hotspot that can be visited on a half day trip. And a visit here puts you in the cultural and historical center of Paracas, with endless options for exploration.

Kuoda can add a tour of Ballestas Islands, Peru to your itinerary in a snap. Let’s start planning your luxury Peru vacation today.