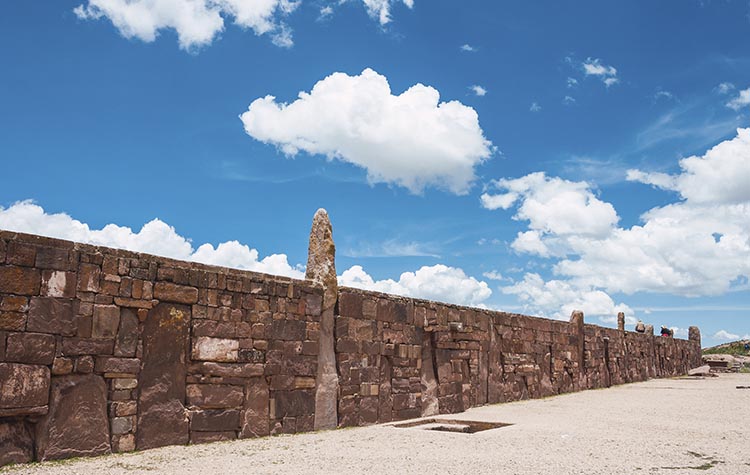 Tiahuanaco Bolivia, or Tiwanaku in the Aymara language, is an ancient civic and sacred site containing former pyramids, enclosures, gateways and monuments located in western Bolivia close to the southeast shore of Lake Titicaca.  Standing at an altitude of 3850 meters, Tiahuanaco Bolivia was the political and spiritual capital of the Tiahuanaco Empire between 200 and 1000 CE.

This extensive archeological site has been studied and excavated since the 17th century and also suffered some colonial destruction in the past. Tiahuanaco Bolivia was designated a UNESCO World Heritage Site in 2002, and it is a national museum and site of political importance today. It also serves as a significant cultural and religious site for the indigenous Aymara people of Bolivia.

Most people travel to South America to learn more about the Inca Empire, the relatively recent civilization who built the infamous Machu Picchu around 1405 AD. Tiahuanaco Bolivia is considerably more ancient with its first setting in the region way back in 200 BC – almost 1650 years older!

– The Empire of Tiahuanaco Bolivia

The Tiahuanaco were spread out through parts of Bolivia, Peru and northern Chile from approximately 1500 BCE to 1000 CE. Although their local language, Pukina, is no longer used, there are still descendants of this language group that exist today in the same area, and the language can still be heard with the Quechua and Spanish languages.

The Tiahuanaco site was originally populated as an agricultural village, due to the excellent climate with abundant rain which made it the perfect place for farming.  Tiahuanaco became the heart of the Tiahuanaco Empire around 200 CE as it grew in spiritual and administrative importance. The population hit around 70 000 people at the peak of the empire’s political power between 500-950 CE.

The collapse of the Tiahuanaco Empire started around 950 CE as a result of consequential climate changes. They suffered extreme drought and many people passed away which led to the city being abandoned by 1000 CE. Later, the Inca people populated the shores of Lake Titicaca and incorporated their own mythologies and philosophies, moving forward from the legacy of this powerful empire. It remains an important spiritual site for the Aymara people from Bolivia.

– 10 Places To Visit In Tiahuanaco, Bolivia: 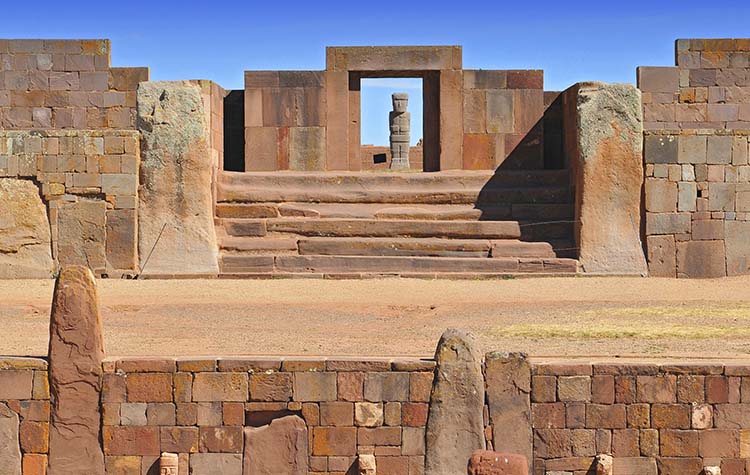 “Kalasasaya” or “stopped stones” is a temple located with a low platform mound of 120×130 meters. It has a large courtyard surrounded by high stone walls, and like the other platform mounds at Tiahuanaco it has a big staircase to the east that leads to a central sunken court.

The walls are constructed of sandstone pillars that alternate with smaller blocks of ashlar masonry. The most incredible quality of the Kalasasaya Temple is the tenon heads in different styles that trace along the outer walls. They may have represented many communities the Tiahuanaco empire colonized. It was described as an “almanac of carved stone” by the archeologist, Artur Posnansky. 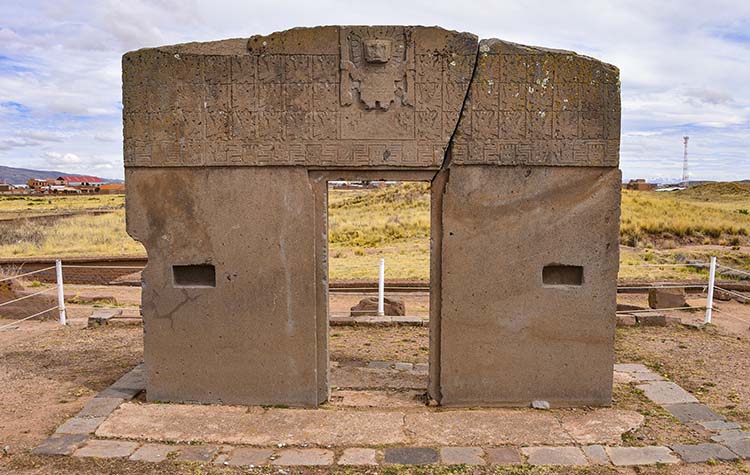 Located on the eastern side of the Tiahuanaco within the Temple of Kalasasaya’s courtyard, “The Gateway of the Sun” has petroglyphs of humans and animals which many researchers have interpreted as the solar-lunar calendar, similar to traditions of the Aymara and Inca Empires.

Puerta del Sol forms part of a much bigger annual calendar which includes a stone wall that consists of eleven pillars. These pillars track the sunset along the horizon throughout the year, the winter and summer solstices, and the spring and autumn equinoxes.

On the lowest line of imagery on the gateway there are carved symbols that indicate this astronomical passage of time throughout the year, and the symbols of the head of the condor located on the upper three lines indicate complete years. It is incredibly interesting and magnificent to witness.

Due to past looting and colonial destruction, Puerta del Sol stands in a different position with the Tiahuanaco. So, it is not in line with the pillars and wall, which means the calendar does not function as it used to. 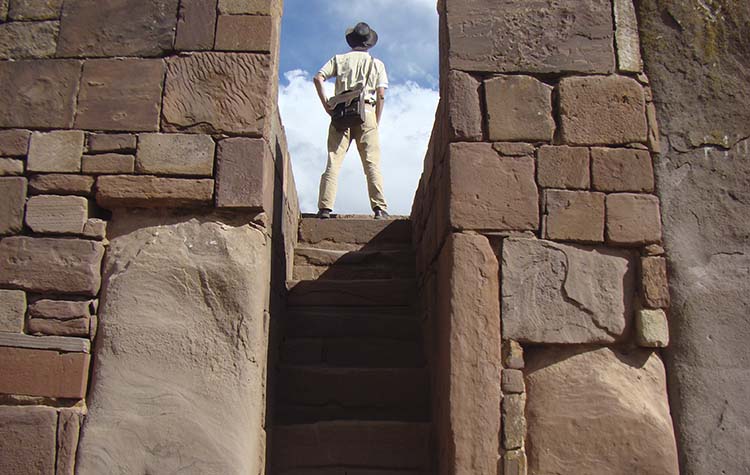 This pyramid is one of the biggest structures at Tiahuanaco at a length of 59 feet. It used to be an arrangement of small single homes, but then turned into large square compounds. Stones were just left here, in different stages of fabrication, scattered around the unfinished monument. Construction of the site ended around 950 CE.

In the 1900s the stones gathered by looting and destruction of local property from the Spanish colonization were used to build colonial churches and the railway. It may be sad that most of its original structure does not exist anymore, but one can still witness what is left from a mysterious, ancient civilization. 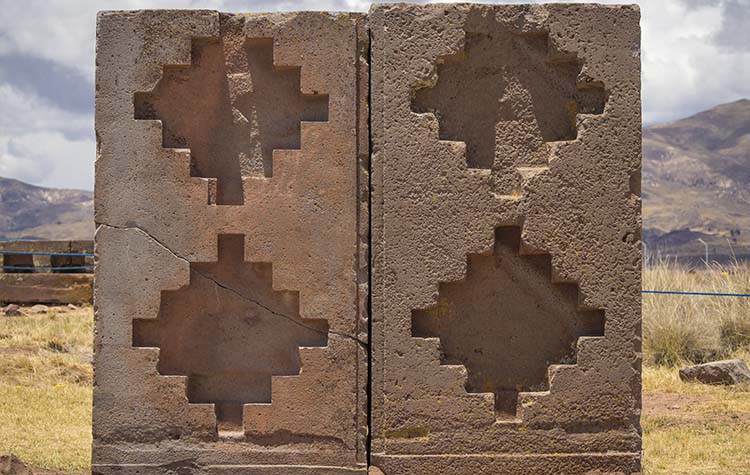 The meaning of this beautiful temple is “light of the dawn”. The Kantatalita Temple consists of carved relief monoliths in a spacious area. The huge, square sandstone blocks have a weight of approximately 20 000 kilograms. 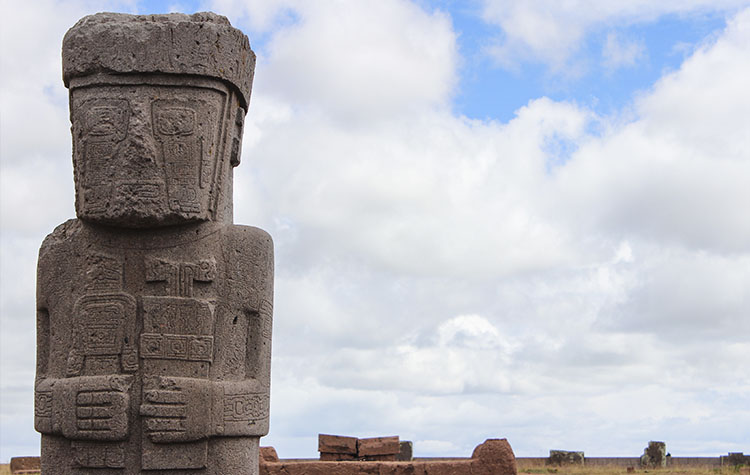 The Monolito Palace was named after the Bolivian archeologist, Carlos Ponce Sanguinés. It is a 3-meter-tall statue of a human figure, and some predict it is the image of a shaman who is holding two religious instruments.

The statue is holding the religious instruments in both his right and left hands, and its face is decorated with patterns. This is a very interesting structure and leaves room for much curiosity about the Tiahuanaco people.

The enclosure can be found near Putuni and the name means “fire stones” or “stones that burn”. The purpose of these carved pillars was to provide illumination by setting them alight.

This large structure measures up to 55×60 meters, and is surrounded by double walls which feature burial chambers. It was believed that the building was to preserve the remains of important people of the Tiahuanaco hierarchy.

The name “Putini” is the root of the Aymara word “Putuputuni”, which means “where the gaps are”. It has also been referred to as the “Palace of the Sarcophagi”. It is located to the west of the temple of Kalasaya. 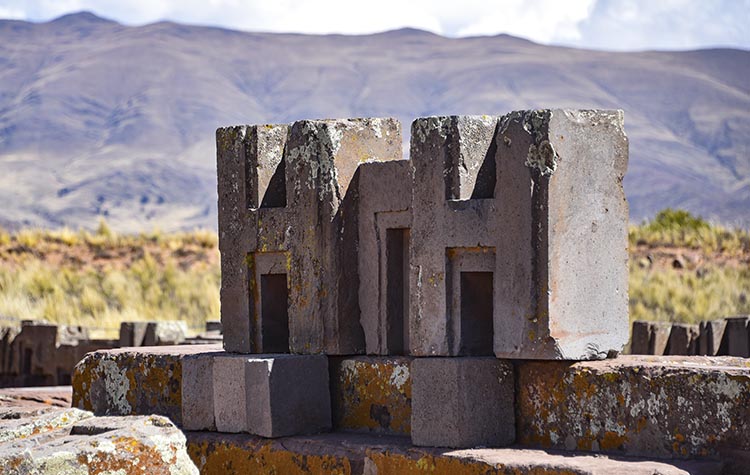 The name “Puma Punka” can be translated to “Door of the Puma” in Aymara. It is a big pyramid with a stepped platform mound which resembles a square with three levels of stone walls. It has also been referred to as the “Temple of the Moon” by Posnansky, and it was believed that it was used for rituals and ceremonies by the Tiahuanaco people.

The complex is made up of a terraced platform with an open courtyard to the west and an enclosed courtyard to the east. Apparently, it was beautifully decorated with polished metal plaques, and brightly colored ceramic and fabric. It seemed to have been a sacred space for the Tiahuanaco people.

If the 8 beautiful structures of the Tiahuanaco empire are not enough for your curious mind, then there are two museums that are located close to the town of Tiahuanaco. The museums give you the opportunity to see more detailed aspects, mainly reflected in their anthropomorphic vessels. There are also animal-shaped ceramics and kero vessels.

– Visit the wonders of Bolivia with Kuoda

Tiahuanaco is a playground of endless mystery, and it is definitely not lacking anything. There are amazing opportunities to explore this sacred land – and in a country as rich in diversity, culture and natural wonders – Bolivia should not be missed when traveling through Latin America.

Bolivia is the perfect location to experience luxury travel in Latin America.

We at Kuoda understand the frustrations that may appear when organizing a cohesive trip like this, especially with so much variety and limited travel time. We proudly share our strategies to create a well-planned itinerary for you, and all you have to do is relax and enjoy the ride.