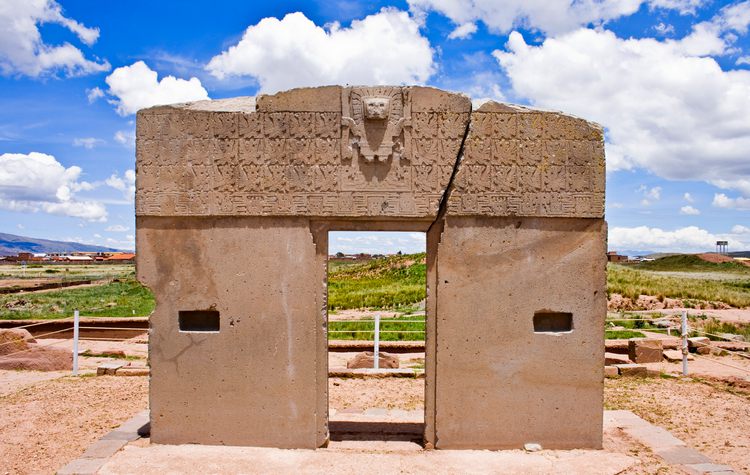 Puma Punku Bolivia, translated as “Gate of the Puma” in the Quechua language, is a 6th century archeological site with numerous ancient temples and forms part of Tiahuanaco (an ancient civic and sacred site with pyramids, gateways and monuments), in western Bolivia. It is world-known for its unusual precision of placement and cutting of stones.

Puma Punku Bolivia is thought to be built around the years following 500-600 CE. The ongoing building of the structures here indicate how the civilization grew and expanded as its people did, which reflects the increasing power that they built and rebuilt over hundreds of years.

Puma Punku Bolivia is a deeply mysterious site, and what this civilization left behind is so magnificent that when the Inca found its ruins 500 years later, they thought that it had to be the place where the gods had created the world.

Keep reading if you would like to learn more how you can explore the enigmatic stone blocks of Puma Punku and Tiahuanaco. 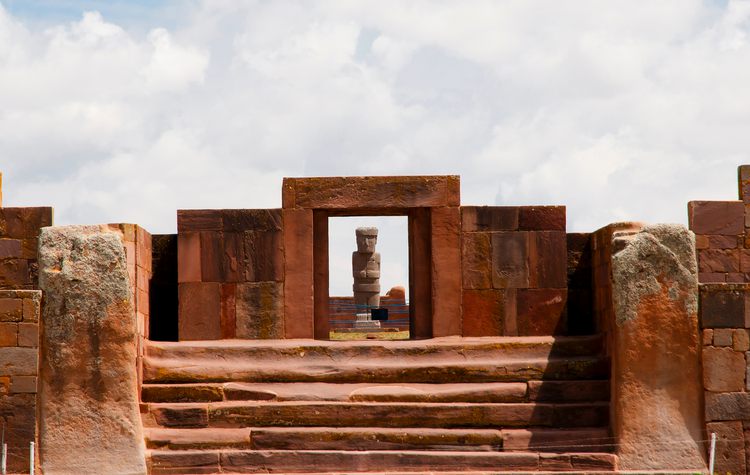 Also written “Tiwanaku”, Tiahuanaco is an ancient civic and sacred site with former pyramids and courtyards, gateways and monuments near the southeast shore of Lake Titicaca. It was the political and spiritual capital of the Tiahuanaco Empire between 200 and 1000 CE, and formed an important part of the spiritual traditions of Lake Titicaca.

Elements of these traditions can be seen in the sculptures and carvings on the structures at the site. Tiahuanaco is elevated at 3850 meters, and it has been studied and excavated since the 17th century. Unfortunately, it has suffered some destruction from colonial and industrial invasion.

Tiahuanaco has been designated a UNESCO World Heritage Site, and it is a national museum of political importance today. It is also very significant as a cultural and religious site for the indigenous Aymara people of Bolivia.

The Stone Blocks of “The Door of the Puma 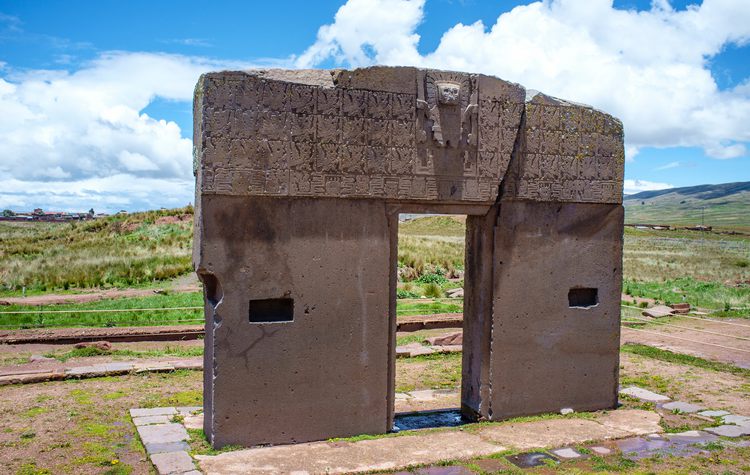 The stone blocks at Puma boast many interesting facts that are unexplained and mysterious to the viewers who travel here. The stones have been carved with precision which one would not expect from primitive civilizations. Each stone in the walls has been cut perfectly, and almost seems as if some sort of sorcery was involved.

The stones are of megalithic proportion, and the largest stone weighs around 130 tonnes. It has been determined by chemical analysis that these large stones, mainly consisting of red sandstone, have been transported up a steep incline from a quarry near Lake Titicaca, almost ten kilometers away from the lake.

The most fascinating and curious thing is the manner that andesite was used to construct the temple. For facings and carvings, smaller andesite stones were used. Archeologists believe that these andesite carvings were used to represent a pan-Andean deity, the Incan god of creation, Viracocha. 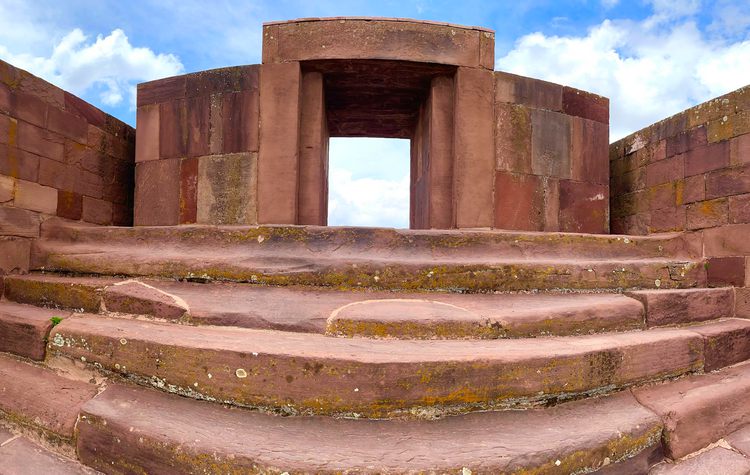 With the time, one thousand years of wind and rain – as well as the destruction caused by colonization, the site has slightly deteriorated and most of the temple complex is entirely gone.  Some parts have been carried away by looters and stone miners in the past.

Unfortunately, many of the site’s rare metal ornaments, jewelry and colorful potsherds have been taken by treasure hunters in the past. Even though it has been stripped of most of its tangible elements, what is still there still proves that the temple the Tiahuanaco knew during the height of their empire was incredibly sacred.

Puma Puka with its intricately carved blocks used to be bigger than two football fields laid side to side. The complex boasted a central promenade and wide courtyards to the east and west that were paved with stone so big that alien intervention has been suspected. 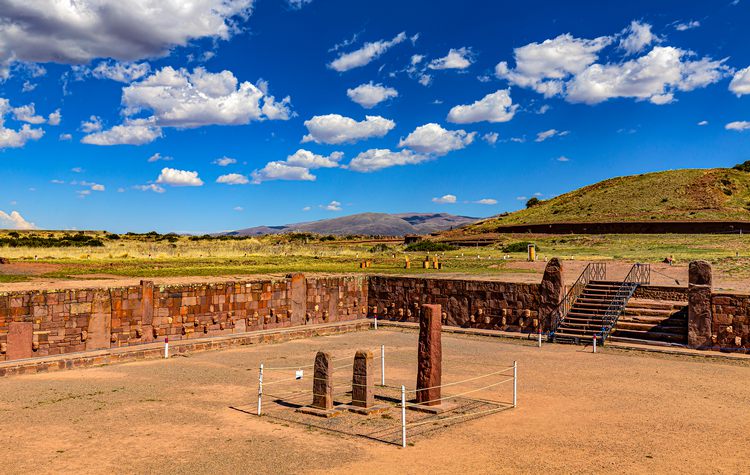 The Puma Pucka inhabitants worshiped many gods, most of which served in the agricultural sector, and a creator god who drew the Tiahuanaco people from the rocks. His image was carved onto the Gateway of the Sun, a massive stone arch which was part of Puma Punku before it was relocated to nearby Kalasasaya.

Human sacrifice was practiced, dismembering the chosen victims as part of a ritual offering to their gods. There is some evidence though that those who suffered this fate were not native Tiahuanaco but outsiders from battle in captivity. Stone carvings illustrate the Tiahuanaco warriors collected trophy skulls which supports this belief.

According to archeologists, the stone carvings also depict the preservation of ancestors through mummification. There is some evidence of bones with cuts and scratch marks that suggest de-fleshing that may have been a practice of the burial places in the Tiahuanaco culture. Everything about this place is mysterious to say the least, which leaves room for speculation and different conspiracies. 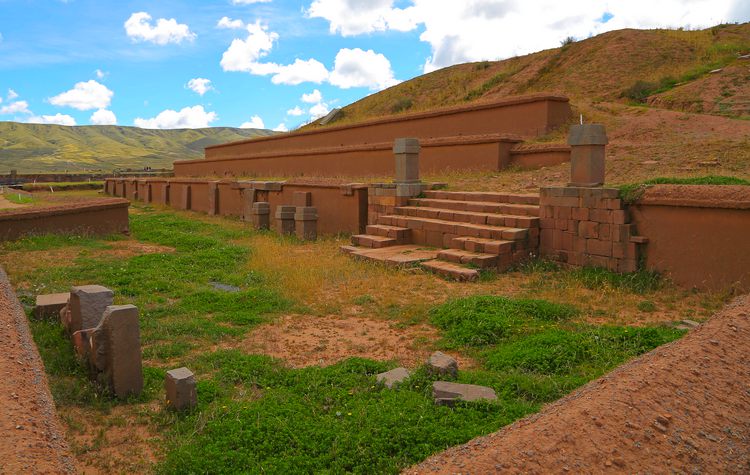 The sacred site Tiahuanaco consists of nine excavated structures and a contemporary museum that shares the history of the Tiahuanaco people, the spiritual beliefs and traditions, archaeological efforts, and the importance of the sites to Bolivian locals.

The Akapana pyramid is one of the biggest structures, and stands at 59 feet tall. The Kantatallita temple means “exposed to the dawn”, or “light of the dawn” and consists of carved relief monoliths in a large open area. The Monolito Ponce is a statue of a human figure of about 3 meters in length.

Putuni is a big, rectangular enclosure surrounded by double walls with burial chambers. Not far away you will find Kerikala which means “fire stones”. It consists of carved pillars that set alight and provided illumination. And then of course there is Puma Punku, or “Door of the Puma”.

Explore The Tiahuanaco Mysteries With Kuoda 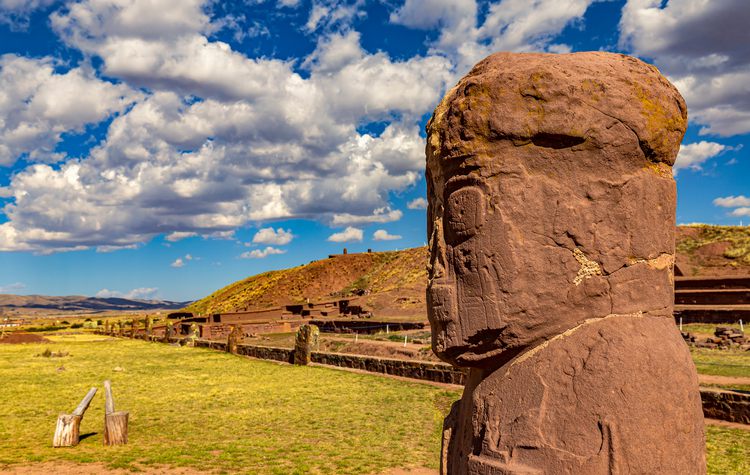 Bolivia is one of South America’s top travel destinations, with good reason. It offers so much diversity, and a rich combination of unique cultures and traditions. This combination gives this beautiful country its authentic charm, and we highly recommend getting yourself here sooner than later.

Bolivia offers something for everyone, whether you are a nature lover, a city wanderer, a spiritual seeker or a history nerd. La Paz, Sucre and Potosi are three cities with cobblestone streets that bring back memories of Bolivia’s worst and best times.

We at Kuoda understand the frustrations that may appear when organizing a cohesive trip like this, especially with so much variety and limited travel time. We take pride in our passion for creating customized luxury tours in Bolivia with the aim to provide you and your family the best experiences possible during your trip.