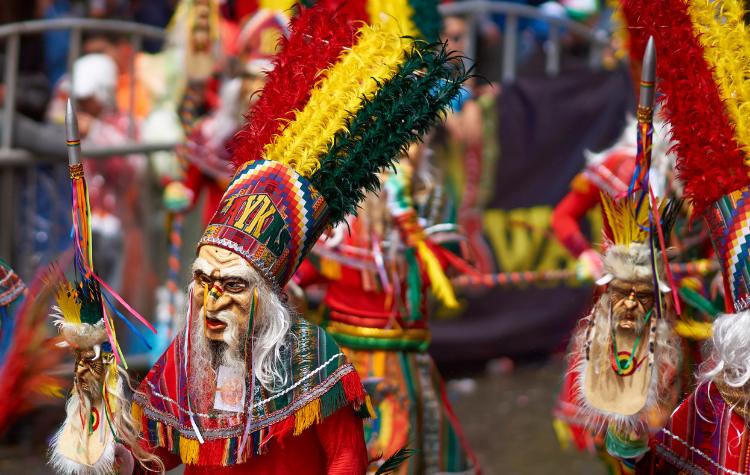 Extraordinary experiences are what we aim to deliver every trip you take with Kuoda, but sometimes – we get a little bit of help making it extra magical when you plan your trip around one of the hundreds of cultural events that take place in South America, every year. Experience folklore, indigenous costumes, vibrant music, delicious food, and quirky traditions, in one of South America’s hundreds of festivals next year. Better yet, let Kuoda plan a luxury vacation to  South America, making sure you experience the festival culture while also seeing other parts of the country on your once-in-a-lifetime trip.

We’re ready to plan your bucket list trip to South America! Get inspired by learning about some of our favorite events happening next year and reach out to us today to have one of our travel curators start creating your dream trip. 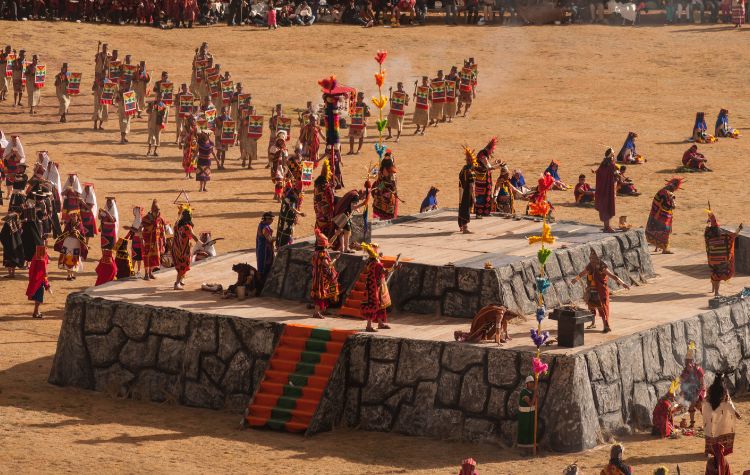 Every June 24, the Sun God is the protagonist of one of Peru’s most important and traditional festivities: The Inti Raymi or “Sun Festival”. During this date, thousands of national and foreign tourists walk the streets of the historic center of Cusco and congregate on the esplanades of its main sites to experience a special day of cultural activities whose purpose is to revalue the Inca legacy and celebrate the Incan New Year.

There are more than 800 people, including actors, dancers, and musicians who – dressed in typical clothing – star in a series of scenes that include dances, performances, and praises performed outside the Main Square of the city. On March 3, 2001, the Inti Raymi was declared a Cultural Patrimony of the Nation. Its organization and production are now in charge of the Municipal Company of Celebrations of Cusco (EMUFEC). 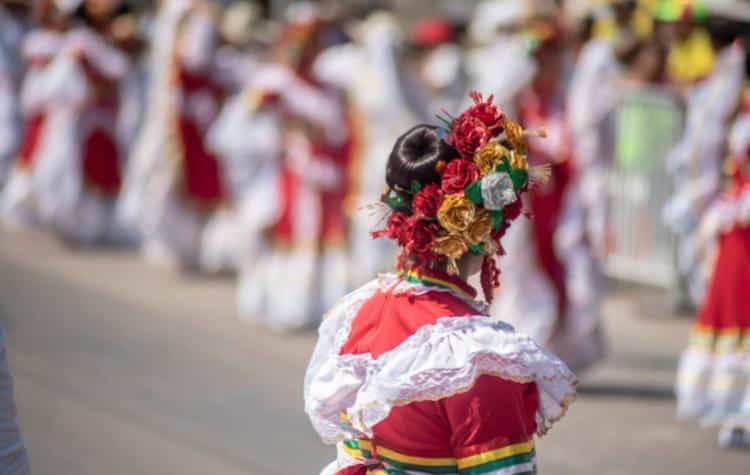 Barranquilla is a city built on a foundation of African, Indigenous, European, and Middle-Eastern cultures, and is a real cultural and musical melting pot of South America. The sensational carnival in Barranquilla is the second largest carnival party in the world, second only to Rio De Janeiro in Brazil. Though smaller in size than Rio, Barranquilla offers plenty for those looking to enjoy a party. Wonderfully elaborate costumes, delicious food, and various styles of Caribbean-Colombian music like cumbia are found throughout the city during this time. The parade is the most important part of the carnival and you shouldn’t miss this if you are going to carnivals in Barranquilla.

Three days in a row there is a huge parade through the city. Expect an explosion of color with hundreds of folk groups in their dazzling costumes, international artists and live bands, loud Latin American music, the throwing of cornflour, and of course lots of rum and aguardiente or “firewater” at this must-see fiesta. In 2023, the celebration will take place February 18-21, and makes for a great addition to your luxury Colombia vacation. 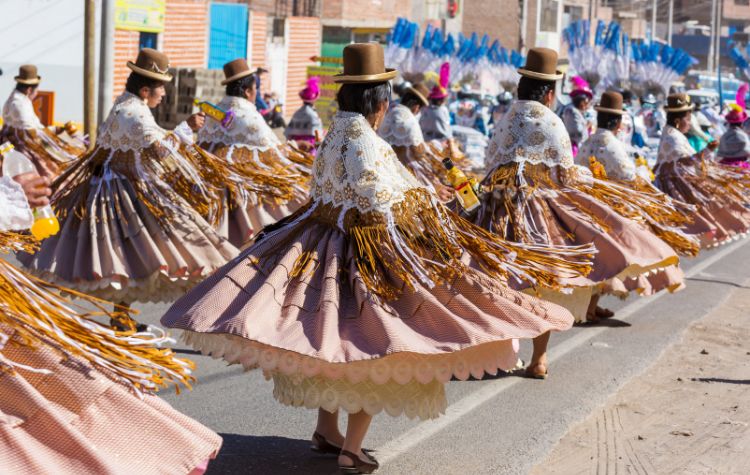 In early February, between the 2nd and 12th, this two-week holiday is filled with a unique religious procession, accompanied by folk dances in which participants drink beer on every step, colorful and spooky costumes, and an incredible amount of alcohol. It is believed that during the great rebellion of Túpac Amaru in 1781, the Virgin protected the Spanish inhabitants of Puno from the Incas besiegers.

The celebrations start even before the festival begins, with preparations kicking off on January 24th, including masses and liturgical ceremonies setting the spiritual stage. February 1st, the day before the Big Day, K’apos (people with llamas, burros, and firewood) and candles – which are meant to be burned at the Virgin’s shrine – enter the city.

February 2nd is the main day of the Candelaria celebration, which includes masses, dances, and a procession of the Virgen de la Candelaria, accompanied by the faithful, dancers, and the music of the sikuri, the specific style of panpipe and music that you will find in the altiplano. During this festival, there are hundreds of musicians and dancers showing their folkloric dances and impressively colored outfits. 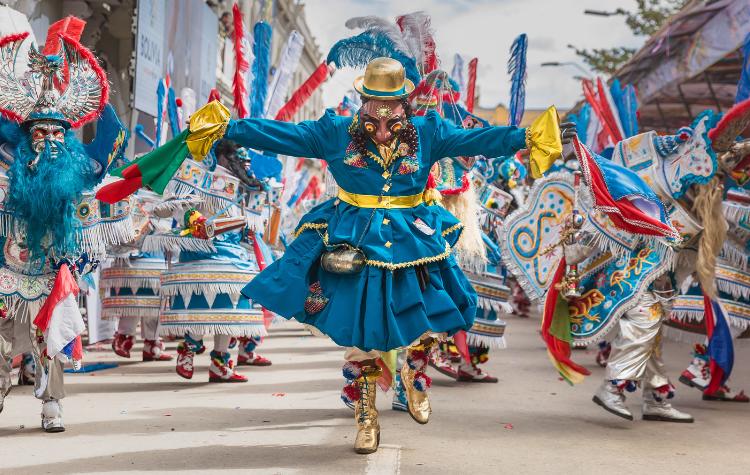 The Carnival of Oruro in Bolivia was inscribed on UNESCO’s Representative List of the Intangible Cultural Heritage of Humanity. Every year, for six days, this carnival gives rise to the display of a whole range of folk arts in the form of masks, weavings, and embroidery.

More than 28,000 dancers and 10,000 musicians take part in the parade. In 2021, the carnival was not celebrated and many dancers passed away from Covid-19. However, its bearers continue to struggle to maintain the festival that stirs the local economy, but, above all, energizes and spreads the local worldview through syncretism and a strong sense of belonging and collectivity, embodied in the necessary interaction between artisans, dancers, musicians, and others. 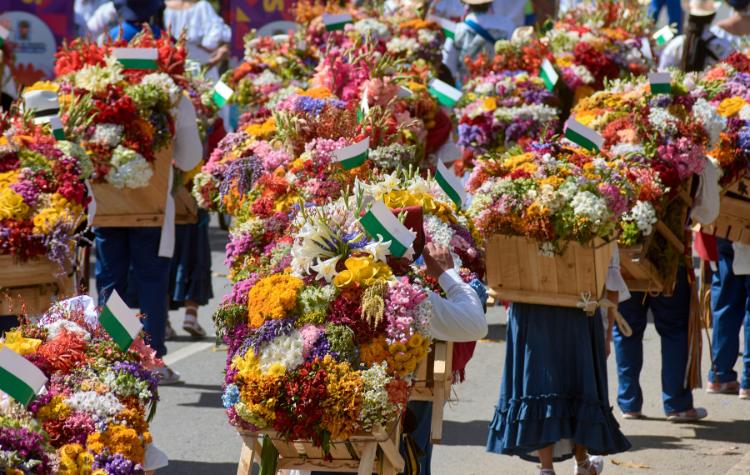 Every year in late July and early August, the streets and parks of Medellín erupt in a multi-day celebration of flowers. With events like a city-crossing convoy of festively decorated chiva buses, a procession of close to 7,000 horses, and a children’s parade, the Feria de las Flores presents a showcase of Medellín, a city of resilience, hospitality, and charm. People flock to the city from all over the world, which makes the event a significant driver of tourism and Medellín’s international acclaim.

An important part of Antioquia’s culture for more than 50 years, the festival traces its beginnings to Santa Elena, a small mountain town 45 minutes east of Medellín. The sunbathed fields surrounding Santa Elena make up the traditional home of Antioquia’s flower industry. Flower vendors in the area, known as silleteros—a name derived from the wooden seats (silletas) that were used to manually transport people in a distant colonial past— have long been renowned for their artistry and for the quality and variety of their flowers.

In 1957, the silleteros of Santa Elena received an invitation from a member of Medellín’s tourist bureau to display their wares in the city. About 40 silleteros made the trip that year and locals received them with such exuberance that the display became an annual event.

The next Feria de Las Flores, Flower Fair, will be from July 28 – August 7, 2023, with the Silleteros Parade taking place on Monday, August 7. 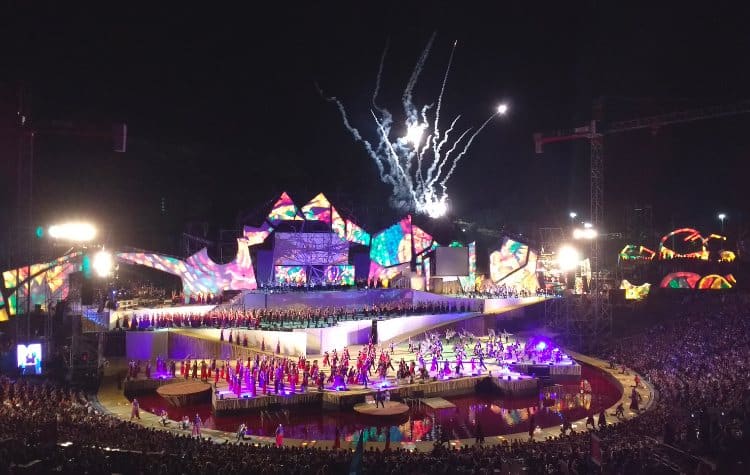 The wine festival or “Vendimia,” is a time of celebration for the harvest of the area’s unique grape, the Malbec, which is used to make the savory Malbec wine, a red variety with a robust, yet fruity taste. Fiesta de la Vendimia events begin in January and February throughout the province and culminate in March when 40,000 visitors come to celebrate and enjoy the local nectar, awakening the normally sleepy northern city.

The city’s fountains spew out wine-colored water and the city is electric with the jubilance that delicious wine brings, with a party spirit still spilling over from Argentina’s Carnival celebrations.

During Vendimia, the city morphs into a crowded hubbub of parades and street fairs where the wine is plentiful and the province’s capital bulges with pride.

Each region in the Mendoza province is represented in the festivities and selects a princess to compete for the harvest queen (la Reina de Vendimia). Argentina is known to have beautiful women and the princesses are no exception. The chosen beauties ride atop lavish floats from each region in a Friday and Saturday parade that travels through the city’s downtown area. 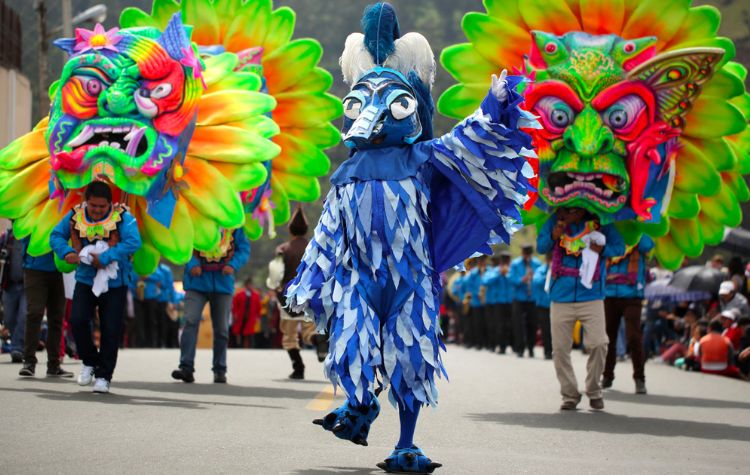 You may not have heard of Guaranda in Ecuador yet but if you’re looking for a place to celebrate carnival – we know just the place. This small city with views of the famous Chimborazo Volcano pulls out the stops with several parades taking place on the long holiday weekend. The carnivals of Guaranda are celebrated with baldas, poems, and parades considered one of the best in Ecuador. Likewise, the carnivals have a deep focus on serenatas and songs. In fact, the town has typical carnival songs.

During the festivities, the traditions and culture of the locals and their ancestors are highlighted, which is why parade participants often wear indigenous clothing. Be prepared to get sprayed with foam or water while walking down the street, or even brightly colored flour or talcum powder – it’s all part of the carnival experience in Ecuador!