Empanadas with a Bolivian Twist 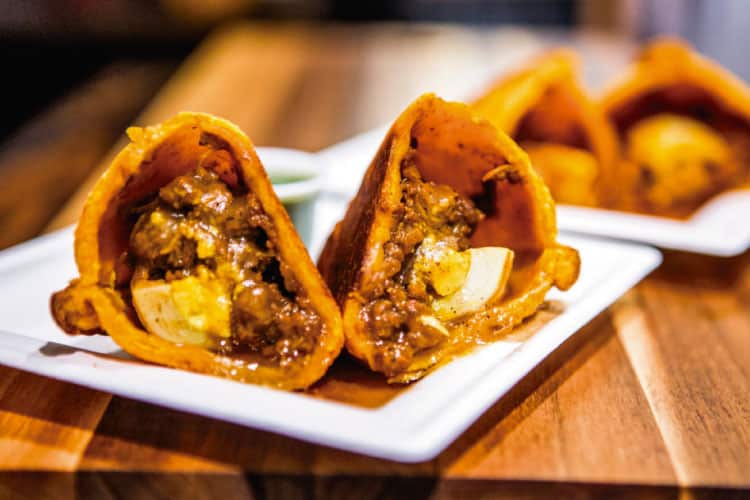 Travelers who have already ventured to Peru can most likely vouch for the country’s impressive culinary prowess, but what of Peru’s immediate neighbor to the south? Bolivian cuisine, although yet to capture international attention, is equally rich in history, flavor, and tradition. Many popular Bolivian dishes share a number of ingredients and history with other South American foods, a great example being the ubiquitous empanada. Two uniquely Bolivian empanadas worth tasting at least once during your personalized trip to Bolivia are the salteña and the llaucha!

This hearty empanada can either complete a classic Bolivian breakfast, or serve as the perfect midday snack. Traditionally made with slightly sweet pastry and savory filling of minced meat or chicken, olives, peppers, onions, raisins, egg, potatoes, peas, carrots, and plenty of gravy, the salteña doesn’t disappoint.

Not unlike other quintessential foods across the world, salteñas are the result of cultural exchange, and in this case between Argentina and Bolivia. In true folklore fashion, there are a couple different versions of the salteña origin story, but one of the most widely accepted versions credits Salta-born feminist and journalist Juana Manuela Gorriti, who was exiled to Bolivia with her family in 1831. The tale mentions how local children in particular went crazy for her empanadas, and would flock to the “salteña” (woman from Salta) for her special recipe. The rest, as they say, is (Bolivian) history.

Nowadays, Bolivians across the country pride themselves in taking on this potentially messy pastry, while never spilling a drop of precious gravy inside. As soon as you taste the unmistakable hints of cumin and oregano married with the other carefully chosen ingredients, you might also feel compelled to take special care not wasting a single morsel. 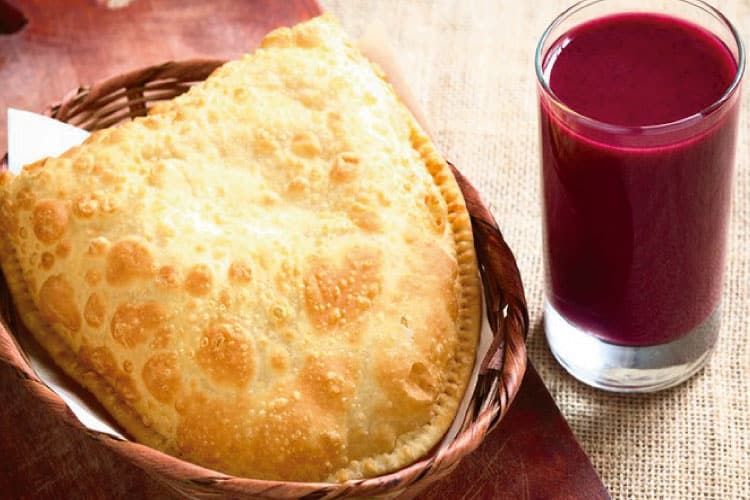 Simply put, llauchas are cheese empanadas (from the original Aymara llauch’itas, which means the bringing together of bread and cheese). However what makes them particularly coveted in the city of La Paz, are the authentic family recipes that have been passed down for generations. One such baker who works to protect the llaucha’s integrity is Doña Petrona, who has not changed her recipe for forty years. You could say that she sells a bit of nostalgia along with her llauchas in the San Pedro district of La Paz.

What makes the traditional llaucha of La Paz is the molten cheese and broth filling, along with the painted aji amarillo (yellow chili pepper) dough that gives the empanada a golden hue as it slides off the bread stone, and out of the woodfired oven. Some bakers will also add ulupica (a type of hot pepper found in the Andean regions of Bolivia and Peru) directly to the filling, giving it an extra bite, while others offer a spicy sauce on the side.

Another traditional Bolivian breakfast pairs the llaucha with a Bolivian beverage called api. Api bears a strong resemblance to Peru’s popular chicha morada, as it is also made with Andean maiz morado (purple corn), cinnamon, clove, and orange rind. However, what sets api apart is the fact that it is made from purple corn flour (not by boiling the cob itself) giving it a thick consistency, and is served steaming hot to combat the high altitude chill of the Bolivian Altiplano.

While the salteña is one of the most representative foods throughout Bolivia, and the llaucha offers a slice of traditional paceño (from La Paz) cuisine, both empanadas are sure to delight your taste buds during your trip to Bolivia with Kuoda.