All You Need to Know About Easter Island 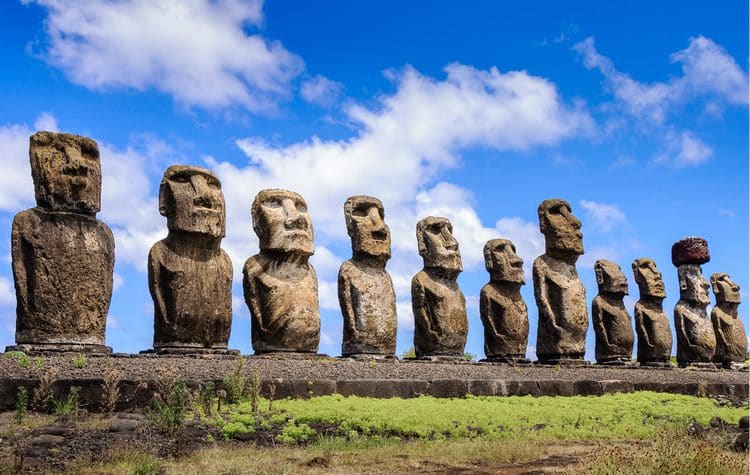 Easter Island is one of the world’s most remote inhabited islands. Since the 1960’s, though, the Island has opened up to an increasing number of tourists excited to explore its infamous monolithic statues and experience the breathtaking scenic landscapes in which they sit.

But Easter Island has a whole lot more to offer than Instagram-worthy photos of these ancient figures. Here you’ll find great seafood, spectacular beaches, and opportunities to get outdoors and take in a culture that’s unique to this small corner of the world.

For those that are willing to make the trip to this remote destination, the history, culture, outdoors, and modern touches of Easter Island are sure to live up to their growing reputation. If it’s a place you’re thinking of visiting, let this guide inspire you to start planning your trip.

Where Is Easter Island? 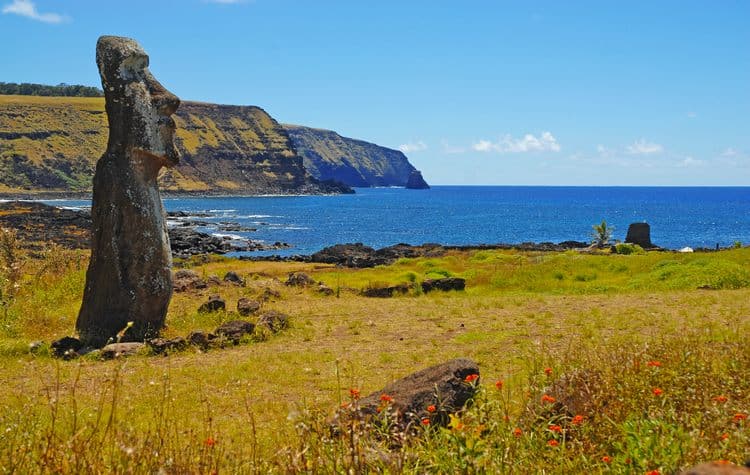 About 64 square miles large and shaped like a triangle, Easter Island was formed by a series of volcanic eruptions. It’s this beginning that produced the dramatic and striking landscapes we see across the Island today.

Called Rapa Nui by the original inhabitants, the name Easter Island was first used in 1722, when Dutch explorers landed on its shores on Easter Day. In the late 19th century, the Island was annexed by Chile, of which it still remains a special territory.

The History of Easter Island 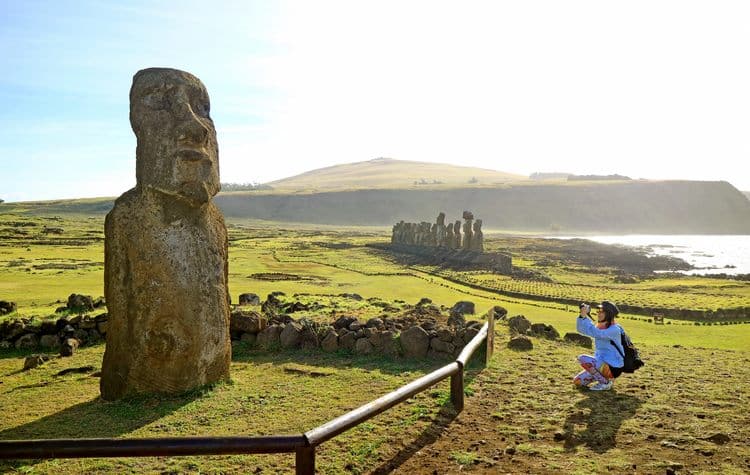 In local tradition, the story goes that the first king of Rapa Nui was Hoto-Matua, who ruled a subgroup of Polynesians. He and his organized party of emigrants arrived on Anakena beach between 400 and 800 AD, after traveling thousands of miles by ship.

It was the descendants of Hoto-Matua and his party that settled the island. They formed a distinct and rich culture, capable of creating and transporting the giant stone statues that the Island has become famous for.

Jacob Roggeveen was the first European explorer to land here and is responsible for naming the Island. Easter Island officially became a part of Chile in 1888, and it remained an isolated outpost until the 1960’s, when the Chilean government appointed a civilian governor and they began to develop the site for tourism.

Easter Island Today: What to See and Do

Of course, we’re going to tell you more about the infamous Easter Island statues and why they’re worth a visit in and of themselves. But we’re also shedding some light on the lesser-known perks of a luxury vacation to Easter Island and what Kuoda can offer to make this the vacation of a lifetime. 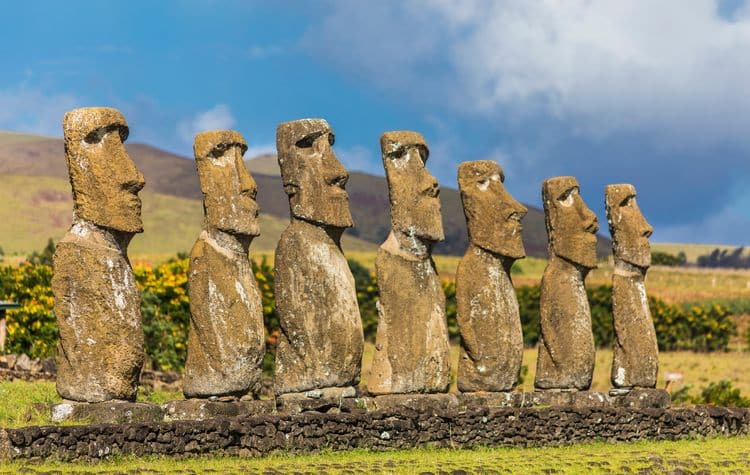 There remain almost 900 Easter Island heads. Averaging a size of 13 feet high and a weight of 13 tons, the moai were carved from volcanic rock and are scattered at various points throughout Easter Island.

These stone busts have been placed on top of ceremonial stone platforms, known as ahus. Their style is distinctive among Polynesian cultures, and they’re masterfully crafted and engineered.

Perhaps the most famous site for the enormous Easter Island heads is Ahu Tongariki. This is a long row of 15 restored statues sitting atop the largest ahu on the island, and it’s the best place to get the iconic photos you’re looking for. 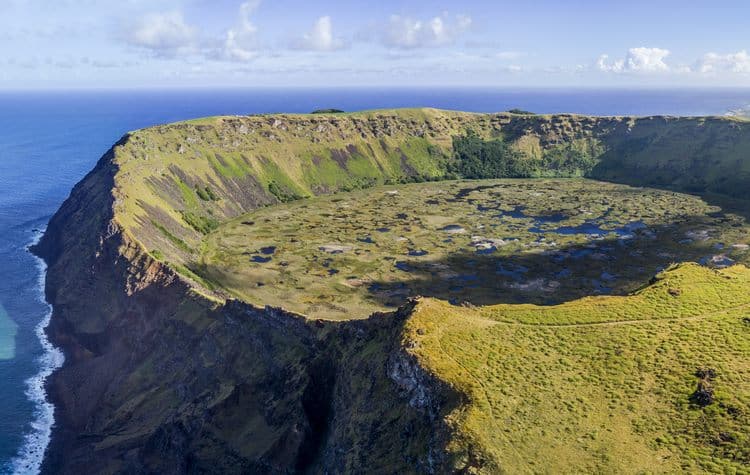 The largest volcano on Easter Island is Rano Kao, and it’s a must-see on any trip here. A 20 minute drive from Hanga Rao, the Rano Kau crater offers beautiful views of the city below perched against a backdrop of the Pacific Ocean.

But Rano Kau is also where you’ll find a moai quarry that’s as eerie as it is stunning. This crater is where the Easter Island heads were carved before they were transported to their long-term residence on other parts of the Island. But some of the moai never made it to their places atop ahus, and about 400 partially finished heads were abandoned where they remain to this day. 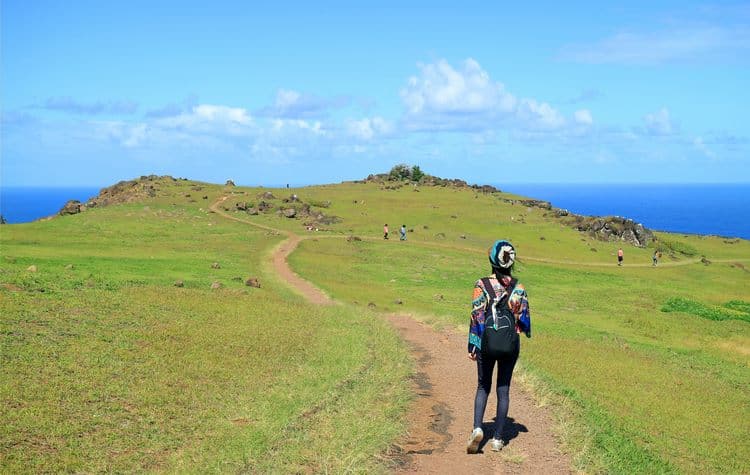 From Rano Kao, you can follow the moai path, which is a network of ancient roads that were used to transport the statues from the quarry to their ultimate destinations. The barely marked path takes only an hour or so to complete, but the scenic grassy route will reveal some of the most incredible vistas the Island has to offer.

Hiking and opportunities for getting outdoors don’t stop there, though. Approximately 7,000 hectares of the total 16,628 hectares of the Island are protected within the borders of Rapa Nui National Park. Guided hikes can take you to some of the most famed archaeological sites, where you’ll quickly see why this park was named a UNESCO World Heritage Site in 1995. 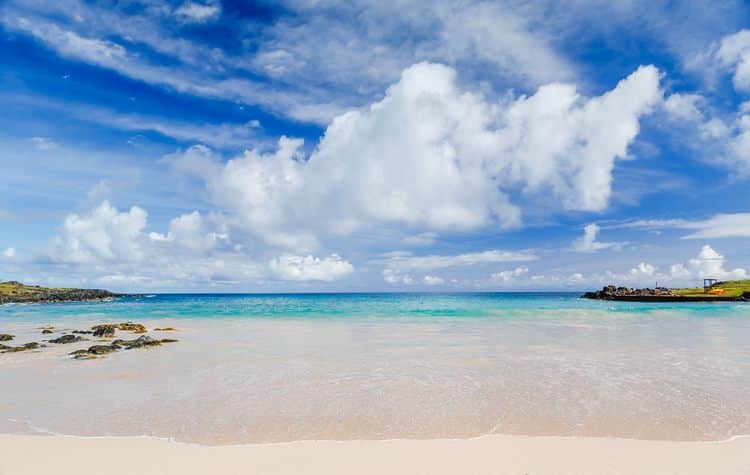 The beaches on Easter Island are more than coral white sand and turquoise waters. Yes, the warm and beautiful summer months make these beaches the perfect place to spend a relaxed afternoon or a romantic sunset, but the Island’s most popular beach, Anakena, has some historical significance you’ll want to discover, too.

Anakena is the home of Ahu Ature Huki as well as Ahu Nau Nau. Both archeological sites, the former is a stone platform housing one moai and the latter is a similar stone platform with seven moai still standing on it. Combined with the oceanic paradise background, these might be some of the most gorgeous sites on the Island. 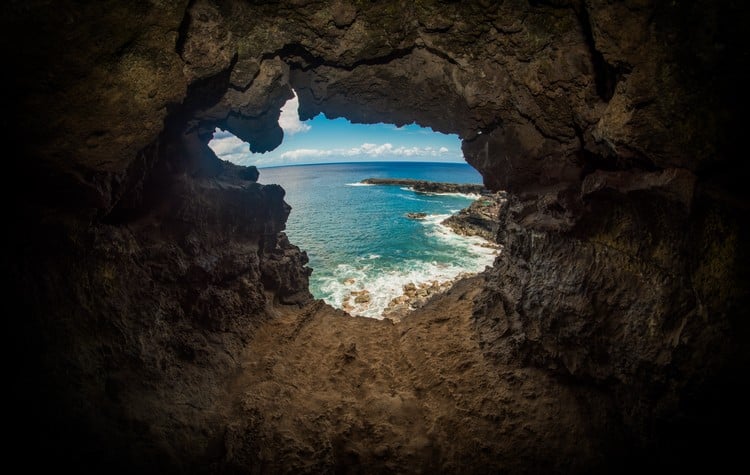 You’re probably not visiting Easter Island for its culinary reputation. Nonetheless, the Island is located in the middle of the Pacific Ocean, which means access to the freshest seafood you can find.

While any small restaurant will have fresh seafood on the menu, usually accompanied by beans and yams, there are some gourmet experiences to be had. One of our favorites is Perava in Hangaroa’s Eco Village, which serves world-class seafood plates alongside local specialties that change based on the availability of local ingredients. 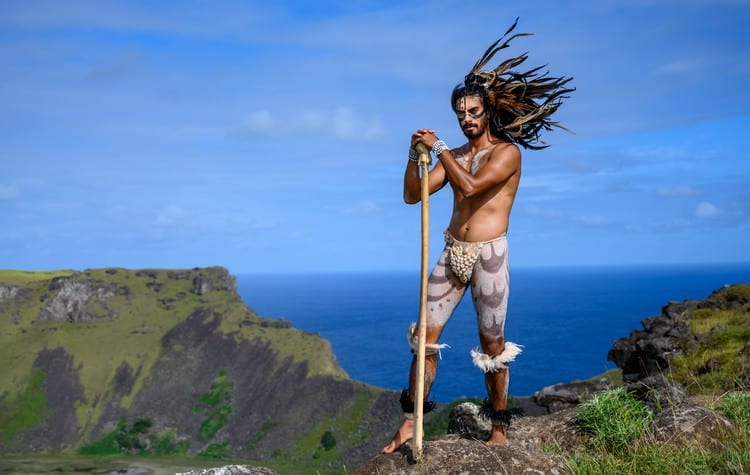 The indigenous people of Easter Island are called the Rapa Nui. About 60% of the people living on the island today are direct descendants of the original settlers of the island, and they maintain a great deal of their cultural traditions.

Among the best ways to experience these traditions is to attend the Tapati Rapa Nui celebration that takes place every year in February. Filled with competitions and games that date back hundreds of years, the festival is an important means of preserving and celebrating the sacred culture of the Island. 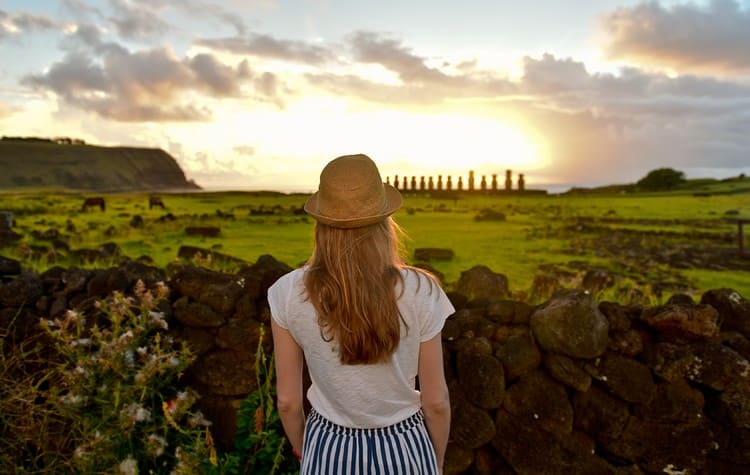 The climate of Easter Island is subtropical, meaning that it’s sunny and dry throughout most of the year. For the warmest weather, visit between January and April or October through December. Cooler temperatures roll in around May and June, bringing rainfall between June and July.

Getting to Easter Island isn’t as difficult as it once was. From Santiago, the capital of Chile, you can take a 5 hour LATAM flight directly to the island. You’ll land in Hanga Roa, where the majority of our accommodations are located.

The busiest month for tourism is February, because of the Tapati Rapa Nui festival. But keep in mind that this destination now receives an average of 100,000 tourists annually, so making a trip here takes careful thought and planning in order to secure the best accommodations and a spot on the most exclusive tours. 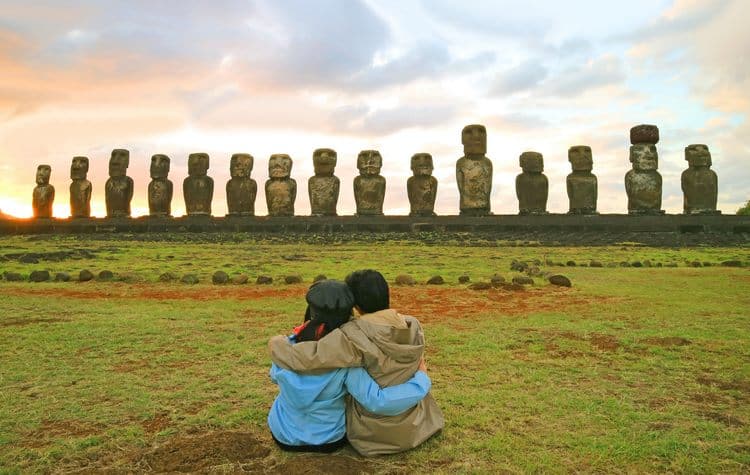 Easter Island is famed for its enormous stone busts known as moai’s. The Easter Island heads decorate the whole of the island and serve as a reminder of the rich and developed culture of the original Polynesian residents.

But, aside from its historical significance, Easter Island offers visitors great beaches and excellent opportunities for getting outdoors, delicious seafood, and a unique culture that doesn’t exist anywhere else in the world.

For a truly distinct experience, Easter Island is a one-of-a-kind destination. Start customizing your trip here with Kuoda today.