Travelers often look to Colombia for the pristine beaches that line the Colombian Caribbean or the vibrant social scenes found in the country’s vast, metropolitan cities – but often overlooked in a country so geographically and culturally diverse, are the vibrant colonial towns in Colombia that merge together Spanish colonial architecture and a rich history and culture. Colombia is full of these towns, many of which are deemed by the Colombian tourism ministry as Pueblos Patrimonios (Heritage Towns), or UNESCO World Heritage sites – not to be missed; these towns add architecture, local charm and rich history to your luxury Colombia itinerary.

While there are dozens of towns worth paying a visit to in Colombia, we’ve put together a list of a few that you’re not going to want to miss on your luxury Colombia itinerary. Looking for something a little more personalized? Use this list as a guide for inspiration and contact us to curate the perfect Colombian itinerary for your visit. 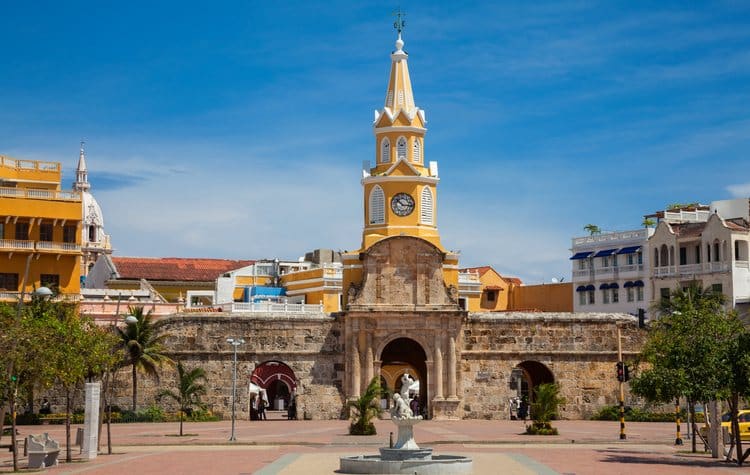 Undeniably one of the most popular destinations in Colombia, Cartagena in recent years has transformed into a hub for tourism to the region. Cartagena is the crown jewel of the Spanish-Caribbean and brings together superbly preserved colonial architecture, cobblestone alleys and world-class bars and restaurants – but with the lackadaisical vibe of the Caribbean which will force you to take things slow, enjoy the moment and truly relax – you’re in the tropics after all.

The historic center of Cartagena is found within the old city walls built by the Spanish between the 16th and 18th centuries. Known as Ciudad Amurallada, or the Walled City, it’s where the majority of hotels and restaurants are located.

Situated just a few hours’ drive from Medellin lies the tranquil yet colorful town of Guatape. This picturesque pueblo is known for its colorful houses and hand-made tiles called zocalos.

Beyond the colorful architecture, travelers would be amiss to come to Guatape without taking in the views at the top Piedra del Peñol though the climb is 700+ steps, the views of the surrounding lake and sprawl amidst a vast expanse of green mountains. 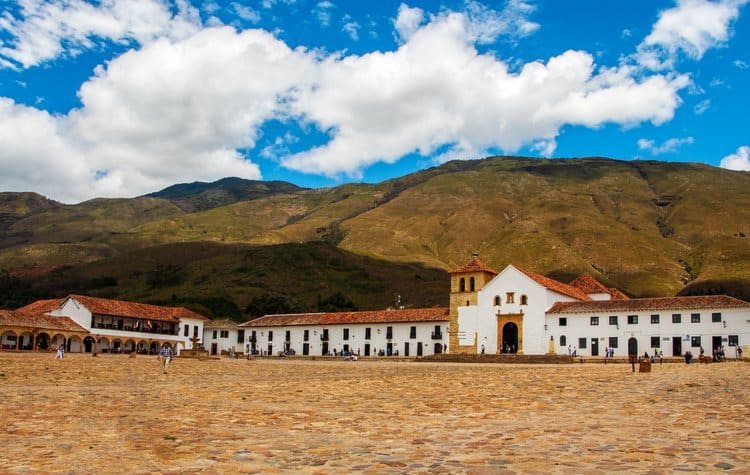 One of the most well-kept Colombian secrets is the colonial city of Ville De Leyva, which has been a long-standing popular weekend destination with Bogota natives, with its proximity to Colombia’s capital. With picturesque postcard views, cobblestone streets and colonial charm that will transport you centuries back to a simpler time, this town is a charming break from city life. For those looking for a traditional taste of Colombia, from the food to the architecture and the old town square – Plaza Mayor – which is the largest old town square in South America – this 16th century city gives travelers a taste into the traditions, architecture and life in colonial Colombia. Around the area, travelers can head out of the town to hike or cycle through the forests of Iguaque National Park. There is also an El Fosil museum, which houses pre-colonial artifacts including fossils found in the area, such as a 120-million-year-old skeleton of a dinosaur. 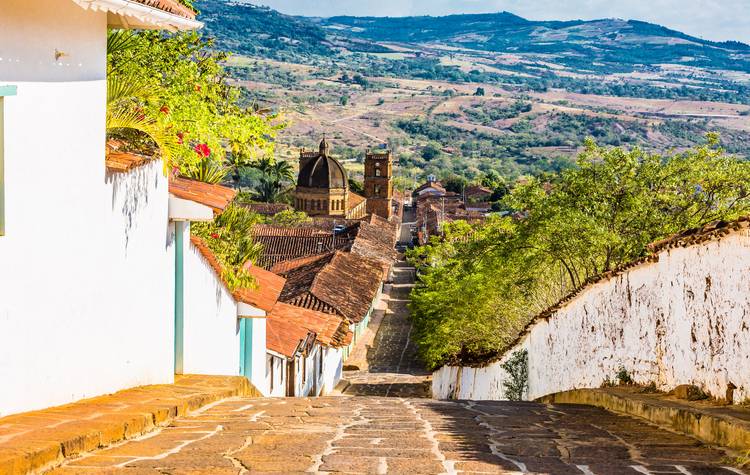 Famously known within Colombia as “the prettiest town in Colombia” the charming pueblo for Barichara lives up to its high praises. Its cobblestone streets, whitewashed walls and red-tiled roof are an architecture lover’s paradise. Barichara is filled with charming storefronts, local artisans, colonial churches and even a two-hour hike from Barichara to Guane which offers panoramic mountain and picturesque village views. 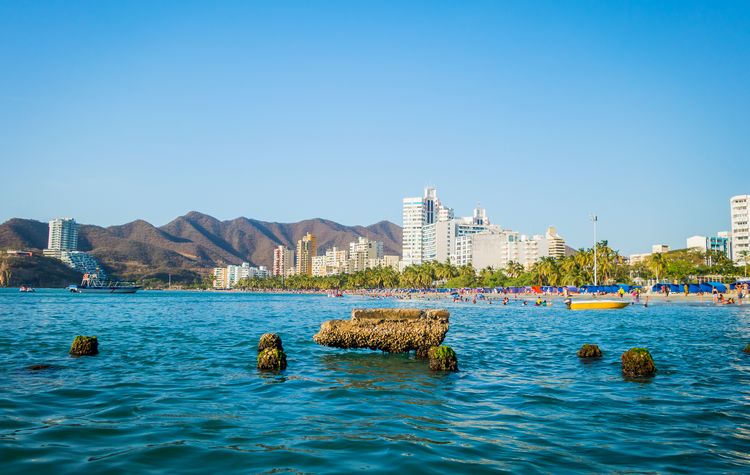 Beachside Santa Marta is an established port city on the Caribbean coast that blends together indigenous, Spanish and African cultures to create one of Colombia’s most interesting cities.

The city was established in 1525 by the Spanish and is one of the oldest cities in the Americas, seen in the old cobblestone streets and architecture, which to this day has been well preserved in most areas of the city. Within Santa Marta travelers can find local markets, whitewashed cathedrals, and endless opportunities to explore the nature such as the Caribbean’s best beaches, hiking trails and the famous Tayrona National Park nearby – a Colombian gem which is teeming with wildlife, gorgeous beaches and some of the best opportunities for adventure on the Colombian coast. 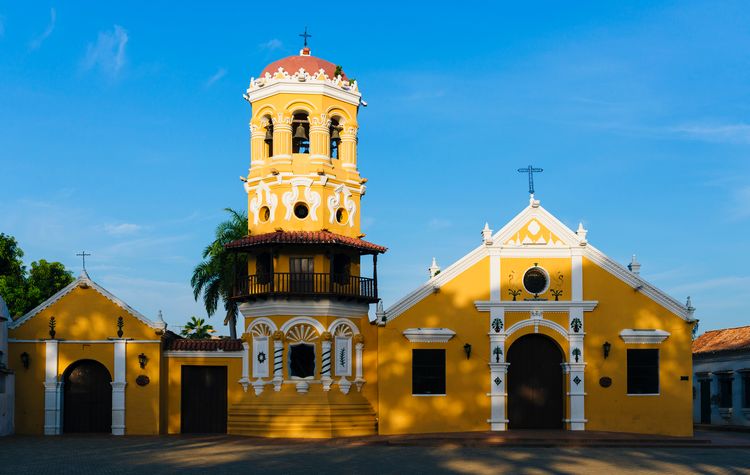 Colonial charm and historical significance make Santa Cruz de Mompox one of the best cities in Colombia for travelers to visit – though tricky to get to due to lack of land access, Kuoda can help plan a trip to this well-preserved, charming, yet secluded town. Founded in 1540 on the banks of the River Magdalena, Santa Cruz de Mompox, often referred to simply as “Mompox”, played a key role in the Spanish colonization of northern South America, serving as a port city to transport goods to and from Colombia. In the town’s historic center, most of the buildings are still used for their original purposes, providing an exceptional picture of what a Spanish colonial city was like. 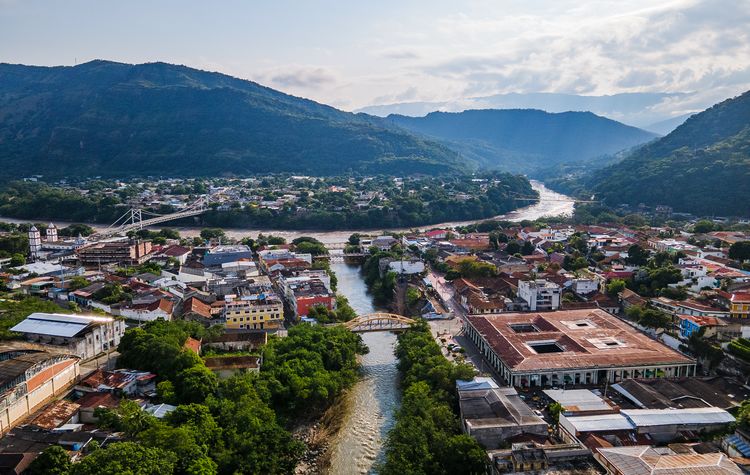 Founded in 1539 as one of the country’s most imperative river ports, Honda is one of Colombia’s oldest towns. Along the Magdalena River, this well-preserved city is a natural paradise and historical hub of Colombia. It was considered in the past as the first port of Nueva Granada (old Colombia), and currently it still retains a large number of bridges and buildings of the colonial era. Honda serves as an excellent weekend trip from Bogota to add to your luxury Colombia itinerary and often hosts festivals where visitors can shop for hand-made artisan handicrafts, try horseback riding, and listen to live music in the streets. 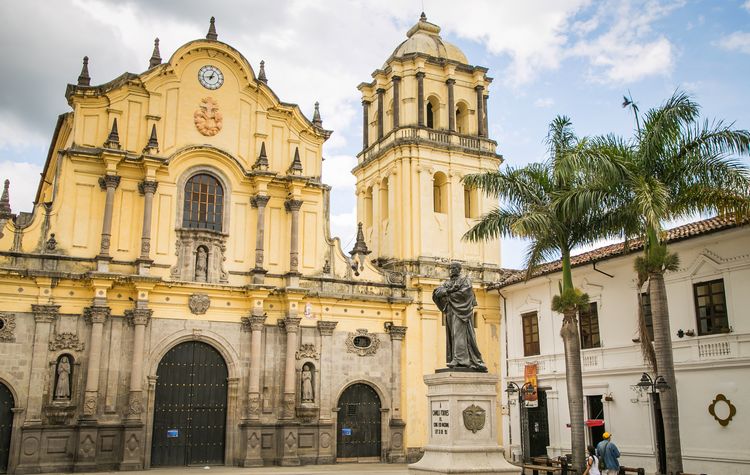 For travelers looking for well-preserved architecture, white-on-white colonial buildings and proximity to some of Colombia’s most well-kept natural beauty, a visit to Popayán is a must. Just a few hours’ drive from Cali, Popayán is well-known for its colonial historic center of Hispanic heritage, where various celebrations take place, including Holy week, which was declared a UNESCO cultural heritage of humanity in 2009.

While near Popayán, don’t miss out on the opportunity to explore Colombia’s rugged mountains, thermal waters, waterfalls and the hike to the crater of Volcán Puracé.

For the foodies, the city has plenty to offer too – having won notoriety from UNESCO as a Creative City of Gastronomy.

With immaculately preserved architecture, fascinating history, and subtle hints of luxury every step of the way, Kuoda is ready to help you plan your trip to visit Colombia’s most alluring colonial gems. Contact us to book your personalized luxury Colombia itinerary.