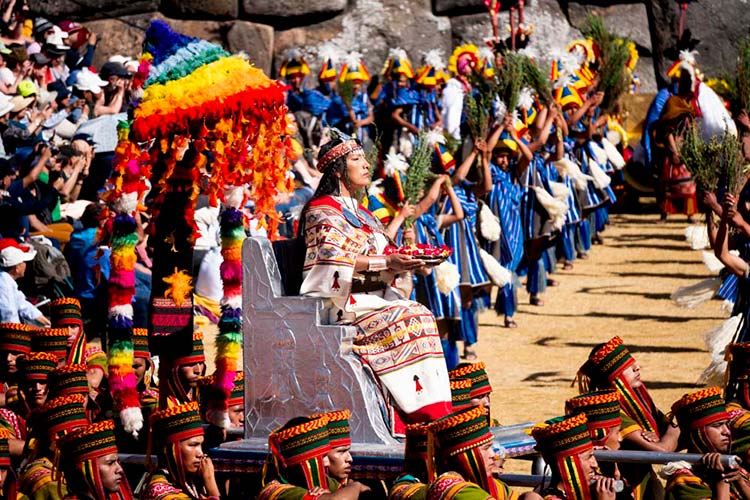 Have you considered attending the festival of Inti Raymi on June 24 during your private Peru tour? In Part 1 of this blog, we discussed the history and meaning of this celebration of indigenous Peruvian pride. In this installment, we bring you to this year’s event with photographs taken firsthand by our live local correspondent.

Inti Raymi is a yearly reenactment of the Inca Festival of the Sun that attracts thousands of visitors to Cusco every year. It occurs during the period around the winter solstice for the purpose of honoring and appealing to the Sun God, Inti, to continue to provide his light and warmth to the inhabitants of Pachamama, the Mother Earth.

It takes place in three successive acts, or stages, at three separate locations in Cusco.

The dramatization begins at Qoricancha, the Temple of the Sun. As the sun’s first rays emerge, the Inca (the emperor of the Quechua people) announces the beginning of the festival as the armies from the four suyos (regions) of the Inca Empire, Collasuyo, Contisuyo, Antisuyo, and Chinchaysuyo, converge upon the temple grounds.

The Inti Raymi celebration begins with the morning’s first rays of sunlight, as the Cusco community gathers at Qorikancha (Temple of the Sun) to begin the dramatization. The four armies of the Inca enter the arena, followed shortly by the Inka Emperor, who signals the beginning of Inti Raymi. Groups of colorfully costumed dancers make their entrance and the ceremony begins! A source of great pride among Cusqueñans,the reenactment attracts thousands of international and domestic tourists to Cusco each year.

In the next phase, the procession, along with the Inca, the Qoya (the main wife of the Inca) and the nobility carried by dozens of porters on separate elaborately decorated litters, head to the Plaza de Armas, the main square, where the coca leaf prophesy is performed. The sacred coca leaves are read for clues about the coming year. In “the meeting of the two times,” the Inca advises the modern-day Mayor of Cusco on what to expect and what actions to take in the coming year. 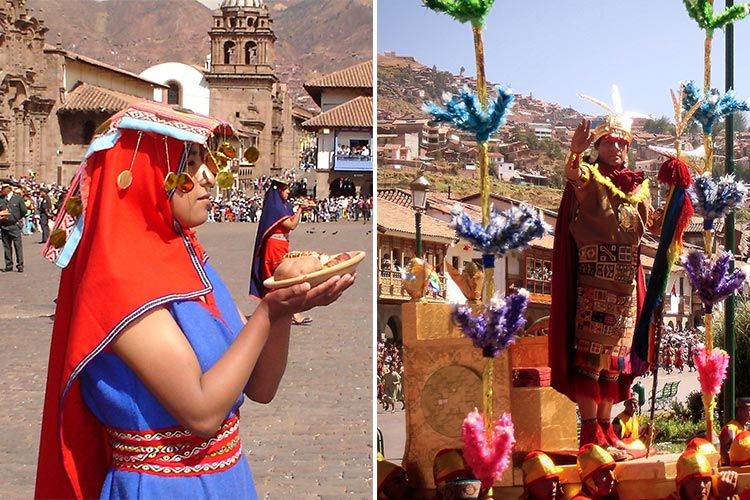 The second stage of Inti Raymi follows as the costumed procession make their way to the Plaza de Armas, where hundreds of people are waiting to commemorate the traditional festival. Crowds jostle for position to get the best view of the activities, as the Inca priests prophesy using the sacred coca leaves. In a portion called “the meeting of the two times,” the Inca emperor meets with the mayor of Cusco to give advice for the year ahead.

During the third phase, the procession moves to Sacsayhuaman, the imposing ruins overlooking Cusco. Here, three rituals are performed: the Chicha ritual, the Fire ritual, and the Llama ritual. Brilliantly costumed dancers come together and dance in celebration of their Andean heritage to the music of the pinkullo and the tinya (instruments similar to the flute and a small drum, respectively). The ritual ends as each of the brilliantly colorful armies form an enormous contingent and march together, signaling the end of the elaborate ceremony.

Now it’s onto Sacsayhuaman, the ancient ruin overlooking the city of Cusco for the third stage in the Inti Raymi dramatization, Colorfully costumed groups of dancers from each of the four suyos, or regions, of the Inca Kingdom, perform traditional dances for the excited crowds of onlookers. The dances will be followed by three ceremonies: the Chicha ritual, the Fire ritual, and the Llama ritual.

This year, we at Kuoda had a live local correspondent who attended and photographed the event in Sacsayhuaman. What follows is a pictorial displaying scenes from the celebration.

Dancing groups of warriors, robed in an elaborate headdresses and an array of brilliant colors, dance with spears to introduce the third part of the Inti Raymi reenactment. 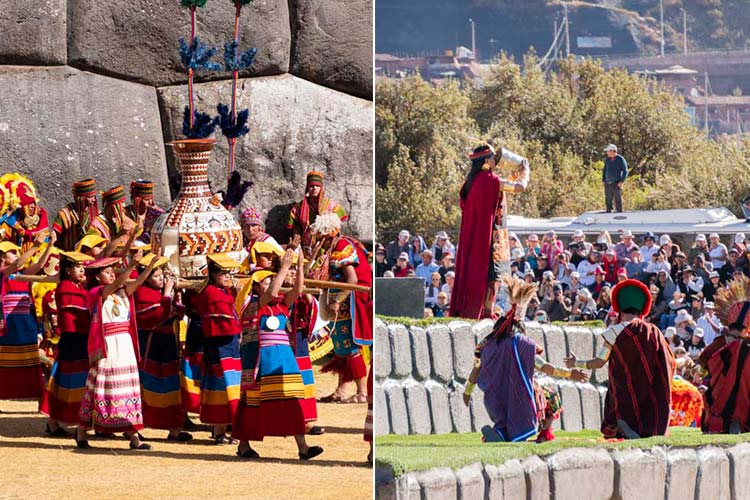 Chicha Ritual: A brilliantly costumed procession carries the sacred pitcher of chicha, a traditional fermented corn beverage that is shared among the celebrants, The enjoyment of chicha is an integral part of the Inti Raymi festivities, both during the reenactment, and throughout the city of Cusco over the course of the days surrounding the celebration. 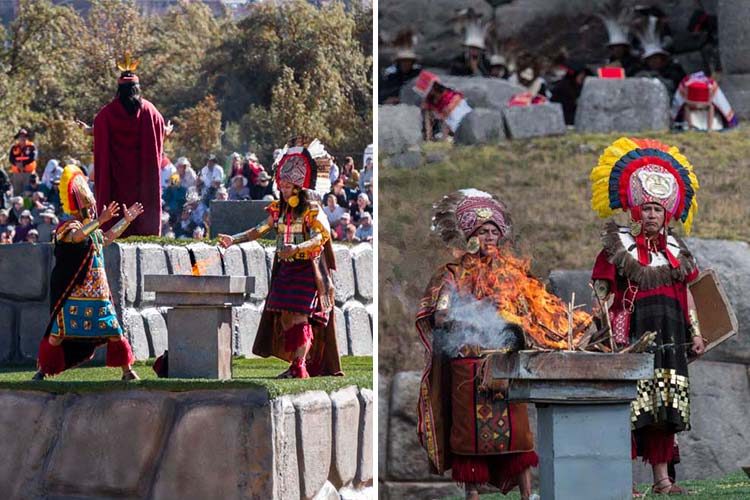 Fire Ritual: A golden bracelet reflecting the sun’s rays is used to light the sacred fire. The flames are projected onto a piece of cloth, representing the return of the Sun God, Inti, who warms and protects the Earth. 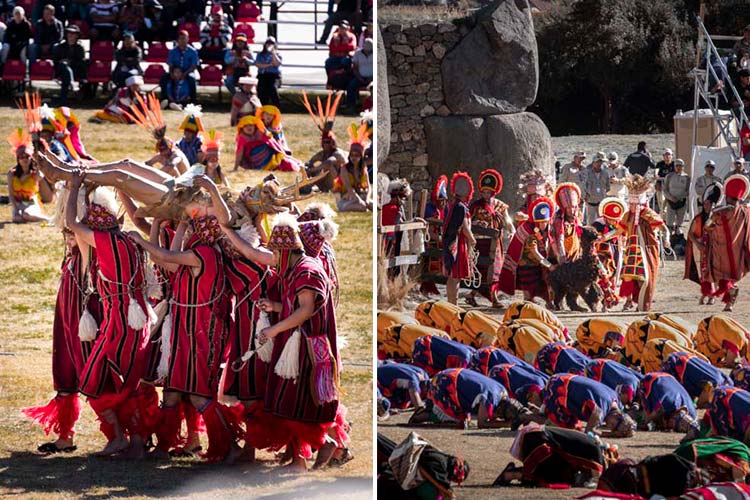 Llama Ceremony: A llama is sacrificed to the Sun God, Inti, and its entrails “read” to predict the fortunes for the coming year. These days, to appeal to modern sensibilities, the llama is not actually killed.

Inti Raymi ends with the departure of the armies, each denoted by its own brilliantly colored uniform, helmet, and geometrically-designed shield.

Interested in attending Inti Raymi on your Peru holiday?  We would be delighted to make the arrangements for you to join in the celebration, during your private Peru tour.