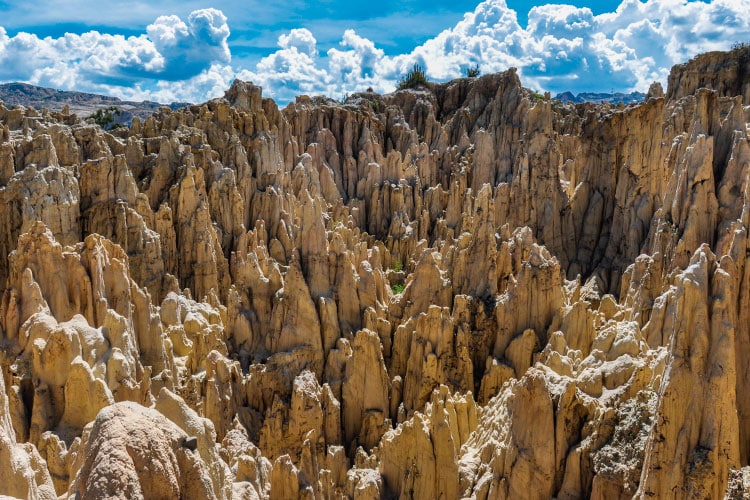 About 10 kilometers from Bolivia’s capital of La Paz lies the stark, alien landscape of El Valle de la Luna, or Moon Valley. This area is a protected geological area. It’s easy to see why it’s considered important to Bolivia, and the rest of the world.

Although the area of Moon Valley currently rests at 3,650 meters / 11,975 feet above sea level, thousands of years ago, it laid at the bottom of the ocean. Fossils have been found of sea creatures, and it’s not hard to imagine fish and other sea creatures swimming through the formations that make up the strange formations all around the valley. 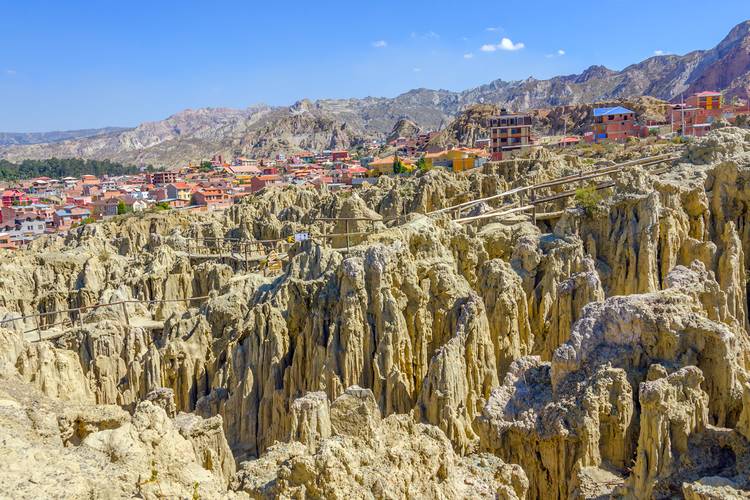 The mountains here are not made of stone but of a hard clay. There are also many different minerals, which give different colors to the many various forms. Due to the varied densities and durability of these different minerals, they erode at different rates. This is why the rains and winds of the Andes here have created these unusual formations, making the area almost a forest of stalagmites out in the open.

Each of these formations is very different from the others, and many have names all on their own. The most well known is the “Buen Abuelo”, or the Nice Grandfather, which looks very much like an old man wearing a hat. There are a ton of formations there with different names; some appear to look like animals, such as the Turtle Shell, while others may look like things people use in their daily lives, such as the Cholita’s Hat.

This valley does have the feeling of being on another planet, with its tall spires, interesting figures, and colored minerals weaving through the clay formations. It was made very evident just how otherworldly this place was when Neil Armstrong visited in 1969, soon after his journey to the moon. As he wandered through the towers and formations, he was reminded of his time spent on the moon. Because of this, he christened the area Moon Valley, or the Valle de la Luna.

Unfortunately, the same forces that created Moon Valley are also in the process of destroying it. The strong Andean winds and rains are continuing to we.ar away at the clay of the mountains, eroding away the formations that make this place so eerie. This ever-changing landscape is a stark reminder of the passage of time, and that no matter how permanent something may seem, nothing truly lasts forever.