6 of the Best Restaurants in South America 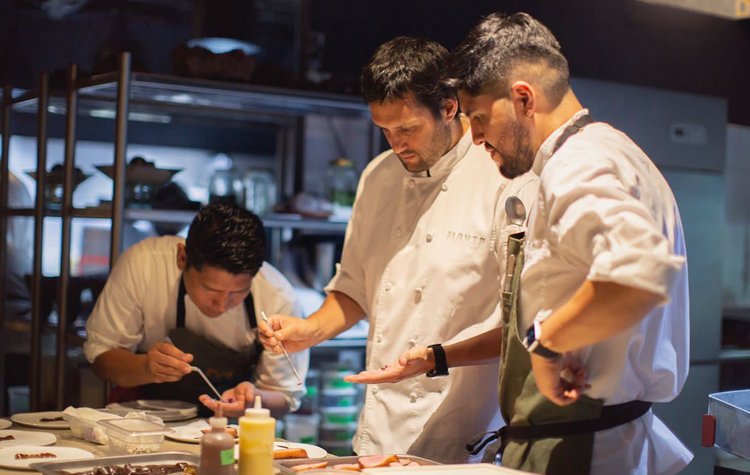 Last month, a series of panels compiled from global experts voted for the restaurants they believe deserve a spot on the World’s 50 Best Restaurants list, one of the most prestigious modern accolades in the culinary world. Though previously, South American restaurants have been overshadowed by their European counterparts, this year, 6 restaurants made the list in Peru, Argentina, and Chile – paying homage to South America’s brilliant and well-established culinary scene. For foodies looking to travel to the best restaurants in South America – here is your chance – these six restaurants are a must-visit on your next South America trip. 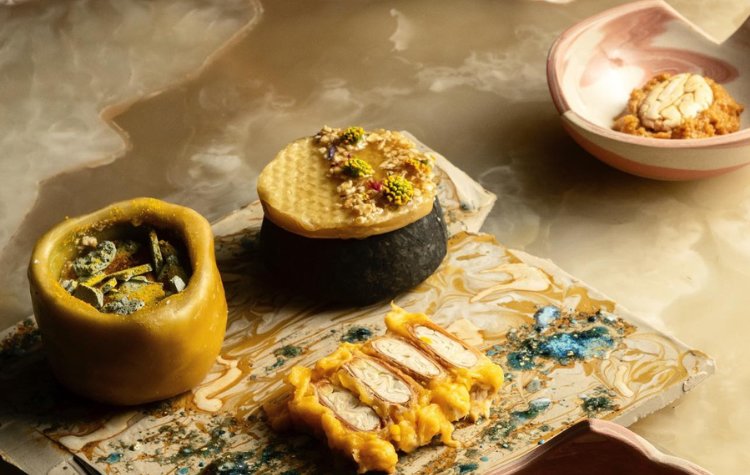 International food critics, locals, and travelers all agree – Central is one of the best meals you’ll ever have in your lifetime. Not only was this popular restaurant in Lima’s Miraflores district rated #1 in Latin America by The World’s 50 Best Restaurants list for four straight years, but the restaurant was also even featured on Netflix’s show Chef’s Table. Chefs Virgilio Martínez and Pía León’s flagship restaurant, Central, pays homage to Peru and Peruvian cooking. In 2021, León won World’s Best Female Chef, along with her and the restaurant’s many accolades.

The dishes celebrate the unique landscapes, history, and traditions of Peru, both past and present, by using an abundance of locally-sourced produce. Central’s plates are groaning with incredible biodiversity. The tasting menu features the finest food that land and sea have to offer: scallops, squid, and clams come fresh from the coast and the Amazon, while the Sacred Valley offers up pork belly and goat’s neck.

While the menu represents Peruvian ecosystems at their best, the team at

Central focuses strongly on sustainability. Recycling, composting, and closing the loop on waste ingredients all come second nature. Guests are given an insight into this diverse culinary world just by walking to the front door – taking them through a vegetable garden with over 100 plant species. 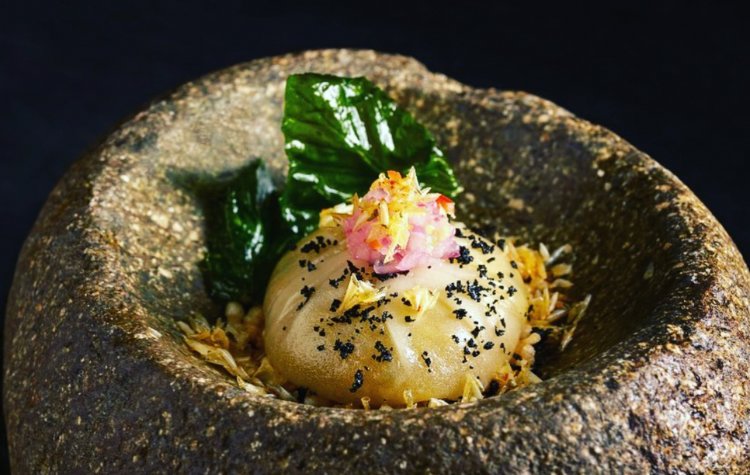 To call Maido a Peruvian-Japanese fusion restaurant is a disservice to the concept of Nikkei cooking. What is Nikkei? Simply put, Nikkei is a combination of Peruvian ingredients defined by Japanese techniques. But the dishes at chef Mitsuharu Tsumura’s Maido are anything but simple.

The fusion of Latin American and Eastern cuisines leads to an exciting and unusual menu. The 12-course ‘Nikkei Experience’ degustation is predominantly fish-focused: dishes such as Paracas scallops with green butter beans and miso feature alongside crab sushi and tapioca. The beef cheek is also not to be missed, served with tsukemono and a cloud of Jora corn. Round off the marathon meal with the surprising and delicate medley of lucuma ice cream, topped with soy sauce and macambo foam.

Tsumura began his love affair with gastronomy at a young age and it was his father who encouraged him to turn his passion into a profession. After graduating in culinary arts in the US, he traveled to Osaka to learn about Japanese heritage and tradition and his time in kitchens around Japan led him to specialize in sushi and Izakaya – Japanese-style tapas. In 2009, Maido was born, combining the culture and flavors of both his backgrounds.

The Maido dining room is jaw-droppingly artistic. Thick ropes cascade from the ceiling and hang low over the tables. On arrival, guests are greeted by a joyful ‘maido’, meaning welcome in Japanese. 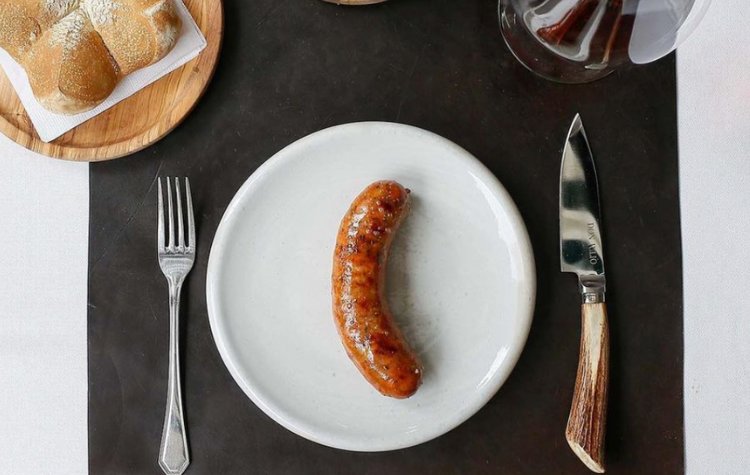 If there’s one thing Argentines are proud of – it’s their meat, and Don Julio delivers just that. Here, patrons can enjoy classic thick-cut steaks, local Argentine wine, and a true Argentine parrilla experience.  All the beef at Don Julio is from grass-fed Aberdeen Angus and Hereford cattle, raised in the countryside outside Buenos Aires. It is stored in a climate-controlled aging chamber for at least 21 days to reach optimum maturity. Then, it’s passed into the hands of Guido Tassi, the charcuterie specialist who heads up the kitchen and finally onto the plate. Match with beautiful Malbec for the full experience.

While Don Julio serves pretty much every part of the cow, owner Pablo Rivero recommends ordering house cuts like bife de cuadril, or rump steak, and entraña or skirt steak. For a starter, opt for the yellow corn, pumpkin and cheese empanadas and a selection of artisanal charcuterie such as chorizo, morcilla or blood sausage, and salchicha parrillera or spiral sausage.

Rivero, the son and grandson of established livestock producers from Rosario, opened the restaurant in 1999 in his early 20s. Now a respected sommelier as well as one of the city’s highest-profile restaurateurs, he is also known for his exemplary approach to hospitality and won Latin America’s 50 Best Restaurants’ Art of Hospitality Award in 2018. The restaurant also vies for the title of the premier parrilla in Buenos Aires and took home the award for The Best Restaurant in Latin America in December 2020.

Besides the specialty steaks, Don Julio proudly owns an extensive range of top-quality wines: the restaurant’s winery has over 14,000 Argentine labels. To display the magnificent collection, the 19th-century building’s interior walls are lined with empty bottles, converting the rustic space into a welcoming wine sanctuary. Diners from around the world can leave their personal mark by signing and writing messages on the labels. 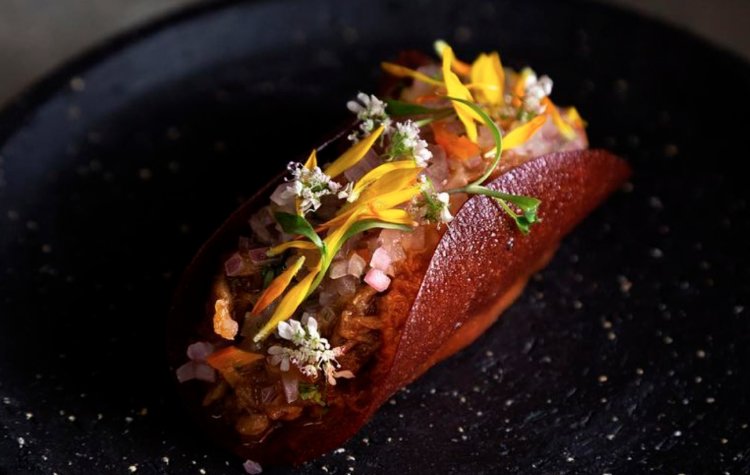 With its 12-course Yachay tasting menu focusing on Peruvian ingredients, Mayta serves dishes such as goat with Andean herbs and scallops with fava beans. Each plate is a work of art, with colorful produce front and center, such as thinly sliced ‘ham’ from the paiche fish shaped into an intricate rose. There’s also an à la carte menu with options like Amazonian ceviche or matcha tart with passionfruit ice cream. Mayta also doubles up as a pisco bar serving inventive takes on the national drink.

With great attention to sustainability, Pesaque works regularly with paiche, an Amazonian fish that needs to be eaten to prevent the destruction of other species. He serves it in everything from a delicate taco to a juicy chunk of tail. During the pandemic, the chef doubled down on research, working on recovering the biodiversity of the Ica ‘fertile desert’ region of Peru with his Yachay project. 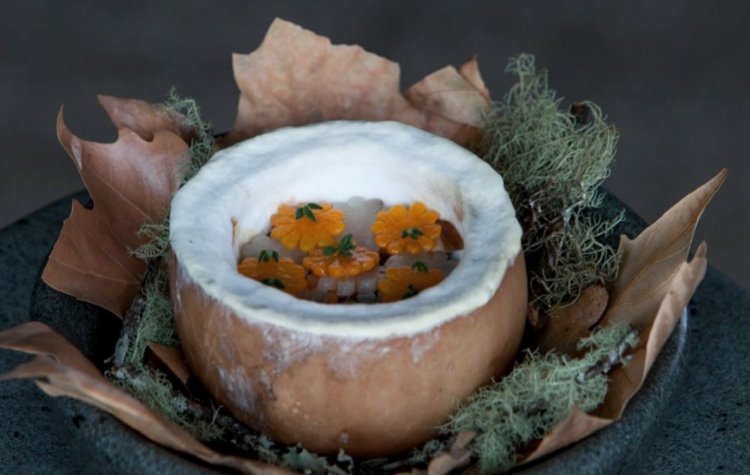 Opened in 2006, Borago displays Chile’s wide range of native foods, many of which you cannot find elsewhere, in innovative dishes and designs. In addition to being named as one of the 50 Best Restaurants in the World, Chef Rodolfo Guzmán has also won the 2015 Chefs’ Choice Award, which honors exceptional cooking talent all over the world.

In 2019, Boragó re-established itself in Vitacura, a suburb of Santiago at the foot of the city’s tallest mountain. Cerro Manquehue. The landmark makes both a stunning backdrop for the 54 diners served per service and a home for Guzmán’s food research center, which delves into the untapped possibilities of Chilean ingredients.

The menu, named ‘Endémica’, showcases the bounty that Chile has to offer. Guzmán takes diners through the regions with dishes such as pink Maule tomato steak with wild grapes and fruits, Patagonian lamb with figs and for dessert, a sea strawberry cake and ice brûlée with plants from the Atacama Desert – the arid plateau on the Pacific Coast. It’s an experience for all the senses, but diners are unlikely to get the same one twice, as the menu changes with the seasons.

Boragó is deeply rooted in Mapuche or indigenous South American culture. Inspired by the indigenous hunter-gatherers of Southern Chile and Argentina, Guzmán strives to incorporate the autochthonous plants of the nation into the restaurant’s vast pantry. He directs over 200 people, including foraging communities and small producers all over the country, to bring seasonal and fresh goods from plantation to plate. The ingredients come from coastlines, mountain tops, or even the restaurant’s nearby orchard.

Since its inception, the team at Boragó has placed high importance on sustainability, maintaining local ecosystems, and responsible sourcing. Its efforts earned it the inaugural Sustainable Restaurant Award at Latin America’s 50 Best Restaurants in 2018, an accolade that has enticed them to continue being a leader in the sustainable restaurant space. 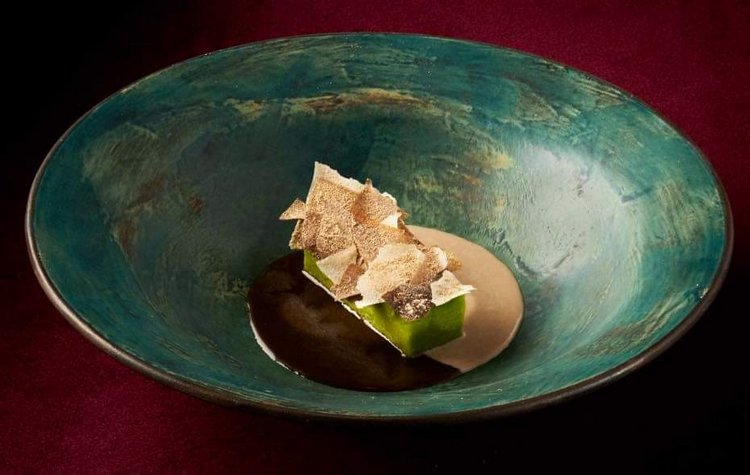 Colombia may not be known on an international scale for its restaurant scene, but Leo in Bogota is looking to change that.

Local celebrity chef Leonor Espinosa’s flagship restaurant showcases little-known Colombian ingredients such as copoazu, a genus of cacao, arrechón, an herbal drink and bijao, a banana-like plant, while championing local communities and gastronomic traditions. Since opening Leo she has had a great influence on Colombian cuisine and in 2022, Espinosa won the title of The World’s Best Female Chef, sponsored by Nude Glass.

Chef Espinosa’s love of anthropology, contemporary art, and culture is evident in both her cooking and the restaurant itself: a bold, modern room adorned with striking art pieces. The restaurant features two dining rooms under one roof: one led by the creativity of Chef Espinosa; the other featuring a bar and more informal eatery influenced by her daughter and sommelier Laura Hernández Espinosa’s passion for wines and Colombian distillates.

Dinner is split between an eight- or 13-course tasting menu, complete with delicate appetizers such as mussels with coconut and Galerazamba salt, or dried shrimp with snails and ants. The latter, although surprising, are crushed to create a crunchy, nutty garnish on the side of the dish. Standout mains include calf’s foot jelly, served with coquindo oil (a rare seed from the Amazon) and salt from the Manuare Salt Flats.

Leo’s menu, called Ciclo-Bioma, focuses on Colombian ecosystems, exploring the ways new species can be used in the kitchen. The origin of each ingredient is represented on a map of Colombia that shows how far the chef has traveled to source the unique products used at Leo. Those not wanting to sample the extensive wine menu can go for the non-alcoholic drinks pairing, which includes refreshing options like corozo berry juice or a corn drink.

Ready to sip, savor and dine your way through South America? Us too. Reach out to Kuoda to get in touch to plan the perfect luxury foodie itinerary through the region to taste some of South America’s most incredible cuisines. 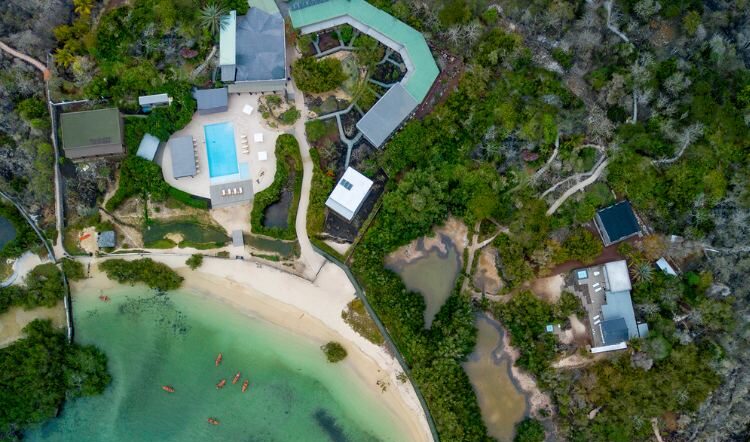 5 Incredible Hotels For A Luxury Trip To Ecuador 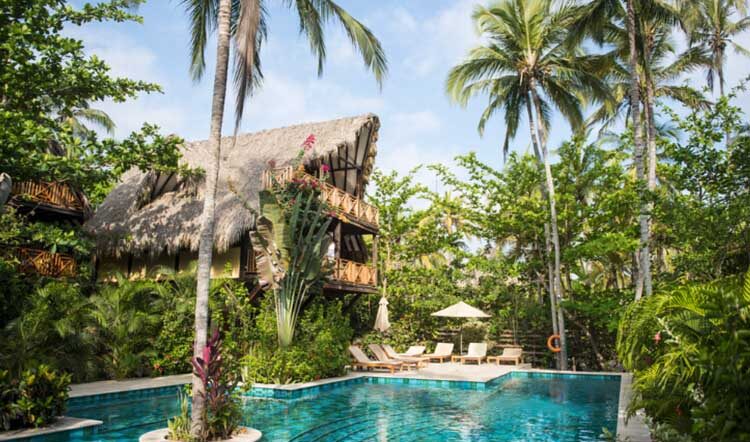 10 Luxury Hotels in Colombia For Every Type of Traveler 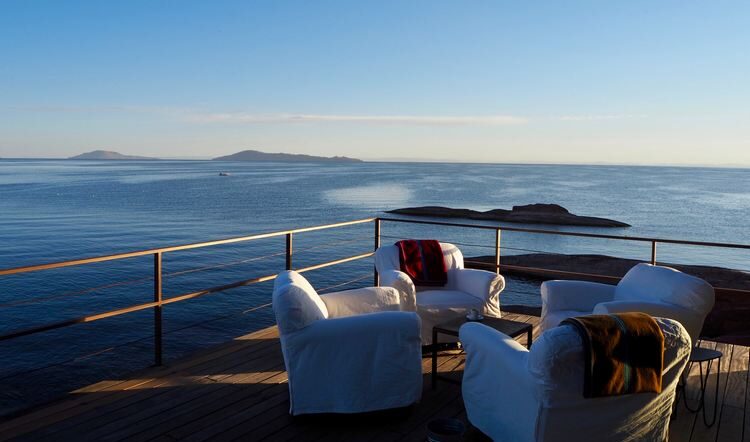 5 Unique Luxury Hotels In Peru For The Ideal Vacation