Everything you need to know about Ecuador Carnival 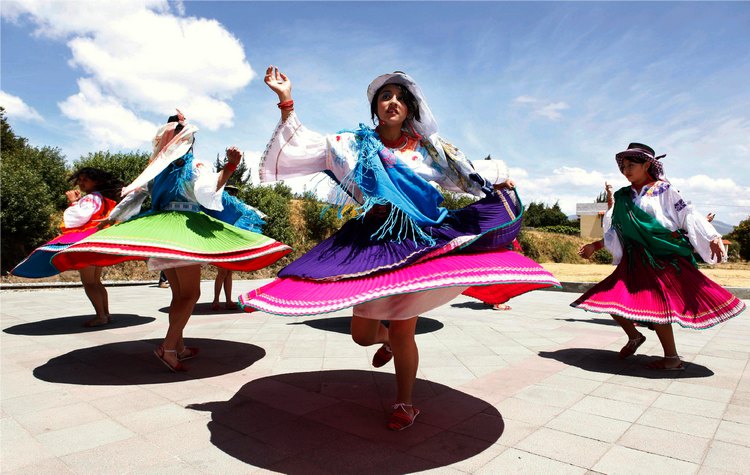 Carnival is a festival of many names. It is referred to as Fat Tuesday in English, Mardi-Gras in French, and Carnaval in Spanish or Portuguese. But whichever word you use, Carnival has become an exciting international phenomenon extending from both Catholic and, many scholars think, ancient Rome or even Sumer cultural traditions.

Ecuador Carnival (Carnaval or Carnavales) is one of the nation’s most electric celebrations, with residents anxiously marking their calendars in preparation every year. Let’s take a look into what makes Ecuador Carnival tick compared to the layered string beads and Cajun feasts in New Orleans Mardi-Gras, or fantastical feather costumes of Brazilian Carnaval. Perhaps, you will feel so inspired to plan your next Ecuador trip during Carnival!

What is the Ecuador Carnival, and why is it held? 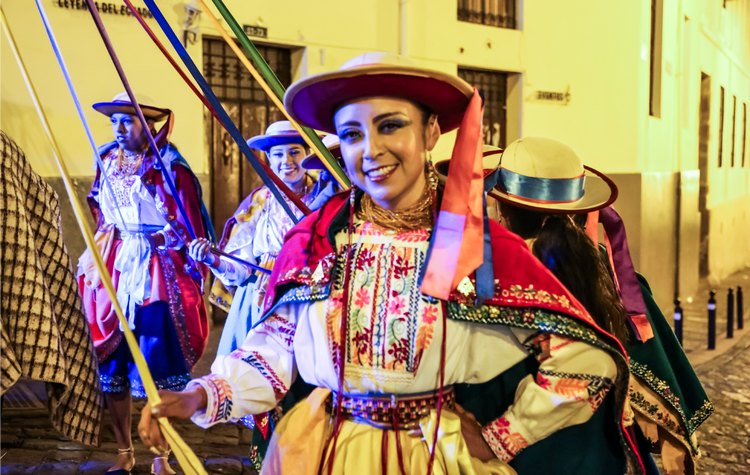 Ecuador Carnival aligns with the Roman Catholic calendar and tradition. But what’s truly special and unique about Carnavales in Ecuador lies in how local communities have always made the tradition their own, mixing Catholic origin post-conquest with pre-Hispanic cultures and traditions.

The earliest recorded evidence of Carnival in Ecuador is from newspapers dating back to 1860. These stories cite people celebrating by having water fights on the coast and flour fights in the Andean highlands. Then from the early 1900s, there are reports of kitchen staff and cooks saving their eggshells until Carnival to fill with colored water, seal with wax, and use in a good-natured water fight during the celebration.

Today, Ecuador Carnival means two full days of unbridled joy manifested in water and foam fights, allegorical figures on parade, and lots of feasting before Lent. For Kichwa communities in the Ecuadorian Andes, it is also a time to celebrate the end of the solar year and give thanks to Mother Earth.

When do people celebrate Carnival in Ecuador? 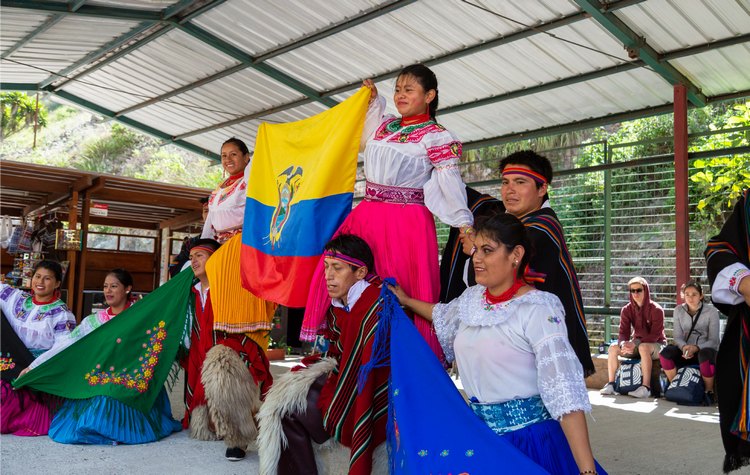 According to the Roman Catholic Calendar, the two official days of Ecuador Carnival are the Monday and Tuesday before Ash Wednesday in late February or early March. And until 1963, Kichwa communities of the Sierra (highlands) celebrated Carnival a month earlier in connection with the Pawkar Raymi festival, in which they celebrate the solar New Year.

1963 marked the year that the dictator Ramón Castro Jijón forcibly changed the date of Carnival in the Andes to give preference to the Church and the Catholic meaning of the celebration before Lent. However, despite this discriminatory ruling, Kiwcha communities never stopped celebrating Pawkar Raymi and still do every year to mark the solar New Year.

Must see places during the Ecuadorian Carnavales

Ecuador is an incredibly culturally and geographically diverse country, and it is also quite a compact one. So, the fact that Carnival regional celebrations in Ecuador are as similar as they are distinct makes for an enlightening and rich experience. 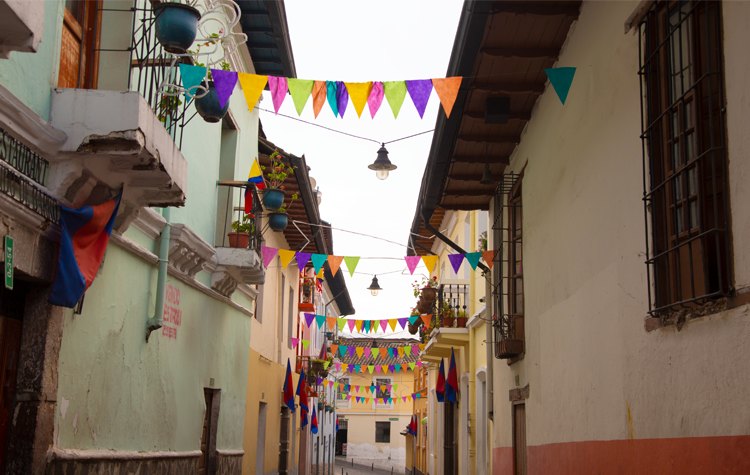 As Ecuador’s high-altitude capital, Carnival celebrations in Quito do not disappoint. The most typical signs of Carnival in Quito include 1) children of all ages wielding cans of foam and not afraid to spray any unsuspecting passerby, 2) lively water fights, and 3) surprising flour bombs. 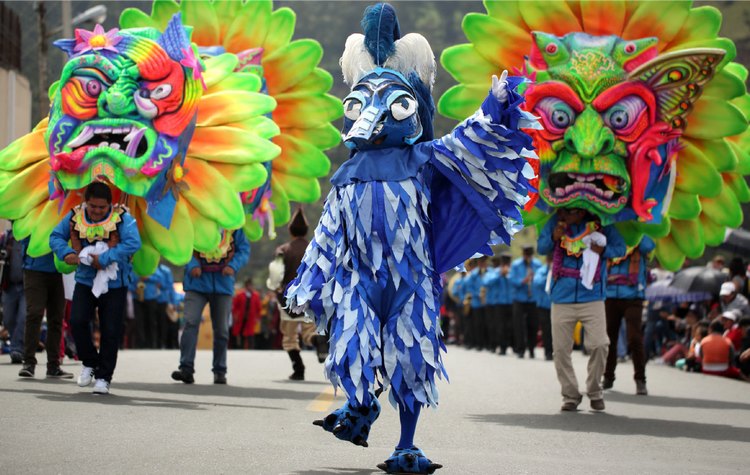 Guaranda, together with Ambato, are the Ecuadorian regions known for the most representative Carnival celebrations. In Guaranda, they pull out all the stops. We’re talking streamers filling every corner, flower pedals galore, flour and water games, lavish floats promenading through the streets, dances, and live music.

No one sleeps, and they don’t care! The giddy happiness of being covered from head to toe in a combination of water, confetti, foam, and powders is only matched by the incredible parade of food. Carnavales in Guaranda is the most anticipated event of the year. 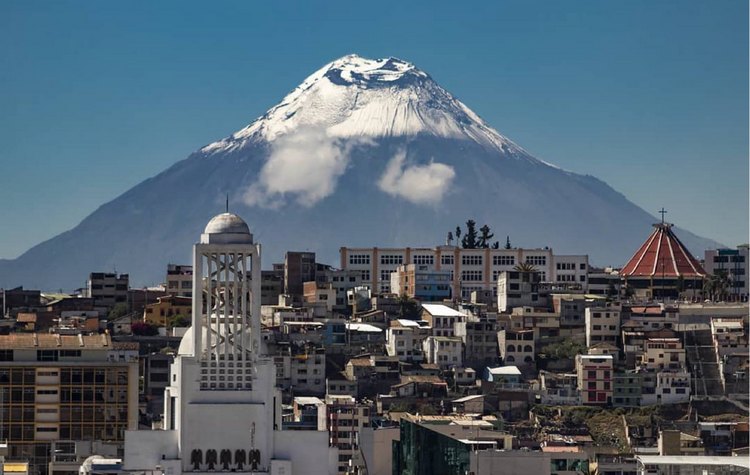 Ambato, Ecuador, celebrates Carnival with their own regional name for the festival: La Fiesta de las Frutas y las Flores (The Fruit and Flower Festival). In Ambato, you won’t need to dodge any water balloons, buckets, nor foam spray, because, in Ambato, people only play Carnaval games with flowers, as well as eat plenty of locally harvested fruit, and dance the night away. 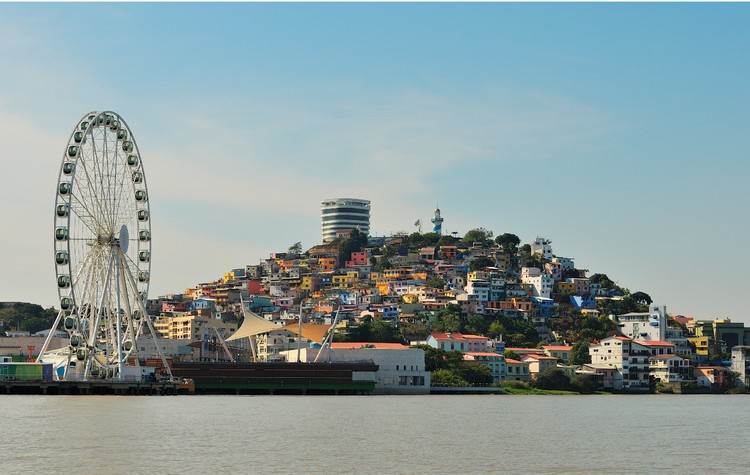 Being on the coast and having one of the most pleasant climates in Ecuador affords Guayaquil an entirely different kind of Carnival. Thus, Guayaquil holds the Ecuador Carnival, probably most reminiscent of Brazil.

Other fun tidbits about the Ecuador Carnival

In addition to the raucous flour and water games, ornate decorations, larger-than-life floral arrangements, never-ending parades, and palpable excitement in the air, Ecuador Carnival would never be the same without specific foods, music, dance, and traditional costume. 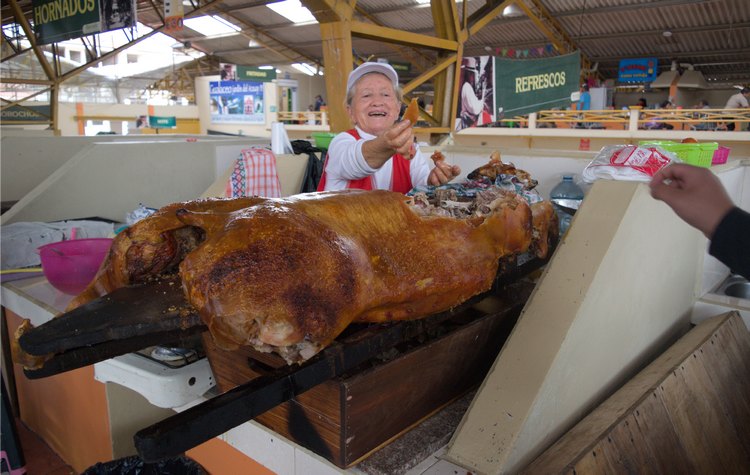 Each region boasts its own distinct recipes and variations on the classic foods served during Ecuador Carnival. Some of these classics include la fritada, savory fried pork stewed with orange juice, cumin, garlic, onion, and other local spices, and the chigüil, a snack made of cornmeal, stuffed with cheese and wrapped in corn leaves – not the husk, but the green leaves of the stalk.

Throughout the country, people drink plenty of beer and other types of recognizable libations during carnavales; however,  two beverages represent the festivities above the rest: jucho and canelazo. The former is a hot non-alcoholic beverage made from a type of black cherries called capulí in Ecuador and Peru, apricots, and plenty of spices like cinnamon and clove, while the latter is a hot alcoholic beverage made from cane alcohol, cinnamon, and other spices. 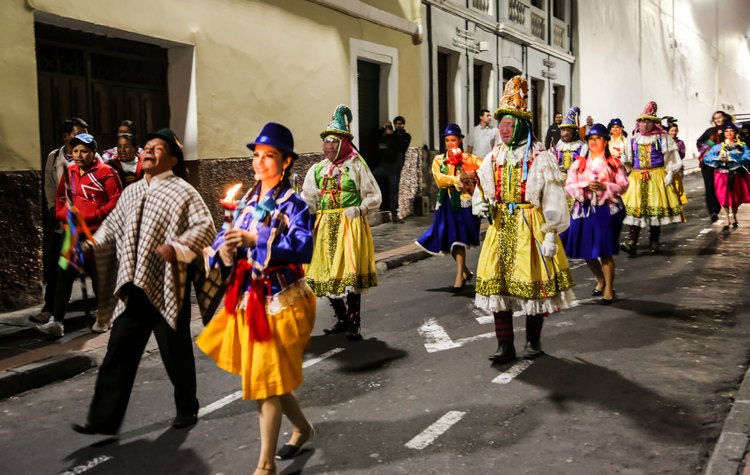 Dance and live music are ubiquitous during Ecuador Carnival. Coordinated dancers lead the way, promenading down each street as live bands trail behind each dance troupe. Every individual becomes entranced by the local melodies.

On the Ecuadorian coast, you will hear traditional Afro-Ecuadorian sounds of the marimba. In contrast, in the central Andes, traditional flutes, string instruments, and bombo drums dominate. Guaranda even has a traditional song dedicated to Carnival with the refrain, “Qué bonito es Carnaval,” How beautiful is Carnaval! 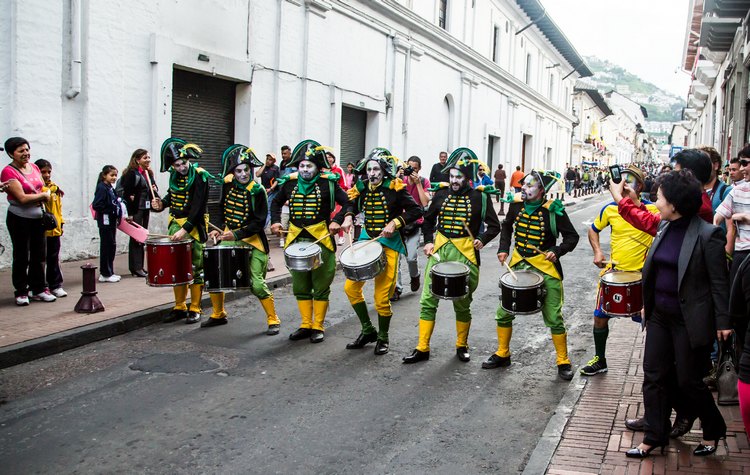 Just like the party itself, the costumes are loud and incredibly colorful. The dancers color-coordinate within their troupe, so if the dress is predominantly yellow, they will wear yellow hats and plenty of embroidered flowers. Some costumes are even meant to represent giant flowers or fruits of all kinds.

If you’re thinking of taking a trip to the equator, visiting the Galapagos, and/or any of the other incredible sites Ecuador has to offer (such as Volcano Alley!), consider coordinating it with Carnival.

For just a couple days in late February or early March, depending on the year, you can indulge your inner child, let loose in the streets, dancing and playing, and living for the festive moment! Contact us to learn more about how to incorporate Ecuador Carnival into your next vacation. 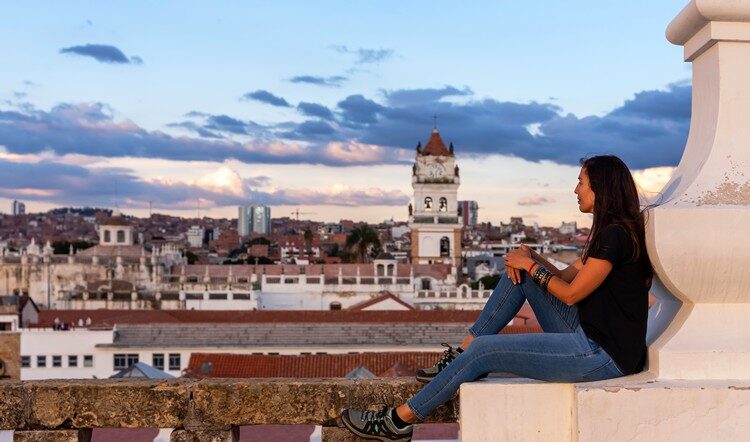 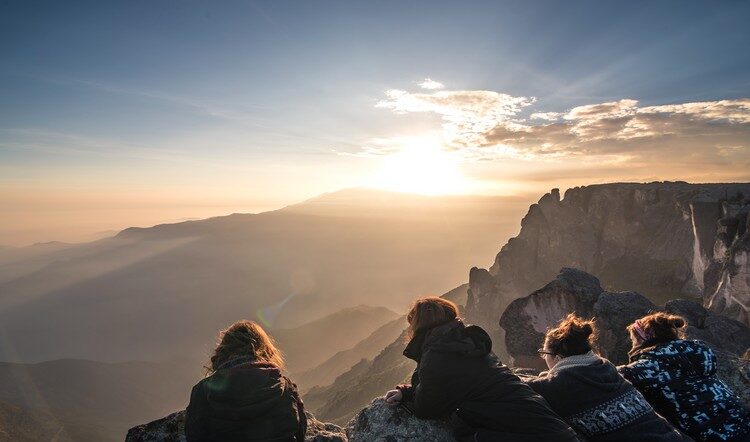 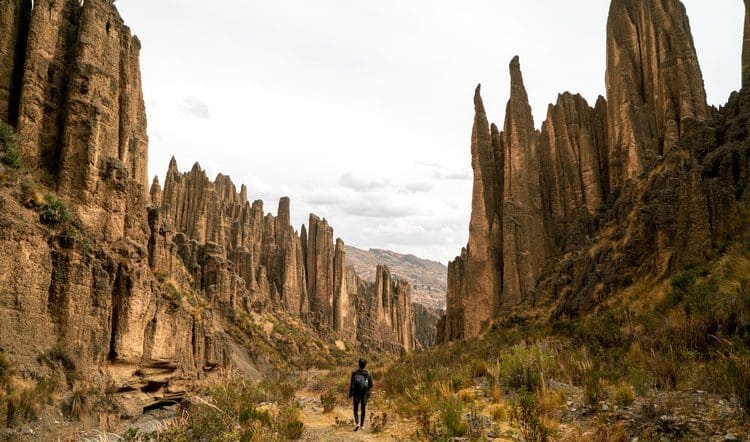 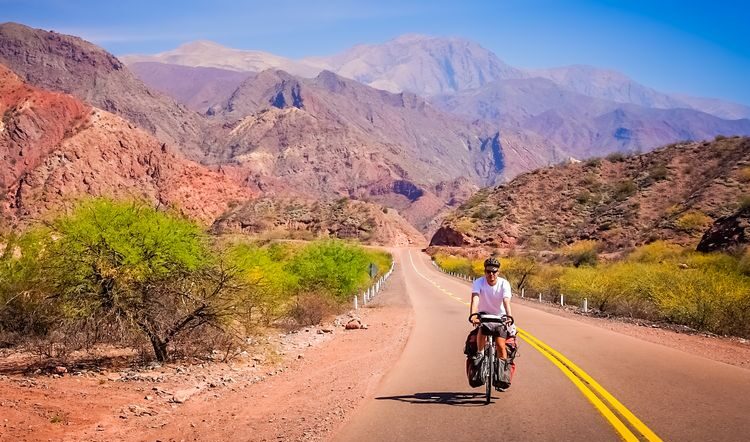