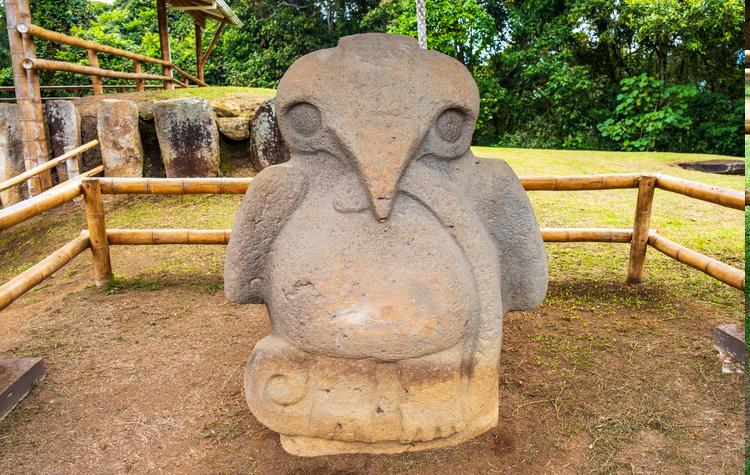 Huila is a sleepy southern department of Colombia and probably one of the most unlikely places you’d expect to find tourists. But it’s here, in the twin towns of San Agustín and Isnos, that one of South America’s greatest ancient mysteries can be discovered.

These towns and the surrounding region are home to pre-Colombian monuments, burial grounds, and megalithic sculptures that were built by a civilization which remains a mystery until this day. It’s this history that’s begun to draw more and more tourists every year.

But beyond the UNESCO World Heritage and other incredible archeological sites found here, this area is also a great place to get world-class coffee, experience beautiful Andean landscapes, partake in some adventure tourism, and more. Keep reading to learn all about the stone gods of San Agustín, Colombia, and what else you can do while you’re here. 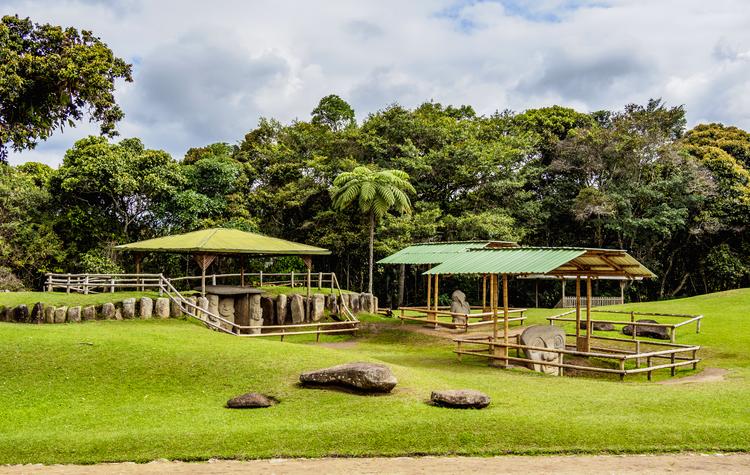 The main reason tourists have started flocking to San Agustín is to visit San Agustín Archeological Park. Located in the southwestern Andes, amidst green mountainsides covered with coffee and plantain farms, this park stretches 116 hectares between San Agustín and the nearby town of Isnos.

This compound is actually the biggest compound of megalithic funerary monuments and statuary, terraces, burial mounds, funerary structures, and stone statuary in South America. It’s also where you’ll find Fuente de Lavapatas. This incredible religious monument is carved into the stone bed of a nearby stream.

Listed as a UNESCO World Heritage Site in 1995, this park is only starting to gain international attention as of late. In the off-season, it’s still possible to visit and have it almost all to yourself – along with knowledgeable and professional, English-speaking guides that will unveil all there is to know about the park. 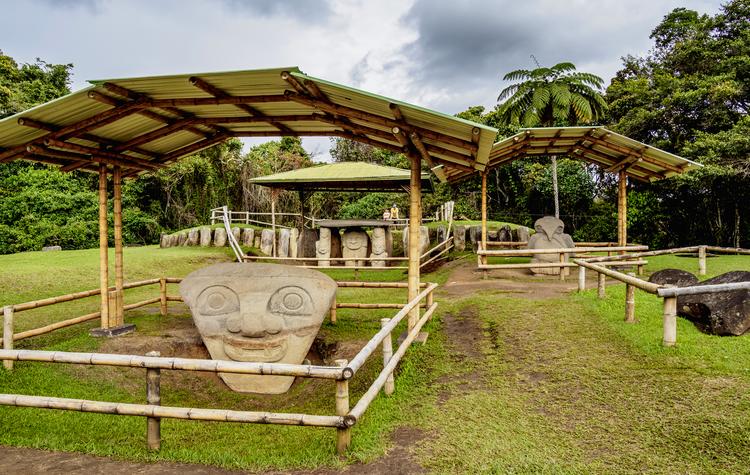 Travelers interested in history and pre-Colombian culture will be absolutely blown away by the Stone God Statues of San Agustín located in the Archeological Park. Considered megalithic structures, the statues range from one to seven meters and can weigh more than one ton.

Gigantic representations of Gods and mythical animals feature themes around the sun and moon, death and birth, and other aspects of life’s duality. They’re also thought to act as guardians for the many graves around the Park. However, the true purpose of the stone statues of San Agustín remains a mystery, as do many of the details surrounding the people who carved them over 1,500 years ago. 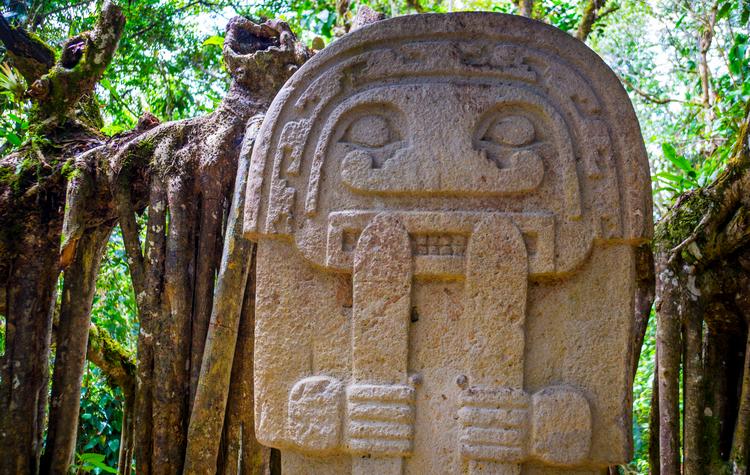 Today, San Agustín is a small town of just over 18,000 people. But this region was home to a flourishing pre-Colombian civilization that roamed the land between the 1st and 8th century. The stone statues of San Agustín are all that remains of these mysterious people.

Indeed, archeologists still don’t even know the name of this culture and there’s an estimated 90% more statues and ruins buried beneath the earth that are yet to be uncovered. There may even be Mayan-like pyramids buried in the area that we’ve haven’t yet found.

Archeologists know very little about the people who built the stone statues, but they do know a few things. We know that women were treated as both equals and superiors, with women leaders a common feature of society. We know that they knew advanced mathematics, used advanced surgical procedures in their medicine, and regularly consumed natural hallucinogenic plants. Much of their cosmology centered around life after death and they practiced human sacrifice as part of their belief system. 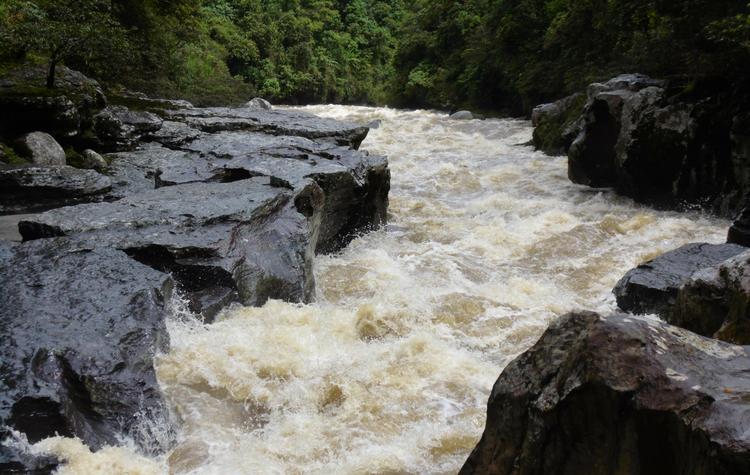 There’s a wealth of history and culture in San Agustín, but there’s also a burgeoning adventure tourism sector to keep everyone in the family happy.

The Magdalena, Colombia’s longest river, runs fairly close to San Agustín. White water rafting down this massive waterway has become one of the most popular non-archeological excursions in San Agustín. There’s everything from class 2 rapids for beginners to class 5 rapids for the far more experienced. You might also try your hand at rock climbing or mountain biking in Villa de Leyva.

Treks are also a great way to explore this region. If you’re up for a challenge, you might attempt the 3-day hike to the sacred Laguna de Magdalena, where the Magdalena begins. This trek isn’t for the faint of heart, but walking through the misty, isolated moorland of the Paramo de Las Papas make the grueling terrain worth every step.

Other Things to Do in San Agustín 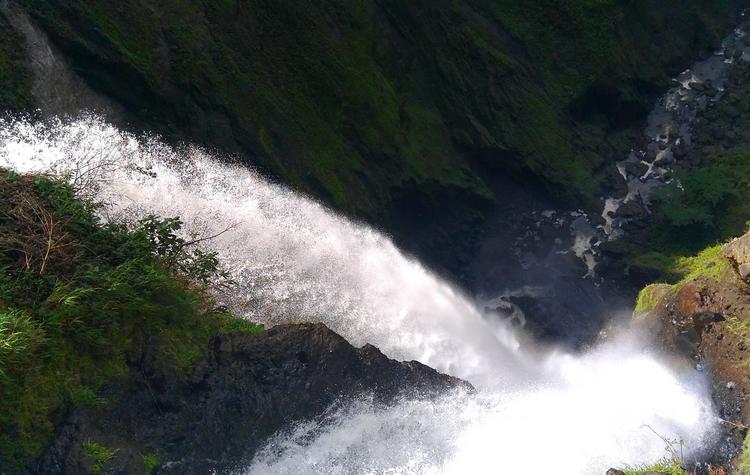 To get off road without having to push your body to its limits, you might also consider a jeep tour. Jeeps can take you to some of the more remote sites in the area, and many tours arrange perfectly balanced day-circuits that cover archeology, nature, and culture all in one day. You’ll see ruins and other sites that are less frequented, waterfalls, river valleys, and museums.

While the rolling Colombian Andes mountains are easily traversed on foot, one of the most enjoyable ways to see yourself around the area is on horseback. From the top of your ride, you’ll enjoy beautiful views of the Andes mountains, coffee farms scattered along their sides, and a glimpse into rural Colombian life.

By horse, you can also access some of the harder-to-reach sites, such as Le Pelota, El Purutal, and La Chaquira. The former two sites have statues that are colorful and unique to the area while the latter is located at a precipitous and breathtaking viewpoint over the Magdalena. 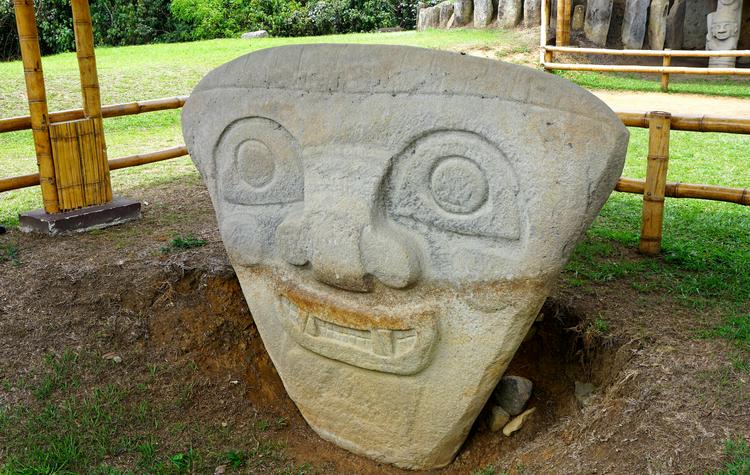 Although the stone gods of San Agustín Colombia have only recently come to the attention of tourists craving history and culture, their popularity has quickly grown. This is, after all, the largest collection of pre-Colombian megalithic stone structures in all of South America. Not to mention that the entire region is scattered with mysterious archeological sites.

And on the days you’re not soaking up all the history, there’s plenty of other activities in San Agustín, including rock climbing, white water rafting, trekking, and horse back riding. Add San Agustín to your Colombia travel itinerary today.