MYSTERY OF THE ÑAUPA HUACA 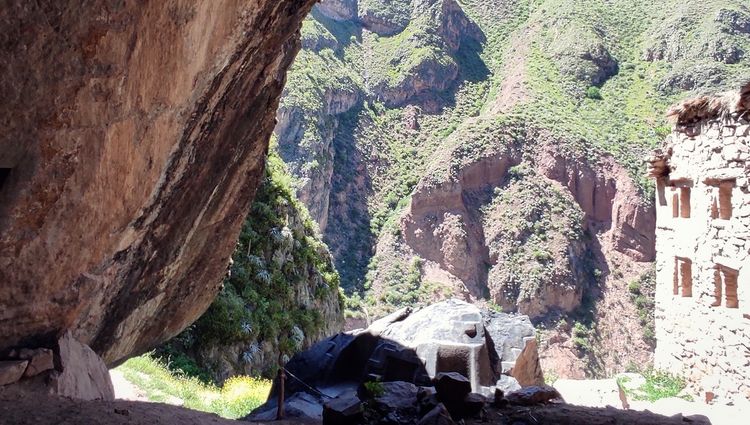 There is a mysterious hidden megalithic structure located off the road between Urubamba and Ollantaytambo in the Sacred Valley. Some believe it could be a portal or gateway to other dimensions. Its difficulty of access and partially hidden location have caused archaeologists to speculate that it was used by advanced Quechua shamanic practitioners to achieve paranormal levels of consciousness, and only by those who were privy to its secrets. The site is called Ñaupa Huaca in Quechua, Ñaupa means “The Ancient Ones” and Huaca means “Temple.” This is a little- known, off the beaten path site, whose existence was known only by a few until a few years ago.

The trek to this site begins on foot following some railroad tracks to an ascending dirt trail. After climbing this steep trail for approximately fifteen minutes, Inca stonework is visible, including terracing, walls, and steps leading up to a triangular carven cave entryway. Inside the entryway, a megalithic throne or altar carved from one piece of bluestone is set. Its three levels bear some resemblance to the Andean Cross of Inca cosmology. Also note, its precise geometrical structure stands out in stark contrast to anything else encountered nearby. The trapezoidal tri-level structure is also reminiscent of Egyptian megaliths discovered in the Middle East and thought to be thousands of years old. It is believed that the technology to create these structures was not available to the Inca, thus adding to the mystery. Is the structure even older than archaeologists can guess?

On the other side of the cave, there is a “false” doorway carved into the hard andesite stone. As with the altar, the mystery of how the precision geometry in the doorway would have been achieved with the Inca’s bronze tools, or what tools could have been used to make it, is open to speculation. As far as the physical structure of the doorway, it is solid, meaning there is no actual physical space to walk through. It is, by all appearances, a “doorway without a door.”

The locals have great reverence and respect for this ruin, as should anyone who feels challenged to visit it. They say that inhabitants of the spirit world are able to traverse the threshold during the most powerful hours of the day, twilight and dawn. Known as ñaupas, these spirit people can be very dangerous and are best left undisturbed, especially by those who are not familiar with them. It’s speculated that the stone megalithic throne could have been used as an altar for shamans to be able to also pass through this magical doorway. Shamanic ritual offerings can be observed on the threshold of the portal.

Increasingly, science is corroborating through Quantum String Theory and other disciplines that the universe contains many more dimensions than those that can be observed by the physical eye and by normally accessible state of consciousness. Perhaps Arthur C. Clarke, the science fiction author, put it best when he said that ‘Magic’s just science that we don’t understand yet.’

The persistent mystery of what is the exact use for the Ñaupa Huaca and who can pass its threshold (human or spirit) and the answers to profound questions regarding the possibilities of inter-dimensional travel may be just a stone’s throw into the future. Meanwhile, if you have the rare privilege of visiting one of these portals on your Peru trip, a healthy respect for their possible connections to the unseen realms of existence is definitely in order. Always remember to approach such mysterious sites of power with due reverence and respect.