How Christmas is Celebrated in Peru 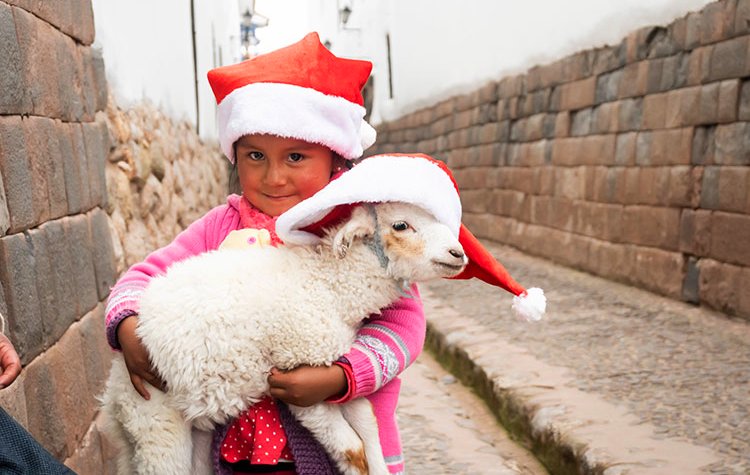 December is here and so is the holiday cheer! Let’s take a look at how Christmas is celebrated in South America. Our first stop: Peru.

Though absent of snow and fir trees, Peru is a country where the majority of the population is Roman Catholic and, therefore, Christmas is popularly celebrated. In fact, come December, it’s not uncommon to walk the streets of the capital Lima or other large cities such as Cusco and Arequipa and witness the hanging of lights and decorations. And as the holiday approaches and temperatures (in most of Peru) rise, traditions abound and locals become more festive; think massive nativity scenes, pisco, fireworks and amazing food (after all, this is Peru we are talking about!).

It may not be a white Christmas, but Christmas in Peru is celebrated with gusto and a unique cultural spin for travelers visiting from the northern hemisphere. Read on to discover how Christmas is celebrated in Peru. 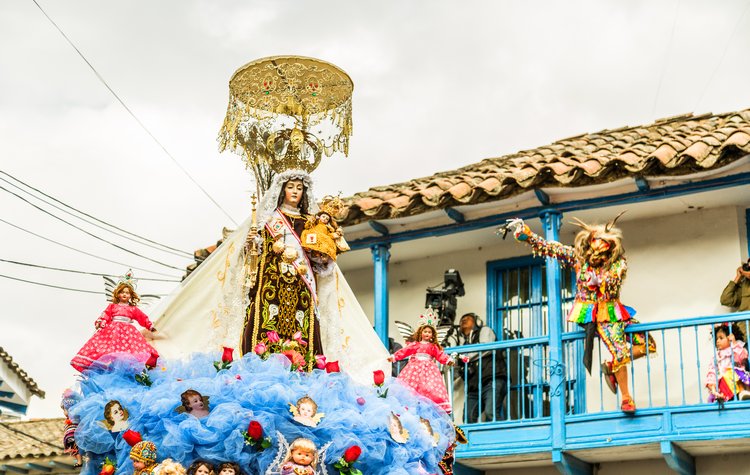 How did an Andean nation, recognized as the center of the Inca culture— which was largely pagan and worshiped a pantheon of gods— become largely Catholic?

It is no big surprise that, once conquered by the Spanish in 1532, the Incan polytheistic beliefs would soon after be replaced by Roman Catholicism. Spanish missionaries arrived in the 16th Century and, despite ongoing revolt and rebellion from indigenous peoples, Catholicism would be the only religion allowed in the country until the 20th Century.

Today there is great religious freedom in Peru however it is estimated that at least 70% of the country is Catholic. This has a great influence on Peru’s social and political life, not to mention the festivities carried out during Christmas time.

Decorations leading up to Christmas 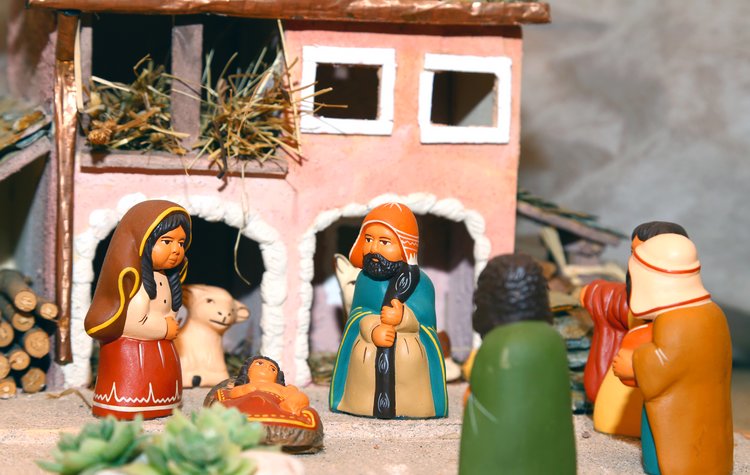 In public parks and in front of churches, large nativity scenes (nacimientos) slowly develop throughout the month of December. An Andean Joseph and Mary appear, surrounded by llamas or alpaca in wait for the revelation of Niño Manuelito (baby Jesus). The revelation takes place at midnight on December 24 (Noche Buena).

If you get the chance to spend Christmas or the weeks leading up to the holiday with a local family, you will be amazed by the effort that goes into creating a handmade nativity set.

In Cusco, locals often buy the pieces for their nativity scenes at the Santurantikuy (literally meaning, “Selling of the Saints” in Quechua). This historic art and craft market, which began in the 1500s, takes place every year on December 24. Artisans and vendors from the provinces converge on the Plaza de Armas en masse, bringing moss, herbs, painted figurines of saints, llamas, alpacas and much more.

Christmas trees are becoming more common in Peru. In Lima, many district parks will deck out and light up an artificial tree as well as a nativity set. Traditionally, families would spread gifts around the nativity manger though small Christmas trees are growing in popularity.

A unique Christmas experience in Peru 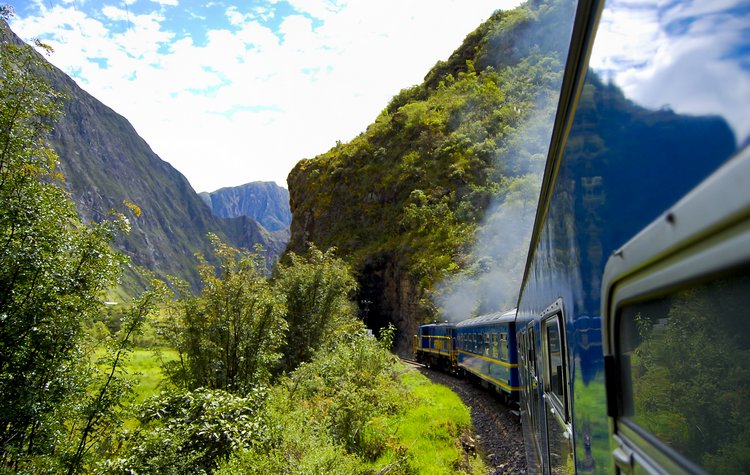 Surround yourself with snowcapped mountains on Christmas when you travel to the Sacred Valley of Peru. Located in the Cusco region, the Sacred Valley (Valle Sagrado) cradles an expansive countryside, lush with native crops. Framing the small towns that form the valley are terraced hills and majestic mountain peaks.

In this quiet and laidback section of southern Peru, one can truly partake in slow travel and dip into local culture, ancient history and nature explorations. During the month of December, the Sacred Valley turns a vibrant green, fed by rainfall and the Andean sun. Be ready to experience all kinds of weather and landscapes!

Take a luxurious train ride to Machu Pichhu, located in the high jungle, and be awestruck by the ingenious craft and skill of the Incas. In the evening, return to your boutique hotel for a gourmet dinner or enjoy a nightcap outside your private suite as you gaze upon the soothing gardens illuminated by moonlight.

A custom-designed travel experience that teaches you to slow down and enjoy the moment? That sounds like the ideal self-gift for Christmas. 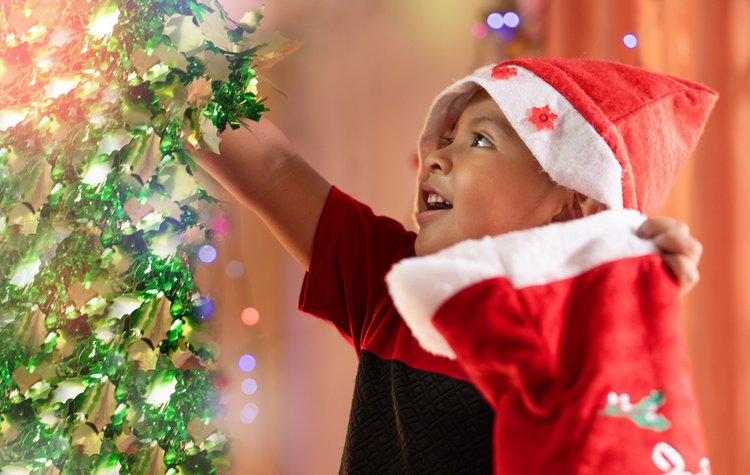 While the big day for those celebrating Christmas is usually December 25, the main Christmas celebrations in Peru begin the day before. December 24 is referred to as La Noche Buena (Good Night) and is centered around religious activity. At 10pm, a mass known as misa de gallo is held, after which families return home to ring in Christmas Day with a feast at midnight.

If you can’t imagine eating a big meal at midnight, consider that many Peruvians won’t go to bed until hours afterward. Typically celebrated with extended family members, the youngest family members continue to open and exchange gifts while elders pour the champagne and enjoy a jovial family moment.

Throughout December fireworks light up the skies in Peru as locals seemingly can’t hold in their excitement for the big day. On Noche Buena the fireworks really make a big bang, with the colorful explosions sometimes carrying on for hours into the night.

In true Latin style, Christmas celebrations in Peru carry on into the wee hours. Unsurprisingly the streets are hushed come Christmas afternoon, as many are sleeping or nursing a hangover. For those who had a more tame celebration, this can by a beautiful moment to take a walk with the family. 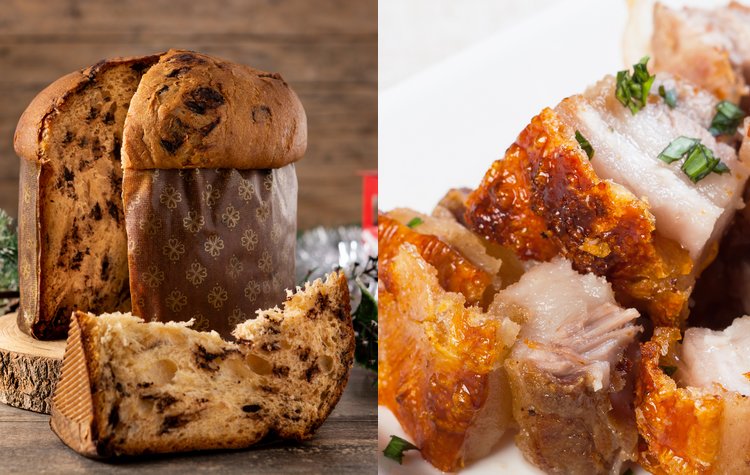 Now, back to that midnight feast. Peru is the gastronomic capital of South America, but long before the nation was showered with international culinary awards existed the tradition of the bountiful Navidad feast.

Roasted turkey typically takes center stage, though it is not uncommon to see lechón (roast pork) instead of or in addition to the bird. Depending on the region (and even the family) side dishes can include tamales, arroz árabe (a variation of Arabic rice, typically with nuts, raisins and spices), applesauce, Russian beet salad (ensalada rusa) and the beloved aji sauce.

Champagne and pisco cocktails are served for the adults while the children salivate for a mug of hot chocolate. Even the hot chocolate in Peru is extraordinary, taken to another level with the addition of cloves and cinnamon. Many households will cook up a big pot of chocolate caliente on purpose so as to have leftovers for breakfast along with a slice of panetón.

What’s panetón you ask? It’s Peru’s answer to the fruitcake, only instead of it being considered a near gag gift, locals eat it almost religiously during the holiday season.